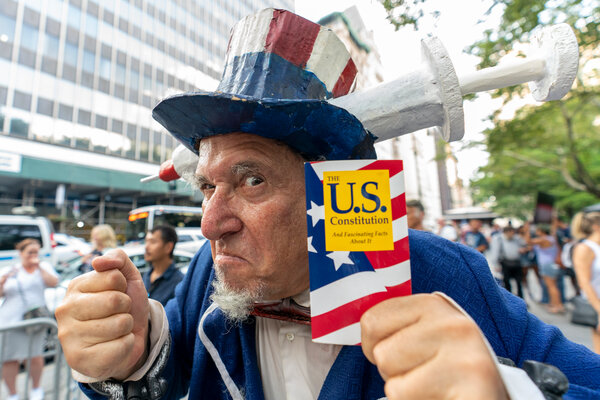 By Gail Collins and Bret Stephens

Ms. Collins and Mr. Stephens are opinion columnists. They converse every week.

But the civil libertarian in me doesn’t love the idea of this or any president using administrative powers to force vaccines on the people who refuse to get them. Your thoughts?

Gail Collins: Well, Bret, if Biden was rounding up the non-vaxxers, having them tied down and inoculated by force — the way many Republicans seem to be drawing the picture — I’d certainly have reservations. But in effect he’s saying that they shouldn’t be allowed in certain places where infection is relatively easy to spread, like workplaces or public buildings.

This is a serious, serious health crisis and I don’t think I’d want the president to content himself with giving pep talks.

And don’t I remember a previous conversation in which you suggested the non-vaccinated didn’t deserve to be allowed in hospitals if they got sick?

Bret: Not exactly, but close. The most elegant policy riposte to the anti-vaxxers — and I mean the willful ones, not the people who simply haven’t had access to the shot or have a compelling medical excuse — is to refuse to allow Medicare or Medicaid to pay their medical bills in the event they become seriously ill. Private health insurers might also follow suit. I accept that people don’t want the government or their employer telling them what to do with their bodies. But these same people shouldn’t expect someone else to bail them out of their terrible health decisions.

I have another reservation about what Biden’s doing. Right now, the vast majority of Covid-related hospitalizations are happening among the unvaccinated, which is further proof the shots work. I understand that puts doctors and nurses under a lot of strain, though Covid hospitalizations seem to be declining and the surgeries that are being put off are mainly elective. Otherwise, I don’t see the latest Covid spike as the same kind of issue it was a year or so ago. It’s gone from being a public-health crisis to a nincompoop-health crisis.