WASHINGTON — A Twitter wag summed it up best: “Matt Gaetz is everything the Republicans were looking for in Hunter Biden.”

We are awash in sordid tales of Gaetz — the Beavis to Donald Trump’s Butt-Head — creating a point system for sexual conquests and showing nude photos of women to other (often appalled) lawmakers on the House floor.

The moment crystallizes Republican hypocrisy. Trump and Gaetz viciously beat up on Hunter Biden, undeterred by their own vices.

As it happens, Hunter begins his new memoir, “Beautiful Things,” with a scene of him watching Gaetz on TV reading a magazine excerpt about Hunter’s addiction into the record of the House Judiciary Committee’s hearing during Trump’s first impeachment.

“‘Again, I’m not … casting any judgment on any challenges someone goes through in their personal life,’ Gaetz continued, as he cast judgment on my personal life. … Trump believed that if he could destroy me, and by extension my father, he could dispatch any candidate of decency from either party — all while diverting attention from his own corrupt behavior. Where’s Hunter?

“I’m right here. I’ve faced and survived worse. … I’m not going anywhere. I’m not a curio or sideshow to a moment in history, as all the cartoonish attacks try to paint me. I’m not Billy Carter or Roger Clinton, God bless them. I am not Eric Trump or Donald Trump Jr.”

Yes, for all his messy, self-destructive behavior, this Hunter has never slaughtered and posed with wild animals or whipped up a crowd for an insurrection.

When the book was announced two months ago, it seemed like another bad calculation by Hunter, sure to overshadow his father’s presidential honeymoon.

But it isn’t. The book, ineffably sad and beautifully written, tears the tabloid face off the story about an American family that has experienced the highest of highs and the lowest of lows. The outline is familiar but the details are wrenching, proving that drugs can drag anyone down, even a famous politician’s privileged son who drove into inner cities to buy crack in his Porsche and who had plenty of Burisma “funny money,” as he called it, to rehab-hop. Even his father, chasing him down a driveway after a family intervention, could not overcome “crack’s dark power.”

Page after page, you wonder: How the hell is this guy still alive?

At 51, Hunter has not lost his knack for getting tangled up in messes. He offered a disingenuous reply in a CBS interview airing Sunday about the notorious laptop he supposedly forgot to pick up from a Delaware repair shop: “There could be a laptop out there that was stolen from me. It could be that I was hacked. It could be that it was the — that it was Russian intelligence.” No one is buying that.

The book recounts a litany of other times he left incriminating evidence in rental cars, got ripped off in drug deals or had his Gucci loafers, $800 sports coat and Rimowa luggage stolen by the “scummy subculture” he was hanging with in Hollywood hotels.

And while he writes that he would not go on the Burisma board if he had to do it over again, because it allowed Trump to target him and his dad, he doesn’t acknowledge that his Ukraine and China dealings were super swampy.

Still, the book illuminates the underworld of addiction — our national shame — that left the son of a vice president and presidential candidate sharing an apartment with his crack connection in the shadow of the White House; sweating, crying, chanting the “Hail Mary,” dropping off the grid to live in a $59-a-night Super 8 motel off I-95, and getting blacklisted by one Hollywood hotel after another because of his “traveling band of vampires” straight out of a Quentin Tarantino movie, “an opaque, sinister night world of interconnected lives that roamed L.A. between 2 a.m. and 8 a.m.,” consisting of “thieves, junkies, petty dealers, over-the-hill strippers, con artists and assorted hangers-on.” Not to mention Samoan gangsters with wild nicknames.

“It was,” he writes, “nonstop depravity.”

Hunter’s odyssey to a “dark, bleak hole” tormented by the “Four Horsemen of the Crackocalypse” is a mythic saga: two brothers, Irish twins so inseparable they were referred to by a single moniker, BeauAndHunt; one who takes the straight path and the other, the crooked one. It is, above all, a love story. A love letter written to his dead brother, his soul mate and protector, Beau.

Even his “shared-grief oasis” romance with Hallie, Beau’s widow, is explained by Hunter as a mistaken belief “that by loving each other we somehow could love him back into existence.”

“I really believe that its trauma and stress contributed to my brother’s health problems,” Hunter writes of the crash. He doesn’t blame his addiction on it, but he writes that the miasma of unease afterward left him always feeling alone in a crowd.

People flocked to Beau, who became known as “the sheriff” in high school; he was the perfect son, husband, father, military officer and public official. He never had a drink until he was 21 and he quit at 30. Hunter had his first glass of champagne at 8, under a table at a party for his dad’s re-election to the Senate in 1978. Beau went to A.A. meetings with Hunter and tried to save him, again and again.

“Eventually it became too much for me to even pour a drink,” writes Hunter. “I’d use a kitchen knife to remove the plastic nub that controls the pour on a handle of vodka, then drink straight from the bottle.”

When Hunter dives into the void in L.A., learning how to cook crack in his Chateau Marmont bungalow, he still manages to write letters addressed to his late brother, telling him how much he would have loved California.

“Did you know there are mountain lions and coyotes here?” he wrote Beau. “I mean RIGHT HERE? I wish we’d both learned to surf. I remember when we used to say that you, me, and Dad were going to ride motorcycles up and down the Pacific Coast Highway. I regret we never did. Love, Hunter.” 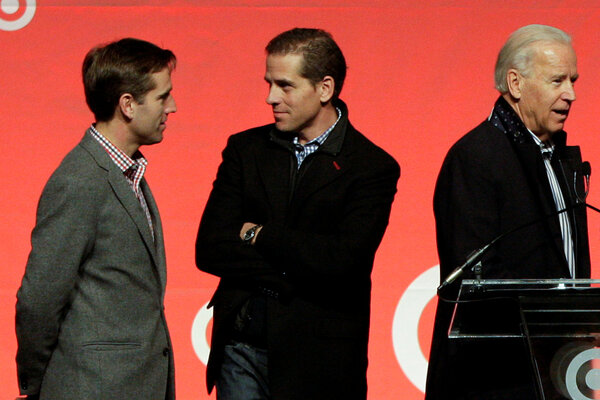