Home » The $1.9 Trillion Question in the Senate

Good morning. The virus relief bill heads to the Senate. We tell you what to watch for. 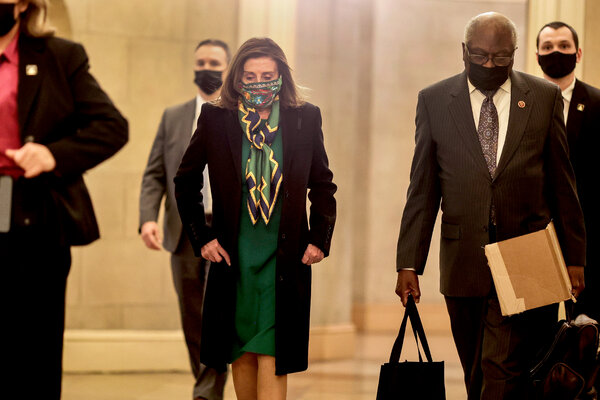 The virus relief bill that the House passed on Saturday heads to the Senate this week, and White House officials hope President Biden will be able to sign it into law in the next two weeks.

Here’s what you need to know about the plan — and the coming debate in the Senate:

The current price tag is about $1.9 trillion — or roughly twice the size (after adjusting for inflation) of the stimulus bill Barack Obama signed shortly after taking office, in 2009. The Senate may shrink it somewhat, but the bill is likely to remain very large.

That reflects the fact that Biden and his aides don’t want to repeat the mistake of the 2009 bill, which many economists believe was too small to prevent a sluggish recovery. This time, Biden is erring on the side of aggressiveness, hoping to return the economy to full employment and spark strong wage growth.

Jerome Powell — the Federal Reserve chairman, appointed by Donald Trump — has avoided talking about the bill’s details but has signaled he supports moving aggressively, rather than focusing on the deficit. One factor: Over the past two decades, forecasters have repeatedly been too optimistic about economic growth — which suggests that policymakers have usually done too little to support growth, not too much.

Roughly half of it is direct cash payments.

The biggest item (costing about $420 billion) is a package of $1,400-per-person checks for most households. Other major items include an expansion of jobless benefits ($240 billion); an expansion of tax credits for parents and low-income workers ($130 billion); health insurance subsidies ($65 billion); and housing assistance ($40 billion).

The other half of the bill is mostly aid to state and local governments, including money for schools as well as for coronavirus testing and vaccination.

The bill is popular.

Polls have found that about 70 percent of Americans support the plan, including a sizable share of Republican voters. The $1,400 direct payments are especially popular. “People need help right now, and I’m OK with my tax dollars doing that,” Melissa Karn, 53, a Trump voter from the Phoenix suburbs, told The Times.

Research by Chris Warshaw of George Washington University suggests that the plan is the most popular piece of major federal policy since a minimum-wage increase in 2007.

Still, no House Republicans voted for the bill, and few if any Senate Republicans are likely to. Many believe that such a large amount of federal spending — following several other stimulus packages last year — is a waste of taxpayer money when the pandemic has already begun to recede. (A few Democratic economists agree.) Congressional Republicans also have a longstanding strategy of opposing any legislation proposed by a new Democratic president, to weaken him by making him look like a partisan figure.

The bill would substantially cut poverty.

Over all, an analysis by the Center on Poverty and Social Policy at Columbia University found that Biden’s proposal (which is similar to the House bill) would reduce poverty by almost 30 percent in 2021, moving 12 million Americans above the poverty line.

Franklin D. Roosevelt didn’t merely try to halt the Great Depression after taking office; he also restructured the U.S. economy, by creating federal programs and strengthening labor unions. Ronald Reagan, coming from the other side of the political spectrum, didn’t merely try to crush inflation; he also transformed the tax code.

The virus relief bill is not on the same scale, partly because most of its provisions would expire over the next few months. Biden has signaled that his next major proposal — known as Build Back Better — is his more sweeping attempt to fix the U.S. economy.

But the current bill may still have some long-term impact. Many Democrats hope that some of the provisions — like the universal monthly payment for children and the expansion of jobless benefits — will prove popular enough that Congress later extends them.

The Senate will alter the House bill.

The Senate will almost certainly remove a minimum-wage increase in the bill. It’s also possible that some Democratic senators will try to restrict how many households are eligible to receive the $1,400 checks — or otherwise reduce the bill’s size.

Ultimately, the Senate and House both need to pass identical bills for Biden to sign one. Many Democrats want to pass a final bill by March 14, when some benefits from an earlier stimulus — like expanded jobless benefits — start to expire.

Under pressure after a second woman accused him of sexual harassment, Gov. Andrew Cuomo of New York said he’d let the state attorney general decide who should lead an inquiry. (Here’s what we know about the claims.)

Cuomo, 63, apologized for making people feel uncomfortable: “I never intended to offend anyone or cause any harm.”

Cuomo is also facing criticism for undercounting nursing home deaths and for his harsh management style.

The number of vaccine doses administered to Americans has surged — it was over 2.3 million on both Saturday and Sunday. A reasonable target is at least three million a day by the end of this month.

Parents are beginning to rebel against closed schools. “It’s a slap in the face consistently,” Aquené Tyler, a mother and hair stylist in Philadelphia, said.

Opening windows will be key to resuming in-person classes. This graphic shows why.

In his first public appearance since leaving office, Donald Trump suggested he may run for president in 2024. (The Times fact-checked his speech.)

Iran rejected an offer to directly negotiate with the U.S. about reviving the nuclear deal that Trump exited.

Soldiers in Myanmar shot and killed at least 18 people who were protesting against the recent military coup.

What’s Clubhouse and who’s on it?

It’s the latest way to listen to people talk. It already has 10 million users, including big names like Elon Musk and Oprah. And Twitter and Facebook are experimenting with similar products.

Clubhouse is an audio app — currently invite only — that features chat rooms where people gather for live discussions about anything. It’s more interactive than podcasts, because listeners can click a tiny hand icon to ask a question (and hosts can boot rowdy participants). It’s also more fleeting, because recording is against the rules.

The topics are endless: karaoke, nuclear power, mental health, racism in medicine and more. The Times columnist Kevin Roose writes that there is “a refreshing randomness to Clubhouse that makes it more interesting than social networks where every piece of content is algorithmically tailored to your exact interests.”

Clubhouse does have some problems, mostly stemming from its lax moderation. The app has hosted discussions with hate speech, harassment and conspiracy theories, and regulators in Europe are worried about its privacy policies.

As our colleagues Erin Griffith and Taylor Lorenz write: “Clubhouse is following a classic Silicon Valley start-up path that social media companies like Twitter, Snapchat and Facebook have also trod: viral growth followed by the messy issues that come with it.”

This spicy beef stir-fry with basil is ready in minutes.

Here are the best and worst moments from last night’s remote awards ceremony, and all the winners.

Welcome to the world of lake surfing — when it’s below freezing.

Diary of a Song

“Drivers License” by 18-year-old Olivia Rodrigo has been the top Billboard song for six weeks. Here’s how she made it.

The pangram from Friday’s Spelling Bee was gullibility. Here is today’s puzzle — or you can play online.

Today’s episode of “The Daily” is about Texas after the storm. On the Book Review podcast, Lauren Oyler talks about her debut novel and Stephen Kearse discusses the science fiction author Octavia Butler.