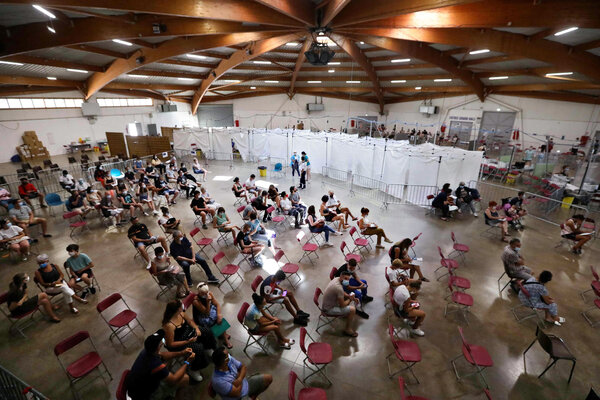 This month, the bloc also overtook the U.S. in first injections — currently, 58 percent to 56.5 percent. Earlier this year, the E.U. faced vaccine shortages while the U.S. rollout was initially more successful.

Some member countries, like France and Italy, have implemented vaccine mandates to try to speed up inoculations. And as campaigns decrease or plateau in some countries, officials are urging younger age groups to get vaccinated.

E.U. rollout: The bloc is vaccinating at a faster pace than most developed countries, while U.S. rates have declined. In Brussels, authorities have set up mobile outreach teams to vaccinate vulnerable people.

U.S. hesitancy: On Thursday, President Biden announced that all civilian federal employees must be vaccinated against the coronavirus or be forced to submit to regular testing. He also directed the Defense Department to study how and when to add the coronavirus vaccine to the list of required vaccinations for all members of the military.

President Rodrigo Duterte of the Philippines said local officials should detain people inside their homes if they refuse the Covid-19 vaccination.

Large companies are revising their masking and vaccination rules as the Delta variant drives up infections in the U.S.

Israel will start giving third doses to people over 60.

Thailand plans to turn a cargo warehouse into an 1,800-bed Covid treatment center at Don Mueang International Airport in Bangkok.

China goes for the top prize

By fielding 413 athletes in Tokyo, its largest ever delegation, China aims to land at the top of the gold medal count. On Thursday, China was tied for the lead at 15 with Japan. It trails the U.S. 31 to 38 in overall prizes — but to China, silver and bronze barely count.

For decades, Beijing has focused on less prominent sports that are underfunded in the West, or sports that offer multiple Olympic gold medals. Women’s weight lifting was an ideal target: A niche pursuit with multiple weight classes, it offers up four potential golds.

Rooted in the Soviet model, China relies on the state to scout tens of thousands of children for full-time training at more than 2,000 government-run sports schools. The assembly line is working. Chinese athletes dominate sports like table tennis, badminton and shooting.

Cost: The public is increasingly wary of the sacrifices made by China’s Olympians. Academic instruction in sports schools remains paltry, and athletes are lucky to see their family a few times a year.

In other Olympics news:

Sunisa Lee, an 18-year-old Hmong American, won the all-around individual competition in gymnastics after Simone Biles withdrew. Here’s how Lee did the moves that got her there.

As the fighters advanced, a small group of ethnic Kyrgyz herders feared their home would be next. The insurgents assured the herders that they could continue their pastoral lifestyle, but fighters made a point of counting the animals, raising concern that they would tax or confiscate the livestock.

About 350 of the nomads tried to seek asylum in Tajikistan, the country that separates the tiny ethnic minority from their brethren in Kyrgyzstan. But their appeal fell through.

Their failed two-day trek highlights growing tensions between Afghanistan and its northern neighbors, who fear the sudden arrival of refugees and cross-border violence. The Biden administration has asked Uzbekistan, Kazakhstan, Kyrgyzstan and Tajikistan to accept as many as 9,000 asylum seekers.

Geography: The herders navigated the Wakhan Corridor, a mountainous panhandle that remained peaceful through the two-decades-long U.S. military presence. Once difficult to traverse, it now has a road, thanks to China’s Belt and Road investment project, which could allow the Taliban to advance.

Chaos: Flash floods killed at least 80 people and destroyed a village in a Taliban-controlled area on Wednesday. Afghanistan consistently ranks as one of the most vulnerable countries in the world to climate change, according to the World Bank.

Asia, Africa and the Middle East

Aid workers say the Ethiopian government has effectively cut off the only road into the Tigray region, which could lead to mass starvation.

The new Chinese ambassador to the U.S., Qin Gang, has a long history of vigorously rebutting Western criticism.

Tunisia is haunted by the serious economic problems that led to the Arab Spring uprisings in 2011.

Slightly embellished news reports that workers in Sri Lanka dug up the world’s largest cluster of sapphires, worth up to $100 million, are delighting a virus-weary public.

The U.S. economy returned to prepandemic size in the second quarter, a much faster rebound than its recovery after the Great Recession.

Turkey is foisting ever-tighter regulations on Google, as an antitrust backlash against Big Tech emerges in places outside regulatory hotbeds.

Robinhood’s stock opened at $38, the same as its I.P.O. price, and then declined, a sign of investor hesitancy.

Cubans who protested against the government two weeks ago now fear detention and arrest amid sweeping crackdowns.

Prime Minister Mario Draghi of Italy is staking his government on a push for judicial reform.

A new paper attempts to quantify the cost of climate change in human life.

Like humans, birds, seals and some insects most likely use the stars to navigate, too.

The $2.7 million Marble Arch Mound was pitched as an Arcadian dreamscape in the middle of London. Instead, visitors got a widely mocked pile of blocky scaffolding and patchy vegetation. Local officials are now offering ticket refunds.

Undoing the damage of ‘Jaws’

A skilled diver and spearfishing champion, Valerie Taylor was one half of the Australian couple whose shark footage featured in the climax of “Jaws.” A longtime shark conservationist, Taylor, 85, is the subject of a new documentary, “Playing With Sharks,” on Disney+.

Taylor began studying sharks after she killed one while shooting a film in the 1960s. She regrets how “Jaws” influenced audiences to fear sharks as bloodthirsty, human-stalking monsters. (Only a few species are known to bite humans, who they often mistake for natural prey.)

Climate change and overfishing have ruined many of the underwater habitats Taylor witnessed, and her arthritis makes swimming in colder waters difficult. Still, she dives.

“I hate being old, but at least it means I was in the ocean when it was pristine,” she said. Today, “it’s like going to where there was a rainforest and seeing a field of corn.”— Sanam Yar, a Morning writer

Make this skirt steak bulgogi, which means “fire meat” in Korean, or try a meatless option with eggplant. While you’re at it, read The Times’s cooking writer Eric Kim on bulgogi’s ancient origins.

“The Green Knight,” starring Dev Patel, is a “sumptuous, ragged and inventive adaptation” of a 14th-century Arthurian romance, our critic writes.

Prince made “Welcome 2 America” in 2010. The previously unreleased album is bleak, disillusioned and distressingly prescient.

Here’s today’s Mini Crossword, and a clue: On the ocean (4 letters).

That’s it for today’s briefing. See you next time. — Amelia

P.S. Read how over two dozen Times journalists worked on a series of articles examining the extraordinary techniques of four Olympic athletes.

The latest episode of “The Daily” is on China’s nuclear arsenal.

You can reach Amelia and the team at briefing@nytimes.com.