By Amelia Nierenberg and Whet Moser

We’re covering an account of carnage in Myanmar, concerns about the AstraZeneca vaccine and a JPG file that sold at auction for $69 million. 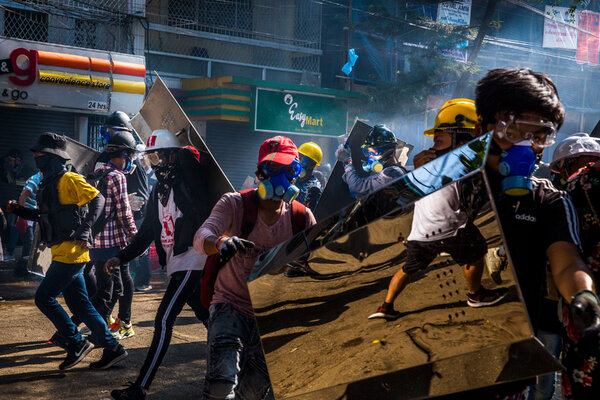 A killing rampage in Myanmar

At least eight people died and 20 more were wounded on Thursday when police officers fired indiscriminately into a cluster of unarmed civilians in Myaing, a small town in the center of the country.

“They were shooting people like shooting birds,” said U Myint Zaw Win, a witness.

The killing comes after weeks of protests during which the military, which has for decades persecuted the country’s citizens, attacked peaceful demonstrators, often without warning.

More than 70 people in Myanmar have been killed by the security forces since the army staged a coup on Feb. 1, ousting a civilian leadership and returning the country to the nightmare of full military rule. On Thursday, Amnesty International released a report exposing that security forces used battlefield weaponry on protesters.

Developing: On Thursday, a military spokesman accused Daw Aung San Suu Kyi, the civilian leader who was ousted in the coup, of having illicitly received 25 pounds of gold and about $600,000. That accusation, and other obscure infractions, could carry a yearslong imprisonment.

Denmark temporarily suspended inoculations of residents with the AstraZeneca vaccine after concerns about links to an increased risk of blood clots. Out of more than 142,000 Danish residents who have received the Covid-19 vaccine, only a few have reported severe cases of clots. One patient died.

“It is currently not possible to conclude whether there is a connection,” Magnus Heunicke, the Danish minister of health, wrote on Twitter. “We acted early, it needs to be thoroughly investigated.” The European Medicines Agency said that there is currently no indication the vaccine “has caused these conditions.”

Austria suspended a specific batch of the vaccine when a patient died after blood clots formed and another was hospitalized with a similar condition. Estonia, Latvia, Lithuania and Luxembourg also suspended the batch. Norway and Iceland suspended the drug altogether, and Italy suspended a separate batch, Reuters reported.

The European Union’s drug regulator approved the Johnson & Johnson vaccine on Thursday. The move comes amid mounting frustration with a sluggish inoculation campaign.

Amid swirling misinformation, Ukraine has struggled to find enough residents willing to get the vaccine. The country’s vaccine hesitancy rate is among the worst in Europe, even among doctors and nurses.

Coronavirus cases in Germany are ticking up, more than half of them caused by the B.1.1.7 variant first discovered in Britain. “We are seeing clear signs: In Germany the third wave has already begun,” the leading public health official said.

China on Thursday approved a drastic overhaul of the election law for Hong Kong, which will most likely bar many pro-democracy politicians from competing in elections.

Beijing plans to add 300 more spots to the election committee that chooses Hong Kong’s local leader and members of its legislature. The move, which builds on a sweeping national security law imposed last year after months of protests, could allow more seats to go to pro-Beijing allies and give them veto power over nominees.

Premier Li Keqiang said the measures were necessary to ensure that “patriots” run the territory. Pro-democracy activists warned that the election law changes would amount to a death knell for the territory’s limited voting rights and could wipe out the already limited democracy that Hong Kong enjoyed after its return to Chinese sovereignty in 1997.

For decades, Egyptian women diligently straightened their curls to fit a Western beauty ideal. Men cropped theirs short, suppressing their natural texture because it was considered slovenly and unclean. Above, the owner of the G-Curls salon in Cairo, Egypt.

In recent years, however, curls have sprouted again around the country, a visible reminder of the subtle shifts in society that many young Egyptians trace to the 2011 revolution. While the government has clamped down on free expression, young Egyptians continue to reject some of the conservative norms of the past, even if only in the way they look.

Coupang IPO: South Korea’s answer to Amazon debuted on Wall Street on Thursday with an initial public offering that raised $4.6 billion and valued the company at more than $102 billion, the second-largest for an Asian company after that of Alibaba Group in 2014.

Royals: Prince William called the royals “very much not a racist family” in his first public comments after his brother, Prince Harry, and his sister-in-law Meghan said in an interview that a family member had raised concerns about their child’s skin tone.

Climate: A global plan to protect 30 percent of the planet’s land and water by 2030, known as 30×30, is backed by dozens of countries. But Indigenous communities, who have preserved biodiversity on their lands by not extracting too much, won’t be deciding on the deal despite experience that could lead the way.

George Floyd: Derek Chauvin, the police officer who held his knee on George Floyd’s neck on a Minneapolis street corner as he gasped for breath, will now face an additional charge of third-degree murder. He had previously agreed to plead guilty to the charge.

Archaeology: A silver diadem, buried 3,700 years ago and found in a Spanish dig, adds evidence to a body of research that women held significant power in prehistoric Europe.

Snapshot: Above, the view from Takata Matsubara Tsunami Reconstruction Memorial Park in the Japanese village of Kesen. All but two of 550 homes were destroyed in the earthquake and tsunami that hit 10 years ago, but 15 residents refused to abandon the village. Twice a year for the past decade, the Times photographer Hiroko Masuike has visited Kesen to document their mission to rebuild.

What we’re reading: This book review in The New Republic that explores how tourism (and our collective disdain of tourists) has shaped our politics, the climate and our personalities.

Cook: Swallows, a starchy West African treat made from yam, cassava, cocoyam or plantain flour, are a labor of love and a satisfying accompaniment to vegetable soups and stewed meat.

Watch: In 1995, Matthew Bourne audaciously reimagined the ballet “Swan Lake” with a flock of feral men. A performance is available for streaming.

Do: Essential oils may be wreaking havoc on your skin. Here’s what’s safe and what’s best to avoid.

Get ready for the weekend. At Home has our full collection of ideas on what to read, cook, watch, and do while staying safe at home.

The craze for NFTs

A JPG file made by Mike Winkelmann, the digital artist known as Beeple, was sold on Thursday by Christie’s in an online auction for $69.3 million with fees. The price was a new high for an artwork that exists only digitally.

Last month, someone bought an animated gif of a flying cat for more than $500,000. So what’s the point of owning them?

It may not make sense to everyone — and has elements of a financial bubble. It mostly comes down to very expensive bragging rights, as well as the potential of reselling the works for more money.

These rights are known as NFTs, short for “nonfungible tokens.” “It seems crazy to do that for something purely digital that can be easily copied and shared across the internet,” Erin Griffith, a Times tech reporter who has written about the trend, told us. “But the popularity of NFTs shows that people are willing to pay for special, scarce collector’s items.”

The technology has made it easier for artists, musicians and sports franchises to make money from digital goods. The N.B.A. recently introduced a series of NFTs, Top Shot, that turn highlight clips into trading cards. In music, the latest album by Kings of Leon is an NFT.

That’s it for this briefing. We’re redesigning this newsletter and will be rolling out our new-look briefing on Tuesday. Stay tuned.

Thank you
Sanam Yar wrote the Back Story. You can reach the team at briefing@nytimes.com.

P.S.
• We’re listening to “The Daily.” Our latest episode contrasts Meghan’s explosive interview with Princess Diana’s BBC sit-down from 25 years ago.
• Here’s our Mini Crossword, and a clue: “____ is friendship set to music”: Jackson Pollock (four letters). You can find all our puzzles here.
• Michael Paulson, our theater reporter, looked ahead to the return of live stage performances to New York City in this WNYC radio interview.