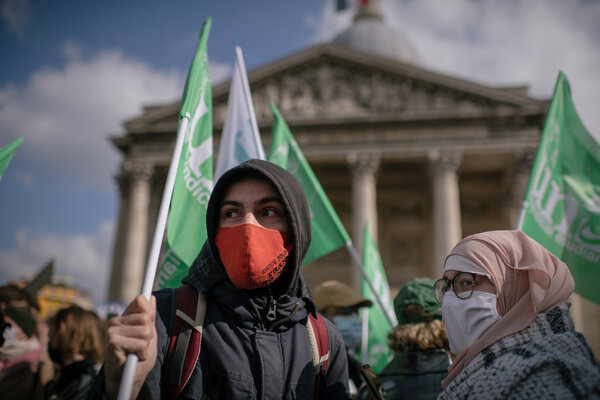 The vanguard of a changing France?

To its critics, France’s 114-year-old university student union, Unef, is the incarnation of American-inspired ideas that threaten France’s founding principles, including the use of “safe space” forums that critics note exclude white people. Its leaders say it is the future.

Controversy over the union has spilled into a third week, melding with larger debates roiling the country.

On Thursday, the French Senate endorsed banning the group and others that organize restricted meetings, and it attached a “Unef amendment” to President Emmanuel Macron’s law against Islamism, a political ideology the government blames for inspiring recent terrorist attacks. The bill has not yet been ratified.

Analysis: “Unef is a microcosm that reveals the debates in the society,” said Lilâ Le Bas, a former president of the group. That debate in France is just starting to address issues like discrimination in earnest, she said, “and that’s why it crystallizes so many tensions and pressures.”

U.S. officials are negotiating with the Taliban in the final weeks before the country is set to withdraw from Afghanistan. Diplomats are trying to build on classified parts of a 2020 peace deal with the group that outlined what military actions were supposed to be prohibited, but experts warn that a deal is unlikely unless the U.S. makes serious concessions.

If these discussions — and the separate talks between the Afghan government and Taliban — falter, thousands of U.S. troops may stay in Afghanistan beyond May 1, the deadline by which all American military forces are meant to withdraw from the country under last year’s agreement.

The deadline comes right as the insurgent group is likely to be engaged in its spring offensive against the beleaguered Afghan security forces. It may have already started, given the series of large attacks and assassinations by the Taliban in recent days. That, too, could set back any progress and send Afghanistan back into chaos.

More than half of Israel’s nine million people — among them Isabel Kershner, a correspondent in Jerusalem for The Times — are getting a taste of a post-pandemic future via the Green Pass system, which allows the fully vaccinated to have freedoms many have not experienced in more than a year.

“I feel a personal sense of lightness and relief as I go about my new, vaccinated life,” she writes. “I even caught myself the other day in the supermarket without my mask on, which is still required in public places.”

But the system, and its enforcement, is imperfect. There are troubling questions about those who are not vaccinated, and noisy debates play out — some landing in court — about the rules and responsibilities of the return to near normalcy. Up to a million people have so far chosen not to get vaccinated.

The new world has also underscored the inequities and divides between societies with more or less access to the vaccine. Most in the West Bank and Gaza are not yet vaccinated, amid a bitter debate over Israel’s legal and moral obligations to those living in occupied territories. Israel has vaccinated about 100,000 Palestinians who work in Israel or in West Bank settlements but has been criticized for not making a greater contribution.

The U.S. is averaging more than three million vaccinations a day for the first time.

Britain reported 30 more cases of extremely rare blood clots in people who had received the AstraZeneca-Oxford vaccine, but it is not clear whether any were linked to the vaccine. Even if they were, British and European regulators have said clots are so rare that the vaccine should continue to be used.

Mount Everest is open for pandemic-safe climbing. Nepal, desperate for tourist money, says it has taken steps to prevent a coronavirus outbreak.

Thousands protested a sweeping crime and policing bill in Britain on Saturday, amid a raging debate over law enforcement tactics.

David Cameron, the former British prime minister, has lobbied the government on behalf of an Anglo-Australian finance firm, Greensill Capital. While apparently legal, his activities set off a debate about lobbying by former leaders.

Exports of chocolate to Europe have turned into a nightmare of paperwork and delays, making fine British chocolate scarce in Europe. Chocolate is the U.K.’s second-largest food and drink export, after whiskey, according to the Food and Drink Federation.

Myanmar’s security forces have killed more than 40 children since February. Here is the story of one, 10-year-old Aye Myat Thu, above. The outright military violence, our columnist writes, is a throwback to an earlier autocratic era resulting from a perfect oppressive storm.

The Jordanian government has arrested high-profile figures, including Sharif Hassan bin Zaid, a member of the royal family, and Bassem Awadallah, a former chief of the royal court, an unusual development in the normally stable Arab kingdom.

Survivors of Friday’s train derailment in Taiwan, which killed at least 50 people, held their loved ones in their arms as they died. Investigators are trying to understand how the accident happened.

A Capitol Police officer was killed and another was injured in an attack at the U.S. Capitol on Friday. The attacker, whom police fatally shot, had been distressed but had no known history of violence.

Thirteen Turkish trainee pilots face life in prison for participating in the 2016 coup attempt, the same punishments as the generals who led the charge. Their families are pushing back, saying they played no part in the events.

Meet Shah Jahan, the Mughal emperor, seen here in an eight-inch miniature, surrounded by calligraphy and flowers of gold. His regnal name translates as “King of the World,” and he was exaggerating only slightly.

This masterpiece belongs to the Metropolitan Museum of Art, which dates it to 1627 or 1628. Its tiny size belies its profound cosmopolitanism — and spellbinding beauty. Here’s a closer look.

Vaccine-ready — but first, let me take a selfie

The vaccine selfie has gone viral, writes Vanessa Friedman, The Times’s chief fashion critic. This is an edited excerpt.

Log in to any social platform, and the picture — a smiling individual, one sleeve rolled up practically to the collarbone, with a medical worker poised to jab a needle into their upper arm — is almost impossible to miss.

“I started seeing vaccine selfies almost as soon as the vaccines were available,” said David Broniatowski, an associate professor at George Washington University. “It was an almost immediate meme.”

And rather than petering out, it seems only to be picking up steam.

The vaccine selfie is both a new phenomenon — and a very, very old one, said Jeanine Guidry, an assistant professor at Virginia Commonwealth University focusing on public health and health communications.

One of the most famous is a 1956 shot of Elvis Presley, then only 21 and a full-fledged teen idol, looking dreamy with his sweater pulled up to get his polio jab. The year before that, a lineup of French models, above, was caught poised to receive their smallpox vaccine, grinning and flashing a bit of shoulder.

At a time when social networks have become one of our primary means of communication, the images are important, not just to get the news out but also to normalize the experience and expand it.

In the drive toward herd immunity, the vaccine selfie plays a key role. No longer simply an expression of vanity or a lifestyle humble brag, it has effectively turned the crowd, witting or not, into health care proselytizers.

The new baking series from Nadiya Hussain is so cheery it might be the cure for seasonal, and perhaps even clinical, depression, writes our critic.

That’s it for today’s briefing. Thanks for joining me. — Natasha

P.S. The word “pajamaville” — how one woman described her late-stage pandemic burnout — appeared for the first time in The Times over the weekend.

The latest episode of “The Daily” is about President Biden’s infrastructure plan.