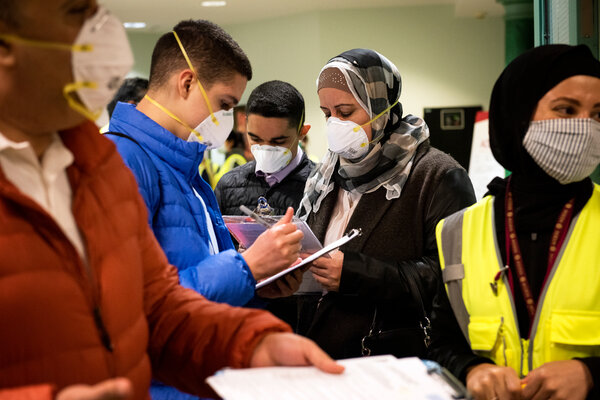 All U.S. adults are now eligible for a vaccine

Hawaii, Massachusetts, New Jersey, Oregon, Rhode Island and Vermont were the last of the 50 U.S. states to expand eligibility to anyone over the age of 16, opening Covid vaccinations to all adults and meeting the deadline that President Biden set two weeks ago.

But vaccine hesitancy continues. And about a fifth of those age 65 and older, a particularly vulnerable group, have not received even one shot. Over the past week, the U.S. has been averaging more than 67,000 new virus cases a day — up from over 54,000 a month ago, according to a Times database.

By the numbers: At its current pace, the U.S. will vaccinate 70 percent of its population by mid-June. As of Sunday, more than 131 million people, or half of all American adults, had received at least one shot. About 84.3 million Americans had been fully vaccinated.

Airports in Australia and New Zealand were filled with emotional scenes yesterday as thousands of passengers were allowed to travel freely between the two countries for the first time in more than a year.

Argentina was already in a recession before the pandemic; now the inflation rate is above 40 percent and more than four in 10 Argentines are living in poverty.

Navalny moved to a hospital

After dire warnings from his doctors, the Russian authorities moved the imprisoned opposition leader Aleksei Navalny to a hospital yesterday for what was described as a treatment with vitamins.

Mr. Navalny has been on a hunger strike for the past three weeks. Over the weekend, doctors said that Mr. Navalny’s blood tests showed a risk of imminent heart or kidney failure. But starvation is only one issue: Mr. Navalny’s lawyers say he may be sustaining the lingering effects of a near-fatal poisoning with a military nerve agent over the summer.

Minneapolis braces for a verdict

The jury in Minneapolis began considering the case against Derek Chauvin, the former police officer charged in the death of George Floyd, after the prosecution and the defense rested their cases.

Businesses boarded up, fearing a repeat of last year’s unrest if the jury brings back a decision that the public sees as unjust. City schools will shift to remote learning on Wednesday, and Facebook said it planned to limit posts that contain misinformation and hate speech related to the trial.

Context: The Times reviewed dozens of cases in which Black people were killed by the police. Very few resulted in convictions.

France played a “significant” role in “enabling a foreseeable genocide,” according to a Rwandan government report — echoing the French government’s own recent appraisal. The new report accuses France of arming, advising and training the Hutu-led Rwandan government as it orchestrated the murder of some 800,000 Tutsi people in 1994.

The Greens party chose Annalena Baerbock as its candidate for chancellor, in what may be the first time the Greens have a significant shot at the position leading Germany, as environmental issues come to the forefront for many voters.

Human rights experts at the U.N. issued a devastating critique of a report on race published by the British government, accusing its authors of repackaging racist tropes, distorting history and normalizing white supremacy.

Firefighters in Cape Town were battling a wildfire yesterday that had engulfed the slopes of the city’s famed Table Mountain and destroyed parts of a university library, above.

Walter Mondale — a Minnesota minister’s son who rose to become a senator and Jimmy Carter’s vice president, before losing the 1984 presidential election to Ronald Reagan — has died at age 93.

A quiet arms race has been heating up between North and South Korea, analysts say, threatening the delicate balance of peace between the two nations.

Prosecutors in the U.S. did not seek to invoke a law that could have kept Brandon Hole — who shot and killed eight people before killing himself at a FedEx warehouse last week — from obtaining firearms, a top law enforcement official said.

Pakistan yesterday urged the Taliban to stay engaged in the Afghan peace process after the group said it would shun summits until foreign troops were gone.

A small robotic helicopter named Ingenuity made space exploration history yesterday when it lifted off the surface of Mars and became the first machine from Earth to fly like an airplane or a helicopter on another world.

The Chinese Communist Party is going into overdrive to celebrate its 100th birthday.

So many people have fled to Syria’s crowded northwest that families have settled in important archaeological sites dating back more than 1,000 years. “We, too, have become ruins,” one refugee said.

Whether you’re a lifelong soccer fan or an outsider who doesn’t know your Manchesters from your Madrids, we have answers to your pressing questions.

First things first: What is a Super League?

The concept has been around for decades as something between an aspiration and a threat: a continental competition that incorporates all of the most famous names from Europe’s domestic leagues every year into an event all their own.

Who gets to play in it?

So far, there are 12 founding members: the teams that have been the driving force behind the project — Real Madrid, Manchester United, Liverpool and Juventus — along with Barcelona and Atlético Madrid from Spain, Inter Milan and A.C. Milan from Italy, and Britain’s Manchester City, Chelsea, Tottenham and Arsenal.

They expect to be joined soon by three more permanent members, along with a rotating cast of five more teams. The 20 teams will be split into two divisions of 10 teams.

Unlike the Champions League, whose roster is set each year based on clubs’ performance in their domestic leagues, the Super League will have permanent members who face no risk of missing out on either the matches or the profits.

Will the Super League teams still play in their current domestic leagues?

That is absolutely their plan. It may not be the leagues’ plan.

Is this about money?

Yes. According to their own estimates, each founding member stands to gain around $400 million — before broadcast rights and commercial income, which could push the number into the billions.

Why is this happening now?

The easy answer is that the pandemic has cost all of Europe’s clubs — including, and to some extent particularly, the wealthy elite — hundreds of millions of dollars in lost revenue. The Super League is designed, to some extent, to offset that.

Can anyone stop it?

As things stand, nothing is off the table — but a long, unseemly legal quarrel seems unavoidable.

Leeks slow-cooked in olive oil are the star of this hearty vegetarian meal.

Each summer along the Alaska coast, millions of salmon begin their journey back to the rivers in which they were spawned. See what it’s like.

You may have already read this viral essay by the musician Michelle Zauner, who performs as Japanese Breakfast, about a Korean grocery store and her mother’s death. Her subsequent memoir, “Crying in H Mart,” covers food, grief and Asian-American identity.

Here’s today’s Mini Crossword, and a clue: Q: What did the buffalo say to his boy when he left? A: ___ (five letters).

That’s it for today’s briefing. Thanks for joining me. — Natasha

P.S. Choire Sicha, who leads our Styles desk, is moving to a new role helping expand our newsletter portfolio.

The latest episode of “The Daily” is about the Iran nuclear deal. 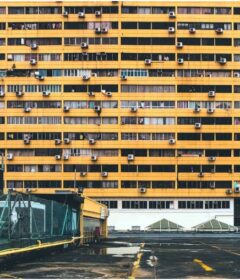