We’re covering the debate around special privileges for vaccinated people, the first sanctions imposed by the Biden administration on Russia and winter surfing. 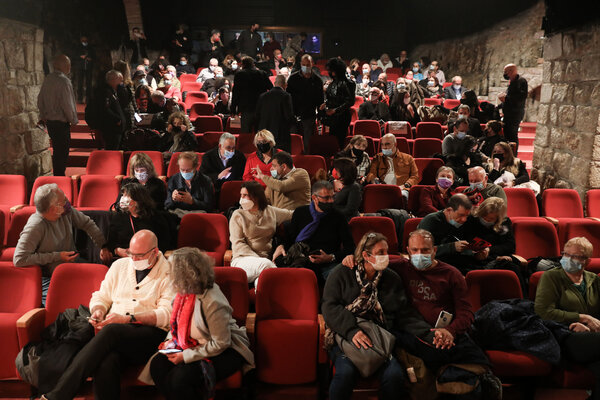 Israel became the first nation to roll out a “green pass,” allowing people vaccinated against Covid-19 to resume normal activities. Several European countries are considering doing the same. Thailand on Tuesday ordered a study on issuing certificates to vaccinated travelers to boost tourism.

The idea is gaining traction as a way to restart economies. But the proposal is also provoking a backlash among those who say vaccine passports will exacerbate wealth gaps and discrimination. Vaccines are already more accessible to wealthy, white communities.

Some versions of the documents might permit bearers to travel internationally. Others would allow entry to vaccinated-only spaces like gyms, concert venues and restaurants.

Context: Some countries already require proof of vaccination against other viruses — for example, yellow fever — to enter. So do schools and day-care facilities in many U.S. states. But there is little precedent for society-wide restrictions.

Quotable: “If vaccines become a passport to doing different things, we’re going to see the communities that have been already hardest hit by Covid being left behind,” said a public health expert.

People in Manaus, Brazil, who had immunity from previous bouts of the coronavirus contracted it again as the P.1 variant spread there, according to three studies. The research has not yet been published in scientific journals. Authors caution that findings on cells in laboratories do not always translate to the real world.

China is aiming to vaccinate 40 percent of its population against Covid-19 by the end of June, a prominent health expert said. But it faces challenges from people reluctant to take it.

The U.S. on Tuesday accused Russia’s F.S.B. intelligence agency of orchestrating the poisoning of Aleksei Navalny, and announced its first sanctions against the Russian government for his poisoning and imprisonment.

The sanctions closely mirrored a series of actions that European countries and Britain took last October and expanded on Monday. U.S. officials said it was part of an effort to show unity in the Biden administration’s first confrontations with the Kremlin.

None of the sanctions were specifically directed at President Vladimir Putin, Russian intelligence chiefs or the oligarchs. The Treasury Department will publish a list of the names of those under sanctions later Tuesday. The administration also declassified intelligence that found the F.S.B. was behind the attack on Navalny.

Dynamics: While many U.S. presidents have come into office declaring they would seek a reset of relations with Russia, President Biden has done the opposite, promising to push back.

What to watch: The Biden administration in the next few weeks is expected to announce its response to the SolarWinds cyberattack, in which suspected Russian hackers bore deeply into nine government agencies and more than 100 companies.

The women were on their way home from work at a local news outlet in Jalalabad when they were attacked on Tuesday. Their deaths come at a perilous time for Afghanistan as security around the country continues to decline.

Mursal Hakimi, 25; Sadia, 20; and Shanaz, 20 — many Afghan people have a single name — worked for Enikass Radio and TV, in a department that records voice-overs for foreign programs. They were killed in two separate attacks, according to a manager at the station.

Context: A television and radio presenter with Enikass was gunned down in much the same way in December. A group affiliated with the Islamic State claimed responsibility for that killing, but has not claimed Tuesday’s attack. The Taliban denied any involvement. They have been blamed for much of the wave of assassinations that followed the February 2020 peace agreement between the insurgent group and the U.S.

‘I didn’t know I had a masterpiece’

In the second such find in a matter of weeks, a New York City nurse rediscovered a long-lost painting by Jacob Lawrence, a leading modernist painter of the 20th century, that had disappeared from public view in 1960. Each painting had hung undisturbed on the walls of two Upper West Side apartments a few blocks apart.

“It didn’t look like anything special, honestly,” said the owner, about Panel 28 from the series “Struggle: From the History of the American People,” above. “The colors were pretty. It was a little bit worn. I passed by it on my way to the kitchen a thousand times a day.”

Carlos Ghosn: Two Americans accused of helping the former Nissan chief escape Japan in 2019 as he faced criminal charges were extradited from the U.S. on Monday to face trial in Japan. Michael Taylor and his son Peter Taylor are accused of moving Mr. Ghosn out of Osaka in a box for music equipment.

Cuomo scandal: A woman accused Gov. Andrew Cuomo of New York of making unwanted advances, saying he asked to kiss her at a wedding in 2019. Her account follows accusations of sexual harassment against Mr. Cuomo from two former aides. He faces an inquiry and calls for resignation.

Nigeria abductions: Kidnappers released hundreds of girls they abducted last week from a boarding school in the northern state of Zamfara. Abductions have become a growth industry during the country’s economic crisis.

Electric cars: Volvo Cars said it would convert its entire lineup to battery power by 2030, phasing out vehicles with internal combustion engines faster than other automakers like General Motors. The automaker, based in Sweden, is owned by Geely Holding of China.

Snapshot: Above, a surfer walks on the icy shores of Georgian Bay in Canada. There’s been a significant increase in the popularity of lake surfing in North America. Unlike ocean surfers, lake surfers rely solely on strong, sustained winds. The stormy winter months often bring the best waves, but also freezing temperatures.

What we’re reading: This poignant essay in Intelligencer about grief, America and the Bidens.

Cook: This rice pudding owes its flavor to the culinary traditions of Iran and Mexico.

Listen: Bach, Brahms and new works by George Lewis are among the highlights from these five classical albums to hear right now.

Do: Pretend you’re in the Riviera Maya in Mexico. You can immerse yourself in Mayan culture from home.

We have helpful hints and smart suggestions in our At Home collection of ideas on what to read, cook, watch, and do while staying safe at home.

A book merger that could be a game changer

Penguin Random House, the biggest book publisher in the U.S., is in the process of buying Simon & Schuster, a deal that would create a megapublisher. But the deal requires approval from the Biden administration — and some authors’ groups and other organizations are calling on the Justice Department to block it, as a violation of antitrust laws.

Critics say the merger would create multiple problems, as our colleague Elizabeth Harris writes. Many authors could receive less money, because fewer publishers would exist to bid on their proposals. Writers without a proven track record might struggle to be published at all, and the industry could become even more dependent on blockbuster titles.

Thank you
Carole Landry helped write this briefing, and Sanam Yar wrote the Back Story. Theodore Kim and Jahaan Singh provided the break from the news. You can reach the team at briefing@nytimes.com.

P.S.
• We’re listening to “The Daily.” Our latest episode is about the U.S. stimulus plan to recover from the pandemic.
• Here’s our Mini Crossword, and a clue: Blue (three letters). You can find all our puzzles here.
• The Times announced the hires of three experienced journalists for its Live News desk.