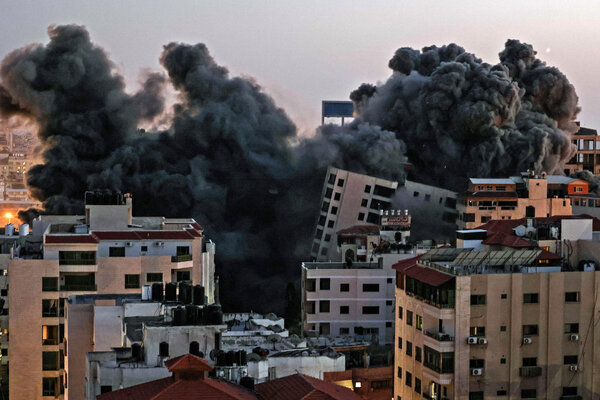 The worst fighting between Israelis and Palestinians in seven years intensified last night, resulting in the deaths of at least 30 Palestinians, including 10 children, and three Israelis. Hundreds more civilians were wounded, according to local officials on both sides.

Israeli airstrikes began targeting Hamas offices in apartment buildings in Gaza City, while militants in Gaza fired back at Tel Aviv, Israel’s economic center. In Israel’s Arab neighborhoods, Palestinian citizens of Israel expressed fury at the killings and longstanding complaints of discrimination inside Israel itself. See footage from the scene in Gaza.

The Palestinian militants and Israeli military are unevenly matched — the former armed with crude rockets, the latter with fighter jets and a sophisticated antimissile defense system, the Iron Dome. Israeli airstrikes aim for strategic targets in densely populated Gaza, killing civilians even as Israel insists it takes measures to avoid them, while Hamas’s rockets aim for civilian population centers but often miss the mark.

Analysis: Leaders on both sides have seized upon the conflict to further their own interests. “It is the story of every previous war between Israel and Hamas,” said Ghassan Khatib, a politics expert in the occupied West Bank. Both governments “come out of it victorious, and the public of Gaza comes out of it as losers.”

Biden administration: The U.S. president had hoped to shift America’s foreign policy focus away from the Middle East. But this conflict may force him to get involved.

Even as the virus recedes in wealthy nations with robust vaccination campaigns, it threatens to swamp Southeast Asian countries like Cambodia and Thailand that had until now largely fended it off.

In India, desperation is spreading as deaths and health care breakdowns that began in big cities a few weeks ago rapidly advance into rural areas with fewer resources. Dozens of corpses washed up on the banks of India’s Ganges River along the boundary of Bihar and Uttar Pradesh, two states where the virus is raging.

Taken together, the opposing regional trends add up to a leveling of global daily new cases at “an unacceptably high plateau” that leaves the world in continuing danger, the director general of the W.H.O. said on Monday.

By the numbers: About 772,000 new cases are reported on average each day globally, nearly half of them in India, where the virus variant B.1.617 has been spreading.

The pharmaceutical company Novavax announced that its highly protective vaccine would not be authorized in the U.S. or Britain until at least July and that it would not reach peak production until the end of the year.

With Europe’s vaccine campaign stymied, some American expatriates have opted to travel to the U.S. to be inoculated. Here’s one account.

China’s latest once-a-decade census showed that the country’s population is growing at its slowest pace in decades. Only 12 million babies were born last year in a nation of 1.41 billion, according to the latest census — the fewest since 1961, and a fresh sign of a looming demographic crisis.

China’s economy has long relied on a huge population and a growing pool of young workers. But economic growth will be hard to maintain if the labor pool keeps shrinking. Births have now declined for four consecutive years.

Many of China’s demographic problems stem from the one-child policy Beijing imposed in 1980 to tamp down population growth, enforcing it with sometimes draconian measures. The census results could compel Xi Jinping, the country’s leader, to reckon with the failings of the ruling Communist Party’s family planning policy.

Key factors: The costs of raising children and delays in marriage among educated women are among the other reasons people in China are having fewer children. The divorce rate has also risen consistently since 2003.

Analysis: “China is facing a unique demographic challenge that is the most urgent and severe in the world,” said a research professor of applied economics at Peking University. “This is a long-term time bomb.”

Nine people died in a shooting at a school in central Russia. Officials said a 19-year-old suspect was in custody. President Vladimir Putin ordered a tightening of the nation’s already strict gun laws.

Queen Elizabeth II opened her 67th Parliament, making her first public appearance since the funeral for her husband, Prince Philip.

As Myanmar marked 100 days of junta rule, protesters gathered again across the country. Singapore’s foreign minister said that the army needed to cooperate, show restraint and start a dialogue with its opponents.

The Biden administration approved the nation’s first major offshore wind farm off the coast of Massachusetts. Together, the 84 turbines could generate enough electricity to power about 400,000 homes.

A Lutheran pastor in California became the first openly transgender person to be made a bishop in a major American Christian denomination.

New anti-obesity drugs appear to elicit significant weight loss in most patients, approaching that of bariatric surgery. Experts hope the drugs will also help end the stigma around being obese.

A new study questions the theory that humans can have no more than about 150 meaningful relationships, a measure that has became known as Dunbar’s number.

A man who ventured out on a glass-bottom bridge in China was left clinging to the side for dear life after gale-force winds blew away some floor panels.

Despite vigorous opposition from prominent writers, artists, academics and heritage groups, one of Dublin’s most beloved Joycean landmarks is set to become a hostel, dashing hopes that it could be preserved as a cultural space.

“This is like selling the family jewels — like giving them away, really,” said John McCourt, who led the campaign to preserve the 18th-century townhouse, the setting for the final short story in Joyce’s collection “Dubliners.”

An overlooked artist with range

Sophie Taeuber-Arp blurred the boundaries between fine art and applied art, but she died early without the recognition she deserved. A major new exhibition in Basel, Switzerland, aims to fix that, writes Catherine Hickley, a reporter for The Times. This is an edited excerpt.

In 1918, three daring marionettes in a production of “King Stag” were met with skepticism by their Zurich theater. But art circles around the world saw them rather differently: In Europe, they were depicted and discussed in avant-garde magazines; across the Atlantic, Vanity Fair noted in 1922 that these “revolutionary” puppets had “caused a real sensation.”

The marionettes were made by Sophie Taeuber-Arp, a Swiss artist with jaw-dropping range across many media: costumery, sculpture, interior and furniture design, dance, painting — and, of course, puppets.

Her capacity to blur the boundaries between fine art and applied art is one of the reasons it has taken her so long to receive a major retrospective that would cement her international reputation as a pioneer of abstraction, said Anne Umland, a curator at the Museum of Modern Art in New York. “She is hard to pigeonhole,” Umland said.

That comprehensive exhibition, “Sophie Taeuber-Arp: Living Abstraction,” opened at the Kunstmuseum Basel in March and runs through June 20. It will move to the Tate Modern in London from July 15, and to MoMA from Nov. 21.

It is Eid al-Fitr tonight, the end of Ramadan and a celebration of breaking the fast. Here are recipes to celebrate, including namoura, a syrup-soaked Lebanese cake.

Stacey Abrams, the Georgia politician and romance writer, describes the book she would recommend to the president as “a seminal work on the nature of power.”

Lambrusco, the gently sparkling and often budget-friendly wine, is the tipple of choice in Emilia-Romagna. It’s great in a briny spritz.

Here’s today’s Mini Crossword, and a clue: Walk like a peacock (five letters).

That’s it for today’s briefing. Have a peaceful Wednesday. — Natasha

P.S. Valerie Hopkins, who has covered Central and Eastern Europe, will be joining our Moscow bureau.

The latest episode of “The Daily” is about the feud between Apple and Facebook. 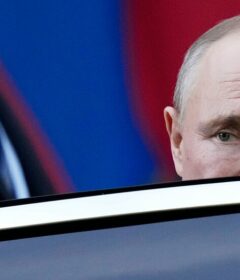 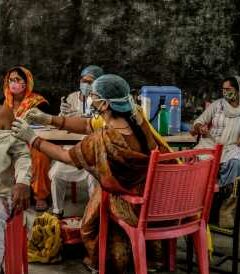