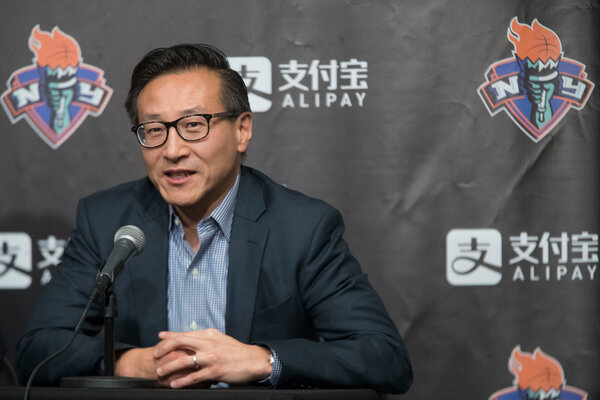 Top business leaders and corporate giants are pledging $250 million to a new initiative and an ambitious plan to stem a surge in anti-Asian violence and take on challenges that are often ignored by policymakers, Andrew and Ed Lee report in The Times.

Donors are a who’s who of business leaders. Individuals who are collectively contributing $125 million to the newly created Asian American Foundation include Joe Bae of KKR, Sheila Lirio Marcelo of Care.com, Joe Tsai of Alibaba and Jerry Yang of Yahoo. Organizations adding another $125 million to the group include Walmart, Bank of America, the Ford Foundation and the N.B.A. The initiative has echoes of the recent effort by Black executives to round up corporate support to push back against bills that would restrict voting.

Anti-Asian hate crimes jumped 169 percent over the past year; in New York City alone, they have risen 223 percent. And Asian-Americans face the challenge of the “model minority” myth, in which they’re often held up as success stories. This shows “a lack of understanding of the disparities that exist,” said Sonal Shah, the president of the newly formed foundation. For example, Asian-Americans comprise 12 percent of the U.S. work force, but just 1.5 percent of Fortune 500 corporate officers.

The group’s mission is broad. It is aiming to reshape the American public’s understanding of the Asian-American experience by developing new school curriculums and collecting data to help influence public policy. But its political lobbying efforts may be challenged by the enormous political diversity among Asian-Americans, Andrew and Ed note.

India’s Covid-19 crisis deepens. The country recorded nearly 402,000 cases on Saturday, a global record, and another 392,000 on Sunday. A business trade group is calling for a new national lockdown, despite the economic cost of such a move. The C.E.O. of India’s biggest vaccine manufacturer warned that the country’s shortage of doses would last until at least July.

Credit Suisse didn’t earn much for its Archegos troubles. The Swiss bank collected just $17.5 million in fees last year from the investment fund, despite losing $5.4 billion from the firm’s meltdown in March, according to The Financial Times.

Verizon sold AOL and Yahoo. The telecom giant divested its internet media business to Apollo Global Management for $5 billion, and will retain a 10 percent stake. It’s a sign that Verizon is giving up on its digital advertising ambitions and focusing on its mobile business.

Manchester United fans are still mad about the failed Super League. Supporters of the English soccer club stormed the field yesterday, forcing the postponement of its highly anticipated match against Liverpool. They called for the ouster of the Glazer family, United’s American owners, over their support for the new competition meant mostly for European soccer’s richest teams.

Succession hints and other highlights from Berkshire’s meeting

At the annual meeting of Berkshire Hathaway on Saturday, Warren Buffett and Charlie Munger spoke out on a typically broad range of topics, from investing regrets to politics to crypto. (They also picked fights with Robinhood and E.S.G. proponents, for good measure.) Buffett watchers also got their clearest hint yet as to who will succeed the Oracle of Omaha as Berkshire’s C.E.O. when the 90-year-old billionaire finally steps down.

It’s Greg Abel. CNBC confirmed with Buffett that Abel, the 59-year-old who oversees Berkshire’s non-investing operations, would take over as C.E.O. “If something were to happen to me tonight it would be Greg who’d take over tomorrow morning,” Buffett said. Charlie Munger, Buffett’s top lieutenant, dropped a hint on Saturday, saying, “Greg will keep the culture.”

Buffett took on Robinhood. The Berkshire chief said the trading app conditioned retail investors to treat stock trading like gambling. “There’s nothing illegal about it, there’s nothing immoral, but I don’t think you’d build a society around people doing it,” Buffett said.

Robinhood pushed back. “There is an old guard that doesn’t want average Americans to have a seat at the Wall Street table so they will resort to insults,” tweeted Jacqueline Ortiz Ramsay, the company’s head of public policy communications.

And Buffett got blowback on E.S.G. Berkshire shareholders followed his lead and rejected two shareholder proposals that would have forced the company to disclose more about climate change and work force diversity. But each proposal got support from a quarter of Berkshire shareholders, a relatively high percentage. And big investors spoke publicly about their backing for the initiatives: BlackRock, which owns a 5 percent stake in Berkshire, said the company hadn’t done enough on either front.

Other highlights from the Berkshire meeting:

Munger let loose on crypto. “Of course I hate the Bitcoin success and I don’t welcome a currency that’s so useful to kidnappers and extortionists,” he said. “I think the whole damn development is disgusting and contrary to the interests of civilization.”

Ajit Jain, who oversees Berkshire’s insurance operations, and Buffett traded quips about whether the company would insure Elon Musk’s trip to Mars. “This is an easy one: No, thank you, I’ll pass,” Jain said. Buffett said it would depend on the premium and added, “I would probably have a somewhat different rate if Elon was on board or not on board.”

“We will not be anywhere near as focused on buybacks going forward as we have in the past.”

— Intel C.E.O. Pat Gelsinger told CBS’s “60 Minutes” that in the future the semiconductor giant would focus less on buying its own shares and more on expanding production capacity to alleviate severe chip shortages.

Ted Cruz has sworn off corporate donations, and he used an op-ed in The Wall Street Journal to tell executives about it. The Republican senator from Texas criticized company chiefs for what he said were ill-informed criticisms of Georgia’s new voting laws. “For too long, woke C.E.O.s have been fair-weather friends to the Republican Party: They like us until the left’s digital pitchforks come out,” Cruz wrote. These companies “need to be called out, singled out and cut off,” he added.

Cruz’s rejection may not make a big difference. After the Capitol riot on Jan. 6, many corporations pledged to withhold donations from lawmakers who voted against certifying the election results, at least for a period of time. Cruz, who is viewed as a key player in the efforts to reverse the vote, could be shut out for longer than others. But he’s not strapped for cash: He brought in more than $3 million in campaign funds in the three months after the riot, largely from individual donors.

It highlights a new schism between Republicans and corporate America. Those ties were already fraying under President Trump’s unpredictable administration. President Biden’s proposed tax hikes and regulatory push would have typically driven companies into the arms of Republican allies, but Cruz, for his part, said he’s no longer interested in what the corporate donors and lobbyists have to say. “This time,” he wrote, “we won’t look the other way on Coca-Cola’s $12 billion in back taxes owed. This time, when Major League Baseball lobbies to preserve its multibillion-dollar antitrust exception, we’ll say no thank you. This time, when Boeing asks for billions in corporate welfare, we’ll simply let the Export-Import Bank expire.”

Today, Apple and Epic Games meet in court for a trial that could have implications for the future of the App Store and the antitrust fight against Big Tech. DealBook spoke with Jack Nicas, a technology reporter for The Times, about what’s at stake.

Why is Epic suing Apple?

Many companies, including Spotify and Match Group, have complained loudly and publicly about the control that Apple has over the App Store, and the 30 percent commission it charges. Epic basically set some bait for Apple: It began using its own payment system in Fortnite, a very popular game, which meant Apple couldn’t collect its commission. It knew how Apple would react: Apple kicked Fortnite out of the App Store. Then Epic immediately sued Apple in federal court, and simultaneously launched a sophisticated PR campaign to paint Apple in a bad light. [Epic is suing Google for the same reason.]

Why do businesses that aren’t Epic or Apple care about this case?

If you’re a company that sells any digital goods or services, whether a game, music or a dating platform, you likely pay a large share of your revenues to Apple. If Epic wins here, that could eventually put an end to Apple’s commissions, or at least cause Apple to loosen its control over the App Store. So it really would upend the economics of the app industry. And beyond that, an Epic win would boost the push for antitrust charges against some of the biggest tech companies, including Apple.

Now on the other side, if Apple wins, it’s really only going to bolster its already strong position.

Who is expected to win?

It’s certainly unclear at this point, but there is a thinking among legal experts that Apple has the upper hand, and that’s in large part because in antitrust fights, courts are more sympathetic to the defendants. But some legal experts think that Epic’s case could be strong.

What will you be watching for?

The C.E.O.s of both companies, Tim Sweeney and Tim Cook, will be testifying at the trial. Sweeney will likely have to explain why Epic is suing Apple and Google, but not Microsoft and Sony and Samsung and Nintendo, which charge very similar commissions and have similar rules. And Cook will have to answer some very pointed questions about how Apple does business, and how it potentially creates rules in its App Store to hurt rivals. I think there’s an opportunity for the lawyers on Epic’s side to elicit some interesting answers from him.

Read the full report about the case from Jack and Erin Griffith.

Dell agreed to sell its Boomi cloud business to the investment firms Francisco Partners and TPG for $4 billion. (Reuters)

Legendary Studios, the producer of movies like “Godzilla vs. Kong,” has reportedly held talks to either merge with a SPAC or buy another studio. (Bloomberg)

As the head of the nonprofit Venture for America, Andrew Yang pledged to create 100,000 jobs nationwide. The group created about 150. (NYT)

An internal Amazon report warned management that its sales team had gained unauthorized access to third-party seller data, which may have been used to help its own products. (Politico)

Tesla is reportedly stepping up its engagement with Beijing officials as it faces greater pressure from the Chinese government. (Reuters)

Eli Broad, the billionaire businessman and art collector who reshaped Los Angeles, died on Friday. He was 87. (NYT)