The saleswoman waited for Yang Jinzhong at the bus stop. She took Ms. Yang for a tour in her car. With every call and meeting, the saleswoman made the same pitch: By investing just a little bit of money, Ms. Yang could secure a spot in a retirement home at a great price and make some extra cash to boot.

Ms. Yang, 78, was reluctant. Then her husband suffered a brain hemorrhage and lost his ability to speak. In China, where the population is graying with stunning speed, space in affordable retirement homes is hard to find. In the end, Ms. Yang gave $31,000, her life savings, to the retirement company.

Now the saleswoman’s company is one of hundreds of recent cases that are under investigation or have been prosecuted by Chinese authorities who have grown increasingly concerned about retirement home scams. Their inquiries so far cover hundreds of millions of dollars in money raised with the promise of securing a room or a bed. The problem has become so widespread that China’s top judicial bodies have labeled the retirement industry one of the sectors hardest hit by what they call illegal fund-raising.

In Yiyang, the city where Ms. Yang lives, a retired handyman was so distraught after losing his life savings that he threw himself into a river last month and drowned, according to state media.

Ms. Yang doesn’t know if she will ever get her money back. She now depends on a small monthly retirement check. “Otherwise,” she said with a quiet laugh, “how could I live?”

China’s looming elder-care crisis has provided an opening for fraudsters and Ponzi-like investment schemes. By 2025, more than 300 million people in China will be 60 or older, according to the Chinese government. By 2050, that number is estimated to rise to half a billion.

Traditionally Chinese families have taken care of elderly parents. In the wake of China’s now-defunct one child policy, and because of mass migration to big cities, fewer people can care for the growing gray population. The government provides care to only the most vulnerable, known as the “three no’s” — those with no family, no financial support and no ability to work.

“We have a continuously aging population, and government-funded public services are not enough to look after this population,” said Dong Keyong, a professor at the School of Public Administration and Policy at Renmin University of China in Beijing.

China’s government has turned to the private sector, promising subsidies and tax benefits for companies that build homes. But the cost of building a nursing home is high, and the rewards are often too low because most people cannot afford high-quality care. In Beijing, for example, the monthly bill at retirement homes can be as high as $1,500, according to one report, triple the average retirement paycheck of $535 a month.

To surmount those challenges, some builders skirt laws that forbid them to accept money from residents before the retirement homes are built. Instead of preselling a home or a bed directly, those builders create side investment products that promise high interest rates in addition to future membership benefits.

The authorities and elder-care experts say financial products often turn into Ponzi-like schemes. Money raised from later investors is sometimes used to pay earlier investors. If they can’t presell enough homes or beds to start construction, the project evaporates — and so does the money.

The failures have become so severe that Chinese officials have stepped in. China Central Television, the state broadcaster, recently called retirement investment funds with high returns a “fairy tale.”

More than a thousand criminal cases have been filed against companies selling retirement services over the past four years, according to public records. One company, Yi Lao Lin, in the northern city of Shenyang, promised monthly returns as high as 24 percent and future membership to a luxury retirement resort with a gym, an entertainment center and hospital facilities. It raised nearly $5 million from more than 370 people, according to Chinese court officials, before vanishing into thin air. 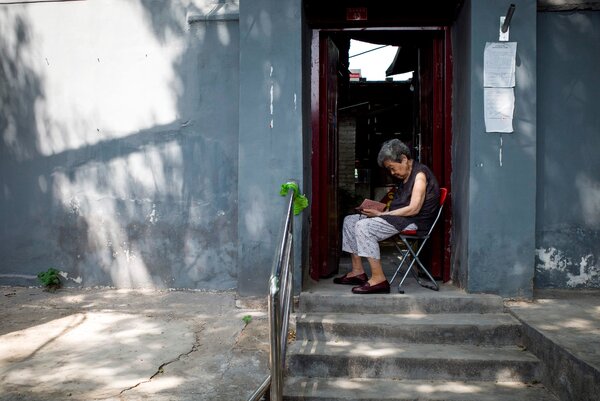 Another company, Shanghai Da Ai Cheng, raised more than $150 million through investment funds that offered an annual return of 8 to 25 percent and admission to a retirement home. Three years after the program started, investors stopped receiving regular interest payments and learned that their original investment was gone. In all, more than $81 million disappeared, according to the authorities.

The police in Hunan Province investigated 45 cases involving $540 million over two years and identified an additional 37 private retirement homes that may have been raising funds illegally, according to Xinhua, the state news agency.

Despite the problems, retirement homes remain lightly regulated, experts said. Officials have focused on the quality of elder care but not the financing methods, said Chan Wing-Kit, an associate professor of social policy at Sun Yat-sen University.

The government has encouraged companies to build China’s elder-care industry and opened the sector to foreign investment. As a result, many of these projects get glowing coverage by state media. Local officials often lend their support with highly publicized visits to construction sites.

Five people interviewed by The New York Times who said they had lost the money through similar investment products complained that the companies they invested in were heavily covered by local media, leading them to believe that projects had official support.

Chen Shaohua, 54, was intrigued by a retirement home in Chenzhou, a city in Hunan Province, that offered medical care and a proprietary bee therapy that claimed to be steeped in traditional Chinese medicine. Ms. Chen first learned about the home from a local broadcaster that covered a visit to the home by government officials.

She pooled together more than $37,000 with her sisters to secure beds for her mother and mother-in-law, both in their 90s. Then, on Jan. 6, the local police opened an investigation into the company for illegal fund-raising.

“They had the government endorsement and the news had hyped it up, and there were many salespeople to sell it,” Ms. Chen said.

“It may have been a scam from the beginning,” she added.

Seniors in rural areas could be especially vulnerable. They often live alone because their children have moved to big cities for jobs. About 16 million elderly people had been left behind in rural areas, according to a 2016 survey by the Ministry of Civil Affairs.

Many older adults “don’t have the financial resources to pay for long-term care services and they don’t have children who can provide the care for them, so they are basically stuck,” said Bei Wu, a professor of public health at New York University who has studied China’s elderly for three decades.

The police in the city of Yiyang are investigating Heng Fuhai, the company that Ms. Yang invested in, and Yiyang Nanuo Senior Apartments, the company that took money from Cao Yinglin, the retired handyman who threw himself into the river last month. The authorities have asked those who invested to provide more information and have said they will try to minimize the losses of investors. But Ms. Yang is doubtful.

Heng Fuhai and Nanuo Senior Apartments did not respond to requests for comment. The telephone number for Nanuo has been disconnected. An employee at Heng Fuhai hung up the phone.

“She acted like a daughter, a daughter I gave birth to,” Ms. Yang said. “She was even more affectionate toward me than my children. It felt like that it would be too embarrassing to say no.”

Now Ms. Yang is just grateful for the small monthly retirement money she receives. If not, “then I would have to do what old Mr. Cao did,” she said. “It just takes one jump.”