The British manufacturer of the next coronavirus vaccine likely to be approved for general use in the UK has called on international governments to cooperate to ensure the global rollout is not interrupted by disputes.

The UK has ordered 60 million doses of the Novavax vaccine, which was developed in the US but will be produced in part by Fujifilm Diosynth Biotechnologies at its facility in Billingham on Teesside.

Production has already begun pending approval by the medicines regulator, and Fujifilm Diosynth’s chief executive Martin Meeson told Sky News he was confident they would be able deliver if supply chains are not interrupted. Asked if he was concerned about the implications of tension over supplies between the EU, the UK and AstraZeneca, including the threat of export bans, he said: “Obviously it’s a concern and one of the things I’ve been advocating constantly is a continued level of partnership.

“The pharmaceutical industry has done a fantastic job worldwide collaborating to make sure the components and the drugs that are being manufactured are exactly where they need to be.

“I’m hoping that collaboration can continue across borders as well as across companies.

“As you are aware there is a particular pull on the pharmaceutical supply chain at the moment, many people are rushing to do as much as they possibly can in the fight against the pandemic.

“We are seeing some of that, but so far we are managing.”

Mr Meeson’s comments came as the European Commission threatened AstraZeneca with legal action for failing to meet commitments to deliver up to 300 million doses of its vaccine by June. 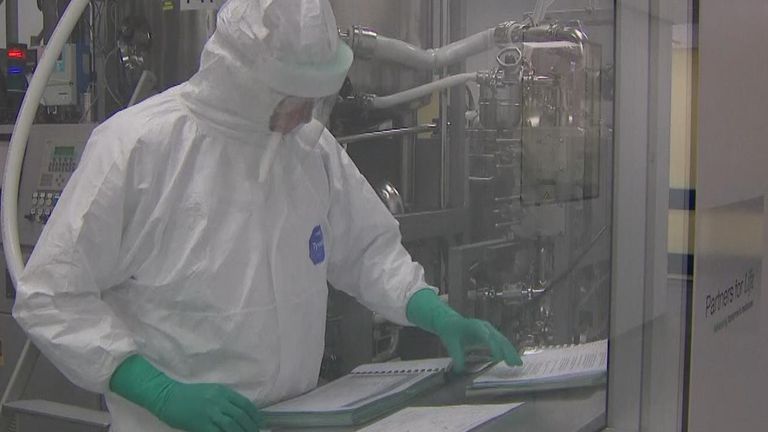 In contrast, Fujifilm Diosynth is confident that its Novavax production targets are robust.

It says trial production that began in February has already demonstrated that millions of doses can be manufactured each month.

“This is something we are going to be injecting into friends, family, colleagues, people so the level of control we have is extremely high and we are very confident we will be able to control and make this vaccine correctly,” Mr Meeson said.

Novavax is a small American biotechnology company pushed to the forefront of the pandemic effort after successful trials of its vaccine, which uses protein found in moth cells to grow genetically modified coronavirus spike proteins.

It received $1.6bn from the US Operation Warp Speed funding programme, and the UK Vaccine Task Force offered to assist with further clinical trials and production.

Fujifilm Diosynth is manufacturing the vaccine at two US locations, in Texas and North Carolina, as well as in Billingham, which will be able to produce 180 million doses a year once equipment has been upgraded.

When completed the vaccine will be finished and bottled at a GlaxoSmithKline facility in Barnard Castle, 30 miles west of Billingham.

The active ingredient is made in 2,000 litre bioreactors and currently batches of up to two million doses take 40 days to grow, a process that could be cut to five days.

The plant is currently working on three batches that will be examined by the Medicines and Healthcare Products Regulatory Agency in one of the final stages before receiving emergency use approval.

It is hoped this could be granted by July, enabling Novavax to be deployed among young adults, particularly under-30s advised not to have the AstraZeneca jab because of links to rare blood clots, and potentially in the autumn if third ‘booster’ doses are advised.

The AstraZeneca vaccine is also made in the UK, with production in Oxford and Keele in Staffordshire, with final bottling in Wrexham.

Anthony Harnden, deputy chair of the Joint Committee on Vaccination and Immunisation, said the Novavax vaccine offers flexibility to the UK rollout.

“It’s a protein subunit vaccine similar in many ways to the flu vaccines we’re used to and it’ll be an excellent addition to our portfolio to enable us more flexibility with the programme moving forward and potentially for any booster doses we decide later on in the year.

“Like all these vaccines, the more that we can manufacture in the UK, the better potentially it is procuring them for the UK population.

“All vaccines are an international effort but increasing our manufacturing basis in this country for vaccinations can only be a good thing.”