With all of its COVID-19-related issues, crime, dirt and disagreeable local politics, New York City needs all the support it can get, and there’s at least some emanating from one of its hometown retail institutions — Bergdorf Goodman.

The store unveils today “Love Letters to New York,” an assemblage of letters from celebrities from different walks of life, expressing their feelings about New York and some special moments they’ve had in the city.

In an excerpt from his love letter to New York, curator Isolde Brielmaier wrote: “I came to you with a dollar and a dream. I spent that dollar and my dream flourished…”

Designer Joseph Altuzarra wrote: “I was born and grew up in Paris and yet I feel more myself in New York City. I remember holding the keys to my very first New York apartment and feeling for the first time like I belonged…”

Michael Kors wrote: “You are my home and constant inspiration. You have been my lucky charm. My career started on 57th Street and Fifth Avenue and everything about me as a person and as a designer continues to be imbued with your spirit…”

New Yorkers and NYC aficionados from wherever can share their own love letters to New York by visiting the initiative’s dedicated landing page, which will showcase various letters, photo and film content and fashion collections available via the e-commerce platform, or by visiting the store and writing a letter there.

“It’s building upon our ‘It’s a New York Life’ campaign back in May, but this brings more voices to the table. We wanted to continue using people of diverse lifestyle, icons, cultural tastemakers, designers and others with inspiring voices,” said Elle Strauss, vice president of creative and brand marketing at Bergdorf Goodman. “Everyone has this incredible appreciation for New York so we wanted to give them the chance to share their personal and profound experiences.

“Writing letters — it’s something no one really does anymore.” 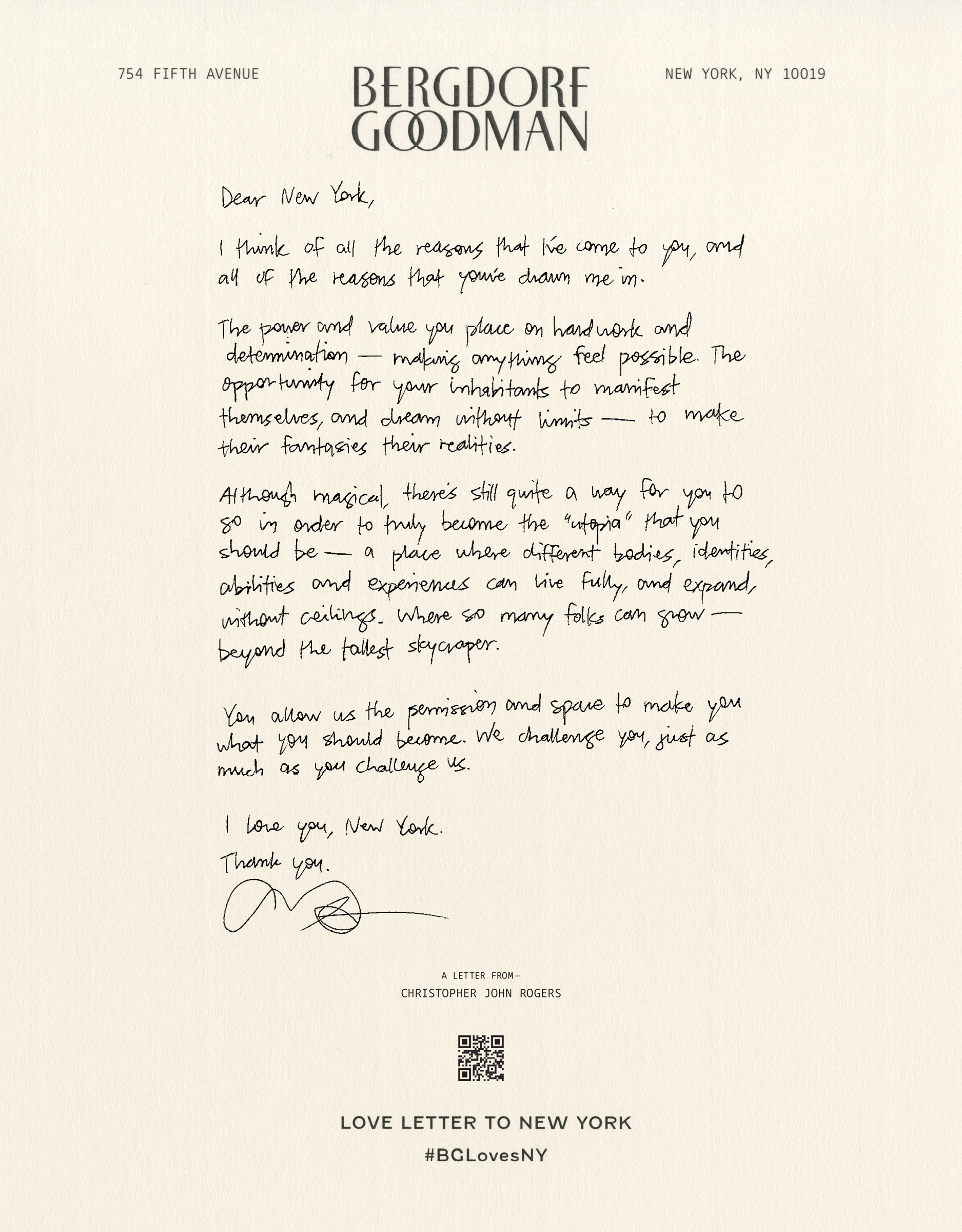 For “Love Letters to New York,” Bergdorf’s has created a multimedia, multichannel campaign. “It’s an immersive experience,” Strauss said, that’s inside the store, in windows, and outside on the corner of 58th Street and Fifth Avenue, where there will be a tunnel-like setup with letters covering the scaffolding. There’s also a desk where visitors can pen letters and send them off in a BG mailbox. Inside, letters will dangle from the ceiling, creating an Instagrammable moment.

Online, BG asks a series of questions, like what’s your favorite New York icon and favorite BG moment, so the copy is controlled. At the store, you can write whatever you want. There, BG only prompts the writer with a few questions.

BG has developed a custom Instagram filter, led by Linda Fargo, senior vice president of the fashion office and store presentation, that transports the user into BG’s Fifth Avenue windows.

To round out the digital experience, there will be a series of stickers which Instagram users can play with while posting their own love letters using the hashtag #BGLovesNY.

“No matter where you are in the world, New York City is a destination defined by the beauty of human ingenuity and creativity,” said Darcy Penick, Bergdorf’s president. With its letter campaign, BG is “giving back and championing New York City’s future, while celebrating its unyielding magical qualities.”

Asked if the letter campaign can be advanced for the future, Strauss responded, “New York is always going to play a part in our storytelling.”