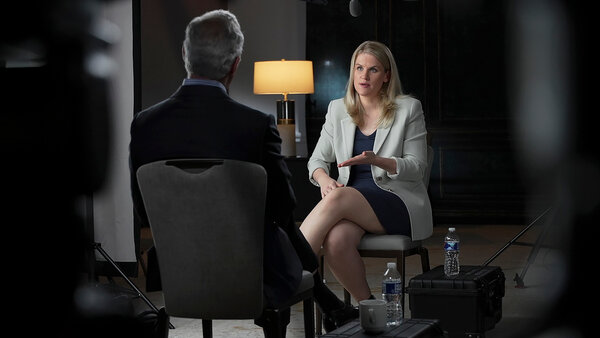 The hits keep coming for Facebook. Last night, in an interview on “60 Minutes,” a former Facebook product manager described how she had leaked internal documents to The Wall Street Journal. The newspaper had published a series of eye-opening articles dubbed “The Facebook Files,” detailing what the social media giant knew about the harms its platform was causing.

The previously anonymous whistle-blower, Frances Haugen, is scheduled to testify in Congress tomorrow. She has also filed a complaint with the S.E.C. accusing Facebook of misleading investors with public disclosures that did not match its internal actions. Facebook, which has been in damage-control mode because of the leaks, told The Times that “to suggest we encourage bad content and do nothing is just not true.”

Who is the whistle-blower? Haugen is a data scientist who was hired by Facebook in 2019 to work on democracy and misinformation issues. She left in May after finding the company’s efforts lacking. Haugen said that Facebook turned off safeguards after the 2020 election that would have stopped misinformation that, she believed, fueled the storming of the U.S. Capitol on Jan. 6.

“I’ve seen a bunch of social networks and it was substantially worse at Facebook than what I had seen before,” Haugen said. “Facebook, over and over again, has shown it chooses profit over safety.”

How big a deal is the S.E.C. complaint? We don’t know whether Haugen’s S.E.C. complaint is based on financial filings or other public statements. Making a case based on nonfinancial statements can be tough. The wording in Facebook’s public disclosures about misinformation is broad.

The biggest problem for Facebook may be what has been revealed about the strength of its social network. The Times’s Kevin Roose writes that Facebook may be weaker than many think. The internal documents show that usage of some Facebook’s products is shrinking, while others are making users angrier. The company remains powerful but could be in decline. “Facebook’s next few years could be uglier than its last few,” Kevin writes, “especially if it decides to scale back its internal research and integrity efforts in the wake of the leaks.”

A huge leak exposes the offshore holdings of the world’s elite. International news organizations published a joint investigation into how the wealthy shield their money from taxes, based on almost 12 million financial records, which they called the “Pandora Papers.” The King of Jordan is among those mentioned in the reports.

Airlines introduce more coronavirus vaccine mandates. American, Alaska Air and JetBlue will require employees to get inoculated, following United’s lead. The airlines said that as government contractors, new rules require them to mandate vaccines by Dec. 8, although Delta said it was still evaluating its options.

Investors eye the fourth quarter warily. Last month, the S&P 500 suffered its largest monthly drop since the start of the pandemic, and the current next quarter is set to be bumpy, investors told The Times. Slowing growth, rising inflation, supply chain disruptions, political gridlock, the end of Fed stimulus and the persistent threat of Covid are all hanging over the market.

Tesla reports record quarterly deliveries. Despite the global chip shortage that has hit its rivals, Tesla delivered almost a quarter of a million electric vehicles worldwide in the third quarter, more than 70 percent higher than the previous year.

Engine No. 1, the activist investment firm that made its name by successfully taking on Exxon, will formally announce today that it has taken a stake in General Motors. Unlike its bruising battle with Exxon, the purchase is pitched as a show of support for the automaker’s transition to electric vehicles.

G.M. should be worth a lot more than it is now, the activist said. In a white paper released ahead of the automaker’s investor day on Wednesday, Engine argued that G.M. merits a higher valuation because of its scale and commitment to electric cars. G.M.’s shares are up about 31 percent this year, giving the company a market cap of $77 billion, or about a tenth the value of Tesla.

The investment firm first took a stake in the first quarter. It declined to disclose the size of its position, but said it is among the three largest in its private fund. (The firm’s positions have been relatively small so far.) Engine has met informally with the carmaker’s management, including C.E.O. Mary Barra, and has no plans to launch a proxy fight as it did at Exxon, Engine’s founder, Chris James, told DealBook.

It’s betting that an incumbent can outmaneuver newer rivals. In January, G.M. became the first traditional auto company to commit to selling only zero-emission vehicles by 2035. The carmaker plans to spend $35 billion on electric and autonomous vehicles and build four battery plants in the U.S. by 2025. But funding these initiatives has become trickier lately, as G.M.’s finances are dented by the semiconductor shortage. Electric vehicles also remain a small sliver of total U.S. auto sales, held back in part by a lack of charging stations. Despite these challenges, James said, the industry’s shift to electric vehicles is “inevitable.”

What they saw in Ozy Media

Less than a week after Ben Smith of The Times exposed a series of misleading statements and actions at Ozy, the digital media company announced it would shut down. What drew investors in to begin with?

In his latest column, Ben writes that the most interesting part of stories like the rise and fall of Ozy “is the mirror they hold up to the ones who believed.” For the investors who bought into its vision, Ben writes, the key takeaways are “how little analysis some investors perform and how much they rely on gut instinct and herd-like validation from their peers.”

“We tried to do what we could to hopefully live out a set of values about inclusivity and growth and innovation and change and possibility,” Carlos Watson, Ozy’s C.E.O., told Ben. “Those were real things.”

What others are saying:

“It was a story and not a business — but the story is what people wanted to buy.”

— Todd Brown of Urban Edge Networks, who led a campaign to persuade marketers to spend more money with Black-owned media companies. He was “shocked” when much of the money went to Ozy, which was founded by Watson, who is Black.

“My perception is that some advertisers and venture capitalists are much more comfortable attaching themselves to media with lower stakes that is attached to lofty ideas.”

— Lauren Williams, the former editor in chief of Vox who left that site to start a news site focused on Black audiences, Capital B.

Supreme Court: In-person oral arguments resume today after being suspended in March 2020 because of the pandemic. The term that promises to be politically charged, as six conservative justices and three liberals weigh issues that include abortion and vaccines. Justice Brett Kavanaugh, who tested positive for Covid last week, will dial in.

Jobs report: On Friday, the U.S. government releases its report on how many people were hired in September. The numbers for August were disappointing, but economists expect that hiring rebounded last month.

OPEC meeting: The cartel and its allies are expected to review oil output policy later today. The group could revise its agreement to increase production after Brent crude futures hit their highest level in almost three years.

From the TimesMachine: The first artificial satellite, Sputnik, was launched into space by the Soviet Union on this day in 1957. The Times said the U.S.S.R. “did not pass up the opportunity to use the launching for propaganda purposes” when it claimed it had turned the “boldest dreams of mankind into reality.”

The limits of decentralization

The cryptocurrency industry has been up in arms over a tax-reporting provision in the infrastructure bill. The proposed bill defines a “broker” in a way that would apply to everyone involved in a crypto transaction, including software developers of decentralized finance platforms and Bitcoin miners. It is damaging and impractical to require these players to report tax data on users that they do not know, crypto advocates have argued.

A costly bug recently undermined industry claims. Last week, a flaw in the code of the automated money market protocol Compound, which has $15 billion in assets, led to tens of millions of dollars worth of its crypto token erroneously going to some users. Compound’s chief, Robert Leshner, tweeted that anyone who didn’t voluntarily return the money would be reported to the I.R.S., seemingly undermining claims that identifying users of decentralized crypto platforms like Compound is impossible.

Leshner said that his tweet was “misconstrued.” He said that anyone could identify the public Ethereum addresses that interact with the Compound protocol, and whether they engaged with popular exchanges like Coinbase that collect information about users. Leshner told DealBook he “intended to suggest” that given the likelihood of interaction with a centralized exchange, “anyone could point to which addresses received an unexpected windfall.”

The episode exposed the vulnerabilities of automated crypto financial systems, just as regulators, alarmed by the alternative ecosystems being built on the blockchain, plan to issue a series of reports this fall outlining new rules for the future of finance.

Clayton, Dubilier & Rice won the weekend auction for the British supermarket chain Morrisons, with a bid of around $13.5 billion. (FT)

Volvo Cars announced a plan for an I.P.O. in Stockholm that could value the automaker at more than $20 billion. (Reuters)

Rivian, an electric vehicle start-up backed by Amazon and Ford, revealed large losses in a filing ahead of its planned I.P.O. (NYT)

“Jan. 6 Was Worse Than We Knew” (Times Opinion)

Monzo, a British fintech start-up, has withdrawn its U.S. banking license application after regulators warned it was unlikely to be approved. (FT)

The Simpsons made an appearance as models at Balenciaga’s runway show during Paris Fashion Week. (Vogue)