LONDON — Scotch & Soda is preparing for a post-pandemic return to physical retail with a host of worldwide openings planned, and a new brand logo.

The Amsterdam-based contemporary brand — which offers men’s, women’s and children’s wear as well as a premium denim line — is set to open 15 stores and 12 shops-in-shop over the next six months, WWD has learned.

The rollout will begin this week, and the openings will add to the brand’s existing retail network of 225 stores and 161 shops-in-shop. The brand will also add new showrooms and offices in Shanghai and Milan this spring.

The stores will open in cities in Europe, North America, the Middle East and Asia Pacific, and feature the brand’s new “free spirit” concept, which features an updated logo and branding.

Key openings in Europe include new, larger locations in the Netherlands, including a store in Utrecht opening on Tuesday, followed by an opening in Westfield’s Mall of the Netherlands in Leidschendam on Thursday.

The brand’s largest flagship worldwide will open in the city of ‘s-Hertogenbosch, colloquially known as Den Bosch, on March 25. 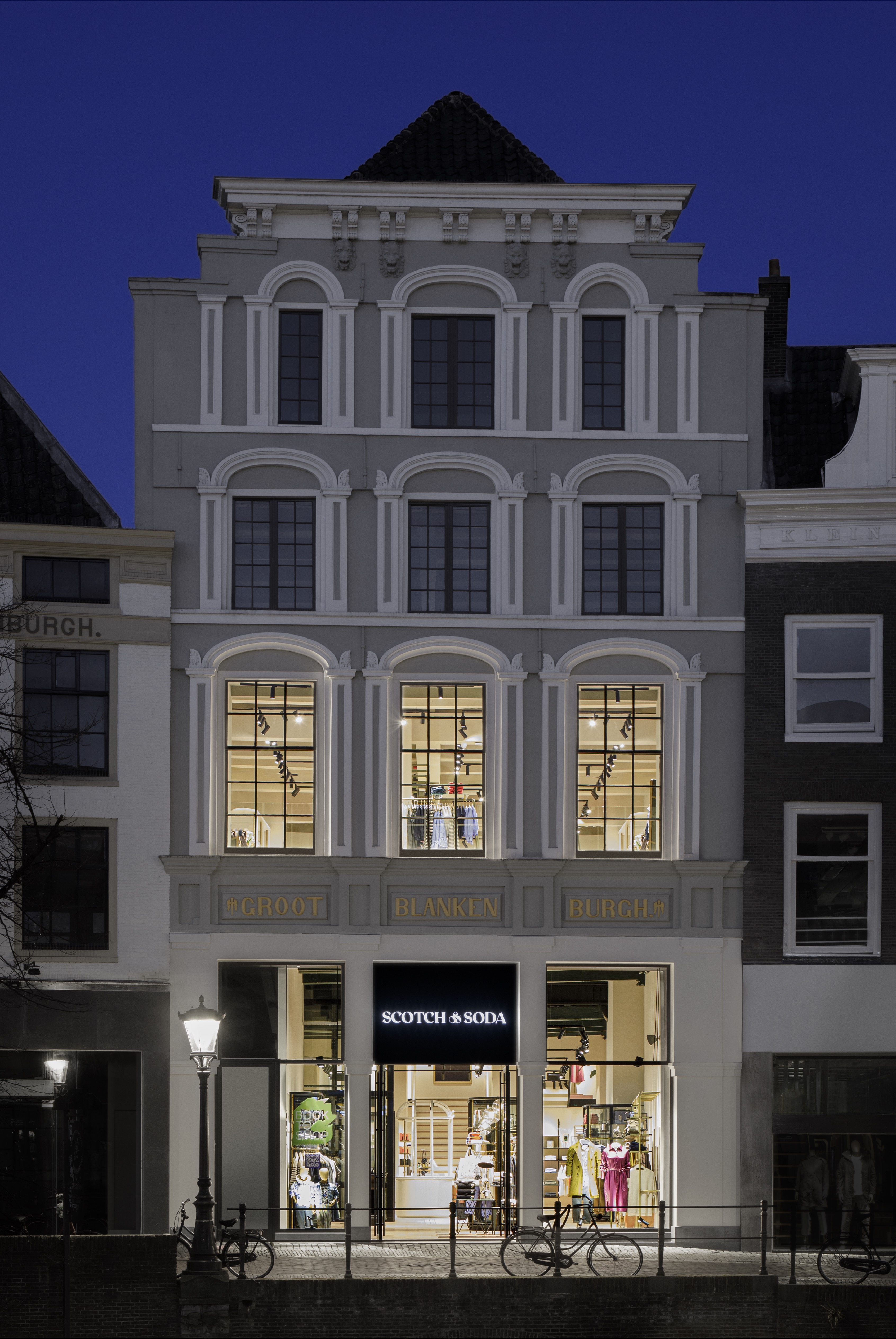 Stores and shops-in-shop will also bow in Germany, France, Ukraine, Poland, Switzerland and Sweden. In the U.S., a unit will open in Boston in September, following the recent arrival of two stores in California, adding to the existing 43-store portfolio in North America.

The brand said it is looking to secure three additional locations in Palo Alto, Calif.; Charlotte, N.C., and the King of Prussia Mall, Pa., over the next few weeks.

In the Middle East, Scotch & Soda will debut in Israel in April, followed by Qatar, United Arab Emirates and Kuwait. In Asia Pacific, a new franchise will open in April in Mumbai, India, as well as in October in Perth, Australia.

The brand said each store is unique, and blends the original architecture and characteristics of the building with the Scotch & Soda signature design.

Going forward, all facades and interiors will carry the new brand identity, which incorporates muted tones of white, charcoal and tan, as well as pop accents of yellow, rose pink and burgundy. 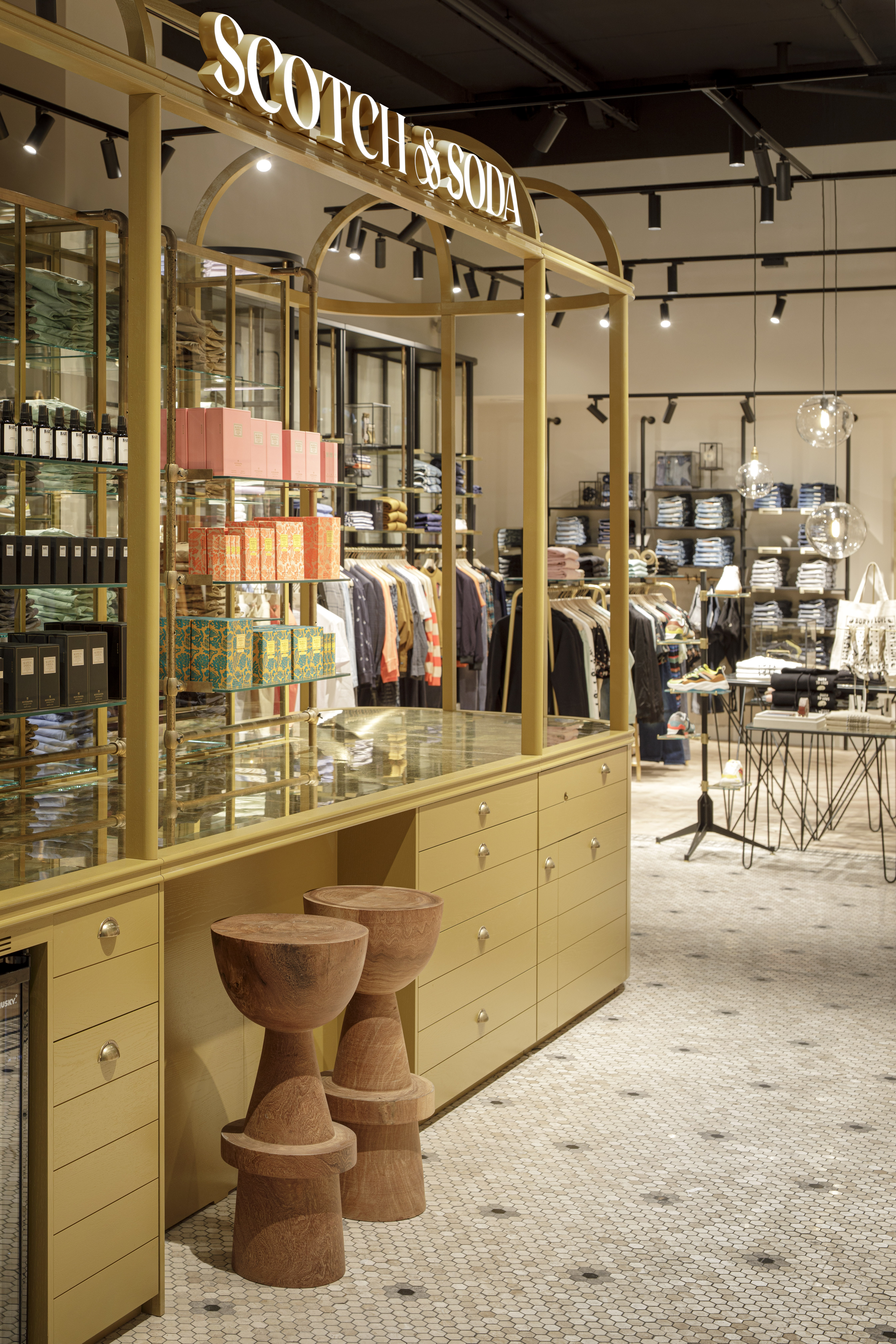 The bar inside the Westfield Mall of the Netherlands store.

All new stores have been fitted with LED lights, FSC wood herringbone flooring, hangers made from recycled materials and soft furnishings, such as sustainable rugs.

The company said sustainability is a priority, and it is increasing its use of certified fibers that are organic, recycled, regenerative or renewable from a biological or technical source, such as organic cotton, recycled polyester or Econyl.

The new monogram blends the brand’s ampersand with its initials, and nods to the craftsmanship of the collections with the image of a thread attached to the eye of a needle.

Designed in collaboration with A Studio in New York, the new identity will be revealed digitally on Tuesday before appearing on the collections’ labels in November starting with the spring 2022 collection.

Scotch & Soda was founded in the Netherlands in 1985, and is owned by an affiliate of Sun Capital Partners Inc.

Over the years, it evolved from a wholesale-only, Netherlands-focused company into an international, omnichannel one. The products are sold in 70 countries and, according to the company, annual sales are about 291 million euros.