LONDON (Reuters) – Oil and equity markets staged solid rebounds on Tuesday after the previous day’s pummelling, with signs of coordinated action by the world’s biggest economies to cushion the economic impact of coronavirus helping pull investors out of panic mode.

Brent roared back as much as 10% on hopes a supply cut deal could be rescued while most benchmark government bond yields were off record lows as hopes for stimulus in the face of the epidemic boosted risk sentiment.

Wall Street main markets wasted little time in recouping at least 2% of the 7% they had slumped on Monday, one of their worst days on record. [.N]

The oil and gas and mining sectors were leading the charge for Europe as oil recovered some of Monday’s 25% fall following what had appeared to be the complete breakdown of a crucial global oil pact between OPEC and Russia. [O/R]

Yields on benchmark U.S. 10-year Treasury debt more than doubled to 0.70% and those on German Bunds jumped around 20 basis points at one point as investors pared some safe-haven holdings, though they were beginning to ease again. [GVD/EUR]

Supporting the mood was a pledge from U.S. President Donald Trump on Monday to take “major” steps to protect the economy and float the idea of a payroll tax cut with congressional Republicans.

Japan said it would spend another 430.8 billion yen ($4.1 billion) to ease the effects of the coronavirus outbreak and Italy’s deputy economy minister announced that mortgage payments would be suspended as the country deals with the second highest number of cases outside China.

Some of the biggest global investment banks, including JP Morgan, Citi and Barclays, now expect the Federal Reserve to cut U.S. interest rates to zero in the coming months as part of a mass global move to provide some ballast and liquidity to the financial system.

“As of today, we believe that markets have gone from being overly complacent to overly pessimistic,” the chief investment officers of Europe’s largest asset manager Amundi wrote in a note to clients.

“Our central case, instead, is one of a temporary setback, although more prolonged compared to what we were expecting a month ago, followed by a recovery,” they added.

Oil suffered its sharpest drop since the 1991 Gulf war and global stocks plunged on Monday after Saudi Arabia launched a crude price war with Russia, further rattling investors already anxious about the spread of coronavirus.

Tuesday’s market fight back had begun to gain traction in Asia. Japan’s Nikkei had ended the day up 0.85%, after earlier touching its lowest level since April 2017. [.T]

Australia’s index closed up 3.1% as some went hunting for bargains in beaten down stocks.

The news continued to be negative elsewhere, however, with Italy ordering its citizens not to move around other than for work and emergencies and banning all public gatherings.

“Although uncertainty is very high, we now expect similar restrictions will be put in place across Europe in the coming weeks,” warned economists at JPMorgan.

“We are now expecting a rolling H1 2020 global growth contraction and a powerful global disinflationary wave to take hold,” they added. “We expect the Fed to cut to zero at or before its March 18 meeting.”

The oil rally had the most horsepower. Around 10% of its massive losses from Monday were clawed back, offering hope that markets had found a floor despite still-fragile sentiment.

Russian oil minister Alexander Novak said he did not rule out joint measures with OPEC to stabilise the market.

He adding that the next OPEC+ meeting was planned for May-June, though Saudi Arabia’s energy minister told Reuters there would be no need for that if there was no agreement on how to deal with the impact of the coronavirus on the market.

“I fail to see the wisdom for holding meetings in May-June that would only demonstrate our failure in attending to what we should have done in a crisis like this and taking the necessary measures,” Prince Abdulaziz bin Salman said.

Benchmark Brent crude futures bounced by $2.80 to just $37 a barrel though that was still roughly half the level it started the year at. [O/R]

Gold prices fell 1%, retreating from the last session’s jump above the key $1,700 level, as safe-haven demand waned a little amid speculation about global stimulus measures. [GOL/]

“In times of turmoil, nothing is more important in restoring confidence than the government appearing calm and in control of the situation, (however) tenuous that control may be,” Jeffrey Halley, senior market analyst at broker OANDA, said in a note.

Such has been the conflagration of market wealth that analysts assumed policymakers would have to react aggressively to prevent an economic crisis.

The U.S. Fed on Monday sharply stepped up the size of its fund injections into markets to head off stress.

Having delivered an emergency rate cut only last week, investors are fully pricing an easing of at least 75 basis points at the next Fed meeting on March 18, while a cut to near zero was now seen as likely by April. <0#FF:>

Britain’s finance minister is due to deliver his annual budget on Wednesday and there is much talk of coordinated stimulus with the Bank of England.

The European Central Bank meets on Thursday and will be under intense pressure to act, even though euro zone rates are already deeply negative.

“Italy’s decision to quarantine the whole country will affect 15% of Europe’s GDP, putting the ECB at the forefront of efforts to cushion the escalating economic deterioration,” said Brian Martin, a senior international economist at ANZ.

Bonds had charged ahead of the central banks to essentially price in a global recession of unknown length.

Yields on 10-year U.S. Treasuries dipped to as little as 0.318% on Monday — a level unthinkable just a week ago — but rose back to be last at 0.622% on Tuesday amid the stimulus chatter.

That in turn helped the dollar recoup some of its recent hefty losses to reach 104.20 yen, edging away from Monday’s three-year trough around 101.17. 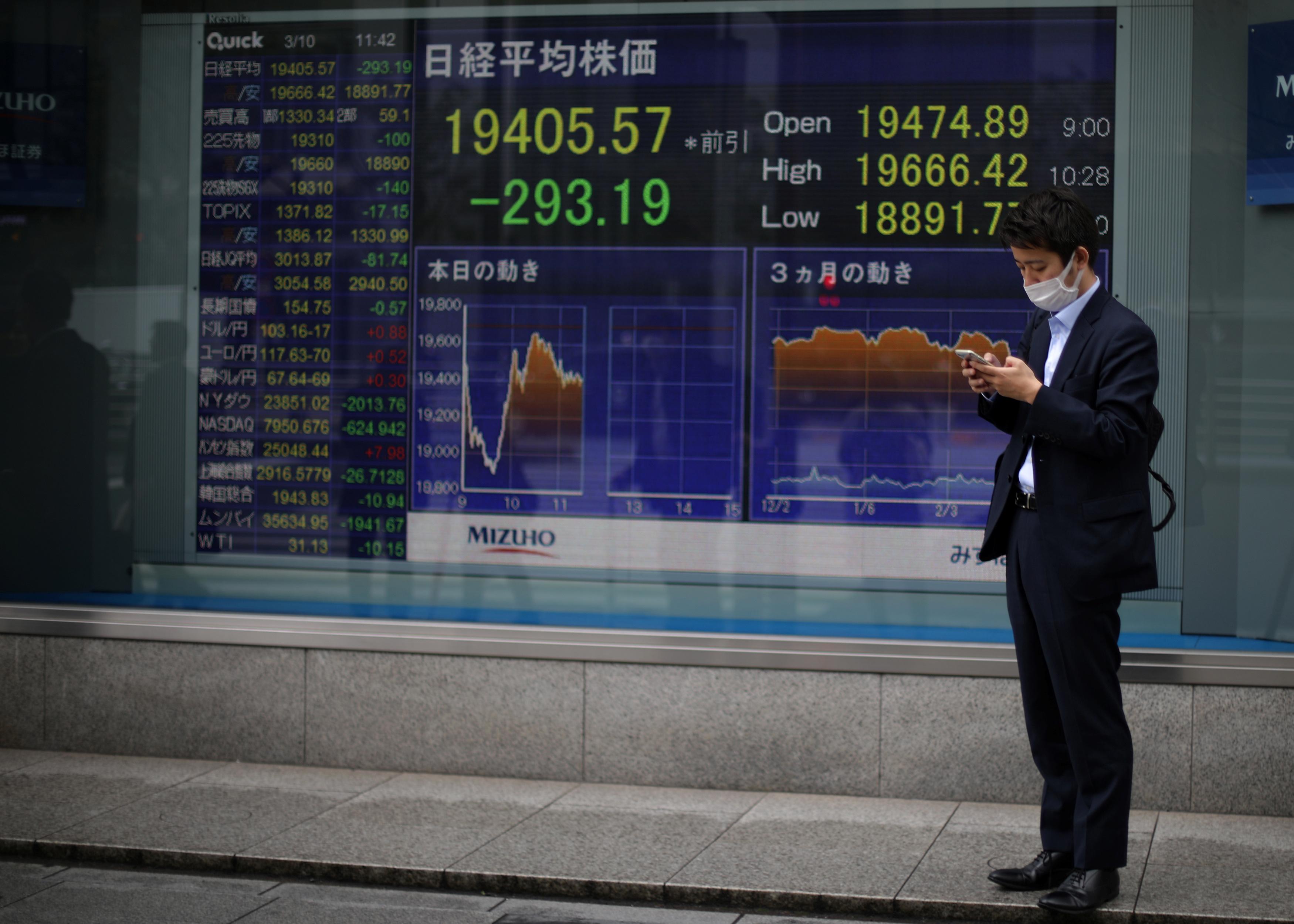