In the first quarter ended March 31, Aeffe’s earnings before interest, taxes, depreciation and amortization increased 64 percent to 14.1 million euros, compared to 8.6 million euros in the same period a year earlier.

“A double-digit increase in sales, as well as the cost rationalization measures that we implemented in the second quarter of last year, as a response to the coronavirus outbreak, enabled the company to substantially increase its gross margins,” said Aeffe managing director and chief financial officer Marcello Tassinari. “Another important KPI is that in such a particular moment, our group is keeping its leadership by maintaining its level of debt constant.”

They Are Wearing: Springtime Fashion in and New York, Los Angeles, and Austin

According to Tassinari, sales would have increased over 20 percent without the lockdowns that forced the company to shut many of its stores.

In particular, in the first quarter of the year, Aeffe’s retail business, which counts 57 stores and accounts for 15 percent of the group’s sales, declined 32.3 percent. Its losses were compensated by the positive performance of Aeffe’s wholesale channel, which posted a 16.9 percent increase.

“Our online business performed extremely well in the first quarter, especially in the United States, where the online showed positive growth rates,” said Tassinari, highlighting that the U.S. market will be key for the further development of the company. Showcasing Aeffe’s focus on the U.S., Tassinari highlighted that, as reported, Moschino will show its women’s spring 2022 collection on Sept. 9 during New York Fashion Week and will also participate to The Met Gala.

At current exchange, sales in America rose 16.7 percent, while Aeffe’s revenues in Asia were up 14.7 percent thanks to strong performances in Greater China and the Middle East, markets that grew 33 and 48 percent respectively, at constant exchange rates.

Sales in Europe increased 8.4 percent, mainly thanks to the positive performance of the wholesale channel in Germany and Eastern Europe, while sales decreased 2.6 percent in Italy, especially due to the decline in the company’s retail business due to pandemic-required lockdowns and the lack of international tourists.

According to Tassinari, the fashion company, which will contribute to the vaccination campaign in Italy by opening a dedicated center at its headquarters in the Emilia-Romagna region, expects to close 2021 up about 20 percent compared to the previous year.

“We expect a recovery of the markets for all our brands,” said Tassinari, noting that his forecasts are based on the positive results of the fall 2021 sales campaigns, where Aeffe posted a 12 percent increase compared to the same season last year.

Burberry Sales Bounce Back in Q4, with Post-COVID Recovery Underway 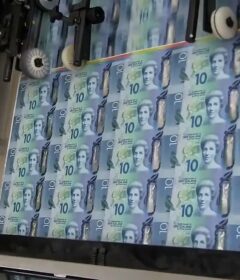