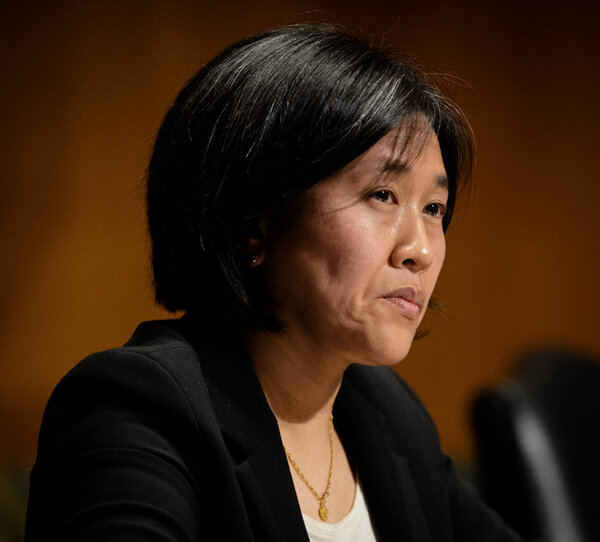 Katherine Tai, the United States trade representative, made a case on Thursday for using trade policies to fight climate change, devoting her first speech in her new position to addressing one of President Biden’s top priorities.

“For too long, the traditional trade community has resisted the view that trade policy is a legitimate tool in helping to solve the climate crisis,” Ms. Tai said, according to prepared remarks for a virtual event held by the Center for American Progress.

“As we have so often seen with labor issues, there is a certain refuge in arguing that this is all a question of domestic policy and that we need not tackle the daunting task of building international consensus around new rules,” she said. “But that dated line of thinking only perpetuates the chasm that exists between the lived experiences — and expectations — of real people on the one hand and trade experts on the other.”

In her remarks, Ms. Tai spoke of the need to address illegal logging and overfishing. And she laid out an argument for why it was critical to address environmental issues as part of trade agreements.

“For too long, we believed that trade liberalization would lead to a gradual improvement in environmental protection as countries grew wealthier from increased trade flows,” she said. “But the reality is that the system itself creates an incentive to compete by maintaining lower standards. Or worse yet, by lowering those standards even further.”

Ms. Tai’s speech comes a week before Mr. Biden is scheduled to host world leaders at a virtual climate summit. Her speech is another example of how the Biden administration is seeking to address climate change across the vast machinery of the federal government — not just in agencies typically associated with environmental stewardship.

Mr. Biden signed an executive order in January declaring that climate would be “an essential element of United States foreign policy and national security,” and his spending proposal for the 2022 fiscal year calls for billions of dollars in new climate-related spending across the federal government.