Home » Business » What Are NFTs, Why Should Fashion Care and Will This Bubble Burst?

What Are NFTs, Why Should Fashion Care and Will This Bubble Burst?

NFTs, the hot emerging technology with the clunky name, have galvanized the fashion sector and everyone else who sees opportunity in a crypto craze that has driven millions of dollars in recent sales.

The NFT phenomenon is somewhat self-selecting, in that it can take a little tech-savvy to even understand what it is. But at a fundamental level, NFT stands for non-fungible token, a piece of data that’s not fungible, or replaceable, that can act as a digital certificate of authenticity and ownership for a particular asset.

Because the token lives on the blockchain, a decentralized digital ledger that logs transactions, it can’t be copied or hacked. And that makes NFTs very valuable.

“Where you’re now taking a token that represents a collectible or a high-dollar item in fashion, what you’re doing is, you’re now taking something that’s relatively illiquid, like a shoe, and you’re creating this token that can be bought, can be sold, can be traded, can be put on your balance sheet, can be looked at in all sorts of different ways, because it now has value in this digital ledger, this distributed ledger,” James Wester, research director of worldwide blockchain strategies for IDC, explained to WWD.

“Once that token is put into a [blockchain] wallet, you can’t go in there and change it,” he said. “That’s transparency. You’ve got immutability.”

The 2021 Oscars: See All the Red Carpet Fashion Looks

One of the most intriguing aspects of the tech is that it can verify the authenticity of an original digital asset, like a music file, video or image, regardless of any other copies that may spring up. That’s key, as anyone can rip a song, GIF or a 360-degree image of a high-fashion item. Unlike physical goods, copied data files are exact replicas of the original, which makes spotting copycats difficult.

But if a luxury brand puts out a virtual-only NFT collection, buyers would be able to prove they own the real thing and not a digital knock-off.

The proposition has fed into an explosion of interest this year, particularly in art and fashion circles, which have historically been dogged by counterfeiters. Now that NFTs have landed on their radar, it opens up a bold new world for premium digital works. 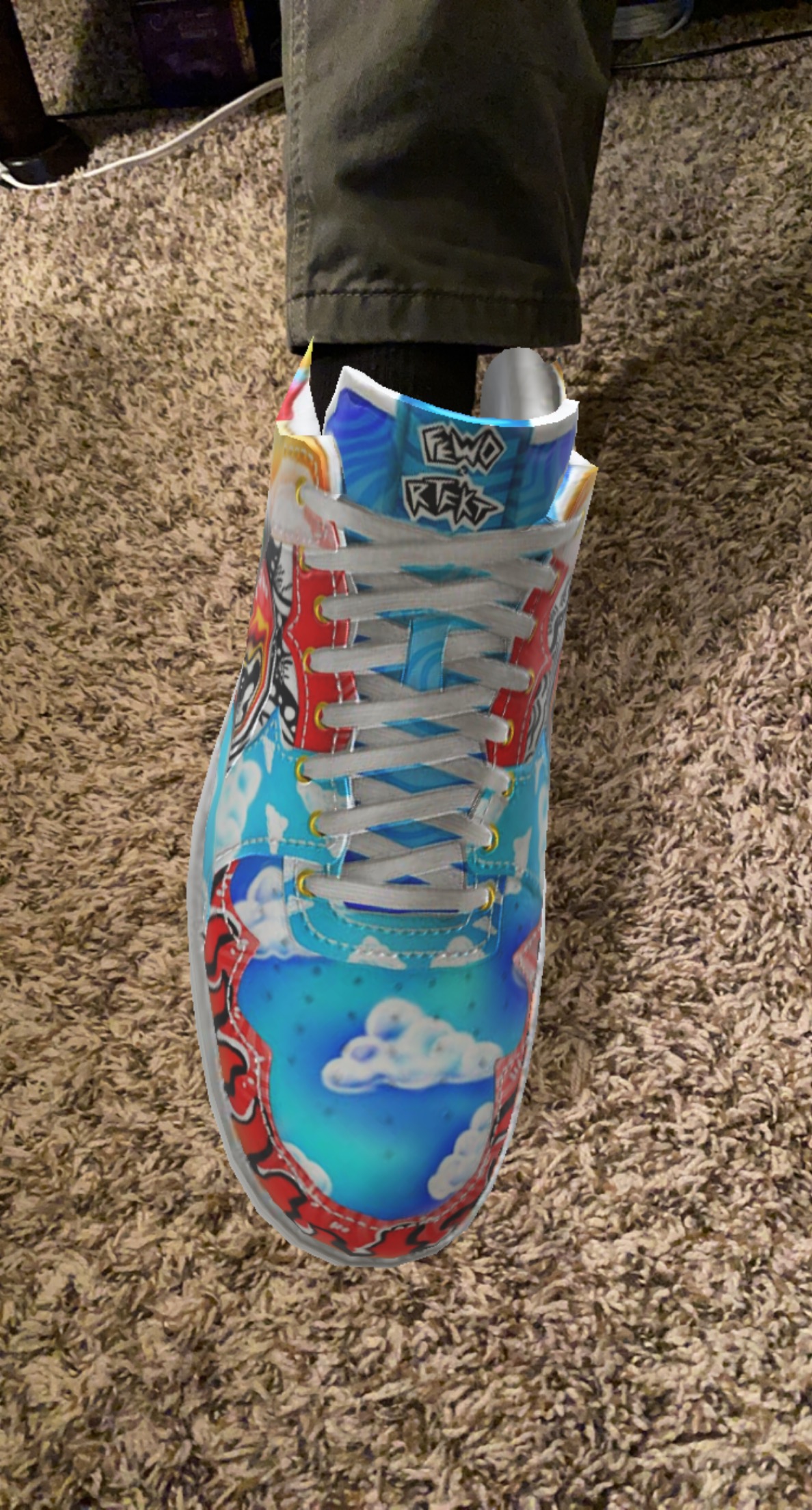 Canadian artist and musician Grimes, who’s perhaps known best as Elon Musk’s girlfriend, sold 10 pieces of NFT digital art, including images and music, for $5.8 million in less than 20 minutes. Another artist, Beeple, pulled in $6.6 million for a video NFT, then went on to shock the art world with a Christie’s auction that sold his NFT piece, “Everydays: The First 5000 Days,” a digital collage made up of 5,000 images, for $69 million.

Now there’s a dedicated NFT art gallery in New York City, the first of its kind in the world, and a blue-chip, blockchain-based art portfolio from Artcels that offers shares-based ownership using NFTs.

Meanwhile, in fashion, the sector’s collective jaw fell open over a virtual NFT sneaker drop by crypto brand RTFKT Studios and teen artist Fewocious. The partners, who promoted the digital footwear collection through augmented-reality lenses in Snapchat, wound up nabbing $3.1 million in only seven minutes.

Had the enthusiasm stayed contained to bleeding-edge fashion tech start-ups, the trend might be easier to overlook. But Gucci — which has long been active on digital initiatives in gaming and augmented reality, and has even designed digital-only sneakers — is expected to debut fashion NFTs in the future. So is LVMH, which has been a major proponent of blockchain technology for luxury authentication.

The tech craze, having firmly captured the attention of art and fashion, has moved on to other domains, spurring NFTs for everything from a video of a LeBron James jump shot to animated image files of Taco Bell menu items and virtual Pizza Hut pizzas. Lacking the heady sales of other efforts, the fast-food projects clearly amounted to marketing ploys, not revenue streams. But what it does show is that everything is now on the table. Even words.

Twitter head Jack Dorsey sold his very first tweet, or rather a data file of his tweet, as an NFT for more than $2.9 million, triggering a firestorm of major media headlines and adding to the NFT frenzy.

The hype cycle appears to have reached maximum froth. But this begs the question: just who is buying these goods?

“For the most part, they are people who are really interested in the cutting-edge of having blockchain technology and technologists,” Clay Collins, cofounder and chief executive officer of crypto-asset data firm Nomics, told WWD. He thinks of them as crypto early adopters and “people that have created a great deal of wealth through their blockchain investing. You know, bitcoin is the best-performing asset of the last 10 years, so if you bought bitcoin in 2013, it was a couple of hundred bucks. Now it’s worth $54,000 per bitcoin.”

Collins likens the trend to the incredible wealth creation that came out of the Bay Area’s high-value tech IPOs, or initial public offerings, which drove the local real estate market sky-high. But beyond high-risk investors, he also sees how a hot new, esoteric technology appeals to a digitally savvy Gen Z crowd who wouldn’t balk at blowing money on virtual shoes or clothes they can never wear.

It’s not a foreign concept for some fans, who break their wallets for the bragging rights of owning physical sneakers that never leave the trophy case, but live in photos and videos on social media.

“I start thinking about all the people I know who are sneaker collectors, and they’ve got boxes and boxes of these collectible shoes, and nobody’s ever gonna want to wear them,” said IDC’s Wester. “You don’t wear shoes, you collect them. So why do I need to actually have a closet in my house to store them?”

Premium apparel companies could ask themselves the same sorts of questions, since digital goods require no physical production, supply chain logistics or warehousing — and apparently they are. Behind closed doors, several fashion brands are reportedly racing to evaluate their own potential in the space, as either a way to add revenue or a public relations play to build cred with younger consumers.

Even Mike “Beeple” Winkelmann, the artist whose famous, multimillion-dollar NFT auction at Christie’s made him a household name in the art world, said it was “absolutely” in a bubble. 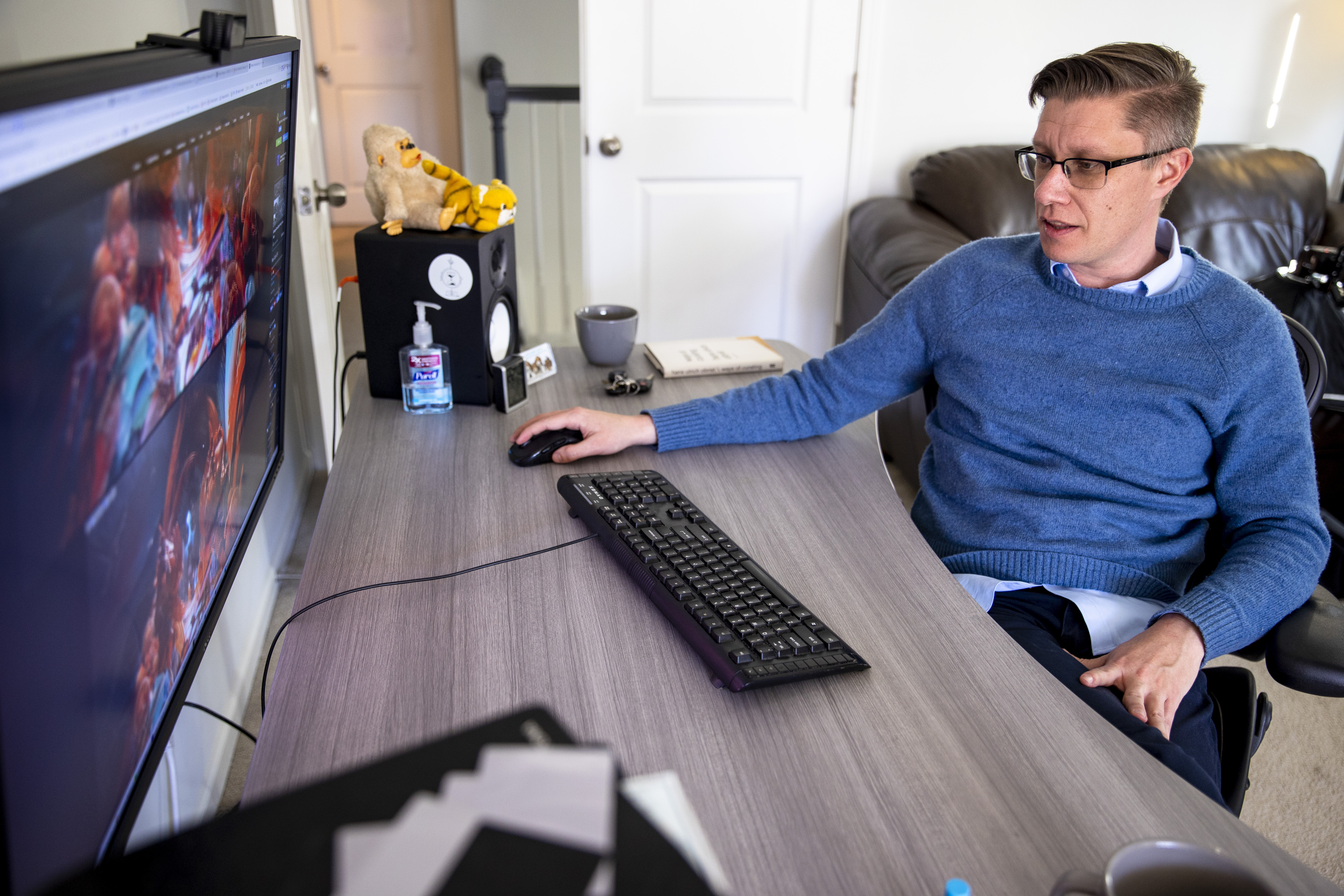 “I think it’s a bubble,” he told CoinDesk TV right after the auction. “If it’s not a bubble now, I do believe it probably will be a bubble at some point, because there’s just so many people rushing into this space.”

He had a point. NonFungible.com, which tracks the NFT ecosystem, noted that market highs for NFTs surged 2,100 percent to $2 billion in sales during the first quarter of this year, then plummeted. NFT prices plunged nearly 70 percent from their peak in mid-February, going from an average price of $4,000 to less than $1,500 in early April.

By mid-April, the site chalked up the fluctuations to “stabilization phenomenon,” and not a sign of a crash, saying “this shift in the curve was predictable, and is even reassuring as to any potential ‘Market Correction’ that may arise.” Although the volume of assets traded were down, it called the drop “an interesting lag, which can be explained by the growing interest of new buyers following record sales.”

Since then, sales have dropped again, which may be a potential sign of uncertainty over NFTs’ longevity or just an extension of blockchain’s notorious volatility.

A major obstacle that has kept them from becoming even more mainstream is that purchasing NFTs isn’t easy. Consumers typically have to buy cryptocurrencies first and then set up a dedicated crypto wallet.

This is a point of friction that some platforms are eager to banish to make it simpler.

One of the latest will come from Vidy, a blockchain-powered digital ad firm in Singapore. The company is partnering with Media Publishares, Vogue’s Singapore-based publisher, on a new NFT platform coming in the third quarter of this year. The effort will spotlight arts and culture with a 360-degree virtual environment showcasing fashion, art, music and design and feature social interactions, as well as transactions, including the minting, trading and auctioning of NFTs.

“For this new NFT platform, Vidy will lead the technology and blockchain development given our unique experience in dealing with traditional businesses and crypto,” said Vidy cofounder Matthew Lim. “We are confident we will create the finest platform that will boost the NFT world by allowing seamless participation from the traditional fashion, art and music communities.”

So far, a lot of the momentum drives digital NFT fashion. But the tokens can also bridge the digital-physical divide for things like real estate, diamonds and, of course, fashion.

“If you’re a brand that wants to put out a digital-only version of your designs for sale as a non-fungible token, it may get you some brand recognition, as well as potentially kickstarting a market of non-fungible tokens for your goods,” Wester added.

A brand could sell an NFT-verified garment as a one-of-a-kind piece for individual purchase, together with a verified digital 3D image of the same item — so the customer can share it online — or as separate purchases. The latter would essentially open up revenue multiple times for the same design without diluting its exclusivity and value.

Arianee, an early player in NFTs for authentication, describes itself as a “digital passport platform for valuables” that creates “digital twins” for real-world luxury products. Investors found this premise appealing enough to give $9.5 million in funding for the company’s seed round.

As the fashion industry works out the various ways NFTs can bring value to their businesses, buzzworthy upstarts are already planning their next moves.

In April, RTFKT, the crypto brand that made news with its massive NFT sneaker drop last month, launched a new collaboration with digital couture house The Fabricant, the first fashion company to release an NFT. Its Iridescence dress sold for $9,500 in March 2019. 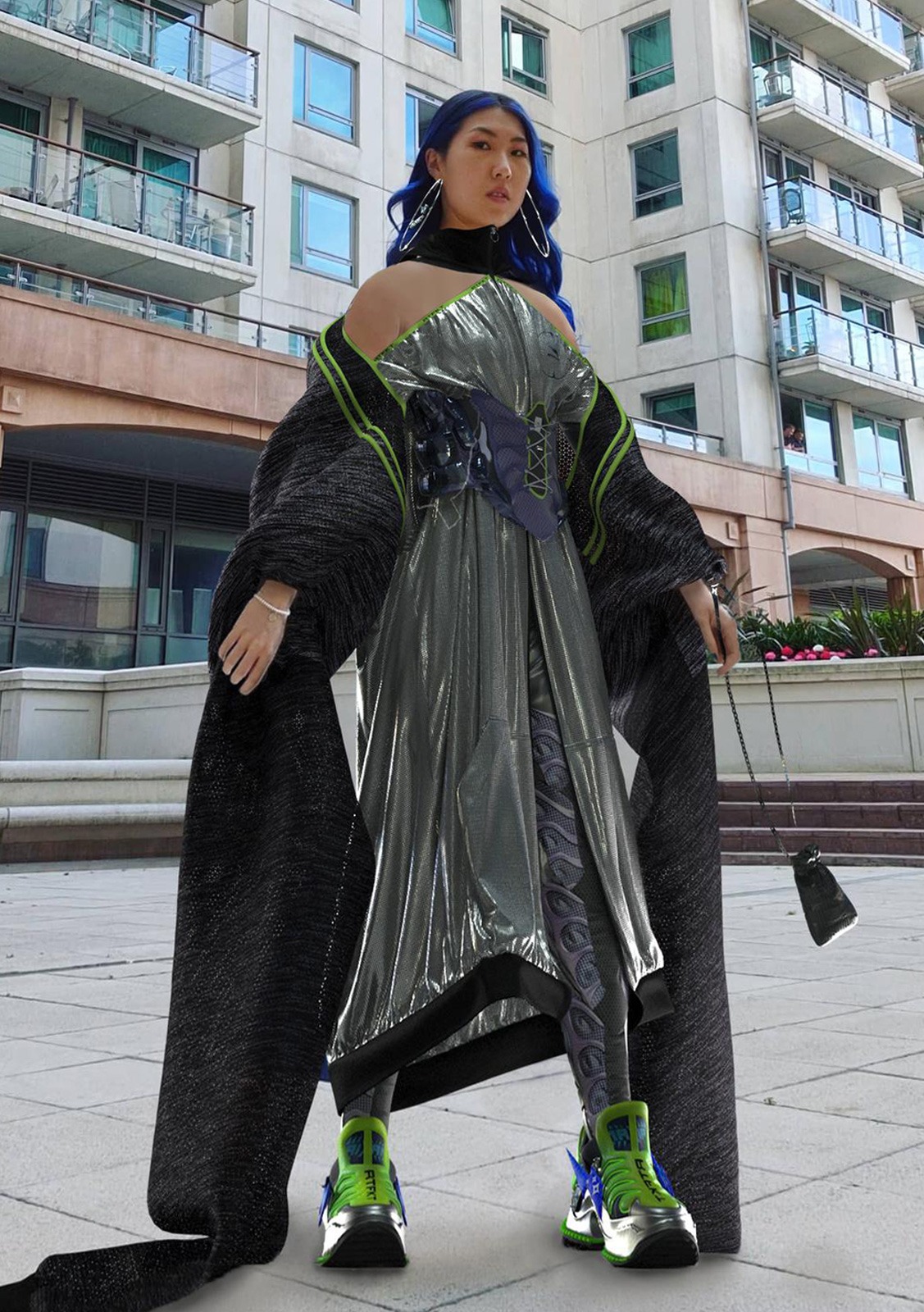 The current seven-piece, co-branded NFT digital collection, “RenaiXance,” went on sale for a limited time of 48 hours on invite-only marketspace The Dematerialised. The range included a variety of products, from earrings to a corset, as well as a secret sneaker drop on the second day.

Roughly a quarter bought more than one NFT, and the fastest-selling item was the corset. Only 10 were made available, priced at 181 euro ($217.59).

They sold out in 90 seconds.