Home » Politics » 40 Years After Reagan, a Bet Big Government Can Get Something Done

40 Years After Reagan, a Bet Big Government Can Get Something Done

President Biden feels a burning sense of competition, his aides say, to prove that democratic capitalism can work. 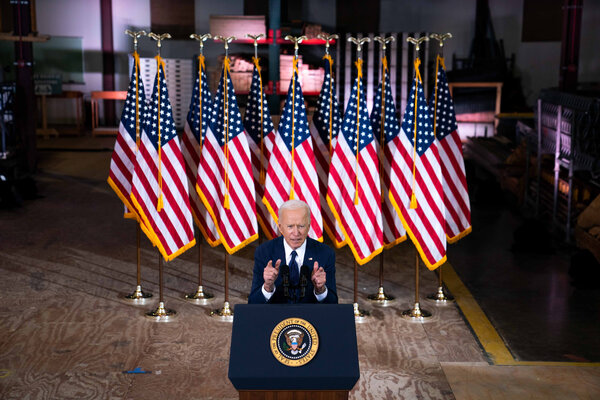 WASHINGTON — It has been 40 years since President Ronald Reagan declared in his first inaugural address that “government is not the solution to our problems, government is the problem.”

The infrastructure plan that President Biden described on Wednesday — $2 trillion in federal investment in poured concrete, electric car chargers, artificial intelligence and social engineering — is a bet that government can do colossal things that the private sector cannot.

In fact, when the long-awaited “infrastructure week” finally arrived in Washington, it turned out to be about a lot more than just new highways and the replacement of old lead pipes. Urged on by the left wing of his party, and reminded by historians that Presidents Franklin D. Roosevelt and Lyndon B. Johnson went big, Mr. Biden is using the framework of rebuilding crumbling highways and bridges to try to reshape the American economy by focusing more on long-range problems like climate change and inequality that have been caught up in the culture wars.

It will take years to know whether Mr. Biden’s initiative will have the lasting power of the New Deal or the Great Society, or whether it can “change the paradigm,” as he argued a few weeks ago.

Yet it is already clear it is based on the gamble that the country is ready to dispose with one of the main tenets of the Reagan revolution, and show that for some tasks the government can juice the economy more efficiently than market forces. Mr. Biden has also made a bet that the trauma of the coronavirus pandemic and the social and racial inequities it underscored have changed the political center of gravity for the nation.

Mr. Biden’s infrastructure plan fits with his declaration last week that “we’ve got to prove democracy works,” which was an acknowledgment that the Chinese government’s decision to underwrite “national champions” like the telecom giant Huawei and pour billions of dollars into key technologies like artificial intelligence is attracting imitators. Mr. Biden, his aides say, feels a burning sense of competition to prove that democratic capitalism can work.