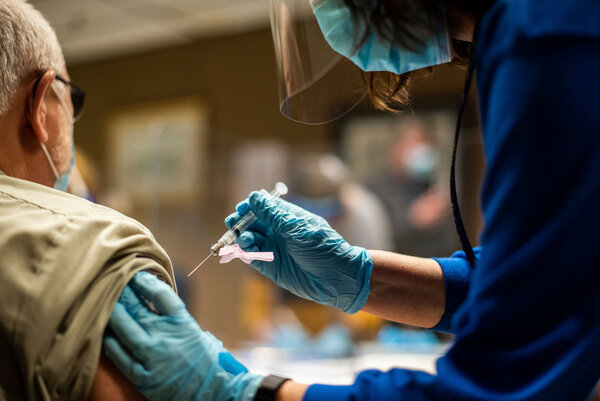 A bipartisan group of officials from the past five presidential administrations, as well as public health experts, are pressing private sector leaders to adopt a new set of recommendations to maximize coronavirus vaccination among their employees.

“You have a key role to play in our national quest to keep Americans safe, while respecting individual liberties,” an open letter from the group says, asking businesses to institute new workplace rules that would complement actions by federal and local governments to increase vaccinations against the surging Delta variant. Fully vaccinated people are protected against the worst outcomes of Covid-19, including those caused by the Delta variant.

The letter recommends that private companies, which employ 124 million Americans, require staff members to get vaccinated. Last year, the Equal Employment Opportunity Commission said employers could require immunization, though companies that do could still face lawsuits.

But it also recommends steps for companies to take if they choose not to require vaccination for their workforces.

Those include an “infection screening protocol,” which would require twice-a-week screenings through rapid tests. Anyone with proof of vaccination would be allowed to bypass that routine testing. The letter also recommends that companies provide incentives for employees to get vaccinated, including cash payments and paid leave.

“We recognize that any protocols create some amount of burden and cost for businesses and your employees,” the letter says. “Still, these will be relatively modest compared to the significant cost of ongoing disruption and uncertainty in business productivity and in people’s lives.”

The private sector initiative comes a week after President Biden sought to revive the country’s stalled vaccination push with a new set of requirements for federal workers and a plea to local governments to offer cash incentives.

Some of the nation's largest employers, like Disney and Tyson Foods, have mandated vaccines for their workers, while others like Google and Microsoft are requiring proof of vaccination to return to the office.

The letter is signed by Jerome Adams, the surgeon general under President Donald J. Trump; Richard Carmona, the surgeon general under President George W. Bush; Kathleen Sebelius, the health secretary in the Obama administration; Andy Slavitt, who served as a senior adviser to the Covid response coordinator in the Biden administration; and Rosalynn Carter, the former first lady, among others.

The new private sector push is being driven by the Covid Collaborative, a bipartisan group of political and scientific leaders working on vaccine education, which has worked closely with the White House on the issue of vaccine hesitancy. John Bridgeland, a co-founder of the Covid Collaborative, said the plan was to get 1,000 businesses or more to act.

Companies like Accenture, Baptist Health, Kaiser Permanente, Tyson Foods, Live Nation and the Ad Council have signed on to support what the group is calling #CovidSafeZones, with more big employers expected to join in the coming days.

“We recognize there is momentum for collective action, so no business feels disadvantaged and the impact of these steps is maximized,” the letter says. “We believe if you take visible action, many more will follow.”