EU ‘disapproves’ of travel ban as observers question efficacy of order which excludes some infection-hit countries.

Travel to the US from most of Europe will be suspended for 30 days beginning on Friday, President Donald Trump announced, citing a need to combat the spread of the coronavirus.

Trump’s move on Wednesday came amid rising global panic after the World Health Organization (WHO) warned that the spread and severity of the illness, now considered a pandemic, was due to “alarming” levels of inaction.

The ban applies to the 26-country Schengen Area. Among the countries excluded from the ban as they are not in that zone are infection-hit countries such as the United Kingdom, Ireland, Romania, Bulgaria, Croatia and Cyprus.

“The restriction applies to foreign nationals who have been in the Schengen Area, 26 countries in Europe with open borders agreements, in the last 14 days,” a White House statement said. “Those who are exempt from these restrictions, such as American citizens, will be directed to a limited number of airports where screening can take place.

“There is extensive travel back and forth between Europe that heightens the risk here in the United States.”

The response to Trump’s move in Europe ranged from anger to confusion.

“The European Union disapproves of the fact that the US decision to improve a travel ban was taken unilaterally and without consultation,” Ursula von der Leyen and Charles Michel, the respective presidents of the European Commission and European Council, said in a joint statement.

“The European Union is taking strong action to limit the spread of the virus.

“The coronavirus is a global crisis, not limited to any continent and it requires cooperation rather than unilateral action.”

Trump said on Thursday that he did not notify EU leaders because “it takes time” and he had to move quickly. He added that he excluded the United Kingdom because the country was doing a good job at controlling the spread of the coroanvirus.

Many had concerns over the economic impact of travel bans.

The news hit financial markets hard, with stocks diving and oil slumping, as investors were disappointed by the lack of broad measures to offset a likely fall in consumption.

British finance minister Rishi Sunak played down the prospect of the UK imposing similar travel restrictions, but acknowledged the US decision could have a knock-on effect on the British economy.

He told BBC Radio 4’s Today programme: “With regard to flight bans, we are always guided by the science as we make our decisions here, and the advice we are getting is that there isn’t the evidence that interventions like closing borders or travel bans are going to have a material effect on the spread of the infection.”

Meanwhile, many observers said the ban lacked clarity and could be interpreted as a political move.

“Non-Schengen and UK excepted: this is not about containment, this is about sending a political message. In a time where the EU is challenged to its core, the US is closing its borders and turning its back on allies,” tweeted Benjamin Haddad, director of the Future Europe Initiative at Atlantic Council.

Al Jazeera’s Laurence Lee, reporting from London, said: “The EU is absolutely furious about this, bewildered, and trying to work out what the ramifications are. They weren’t consulted apparently before Trump said this in the middle of the night, European time.

“They are trying to understand what it means. There are enormous concerns about trade between the EU and US.

“Trump seems to be making a cynical but political point out of this, by blaming Europe but not the UK. But it is a problem for the UK too, because European travellers who want to go to the US will think maybe I should stop off in London and travel from there.”

If that happened, Lee said, it would be extra strain on Britain’s National Health Service.

Trump said it was possible that he could extend or shorten the Europe travel ban depending how the situation plays out.

There have been more than 126,000 cases of the virus worldwide since its outbreak late last year in China, and over 68,000 people have recovered.

China is the epicentre of the crisis, with most infections and deaths, followed by Italy, Iran and South Korea. 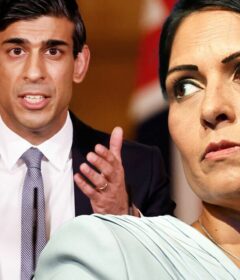 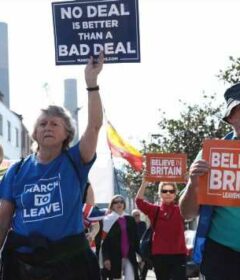 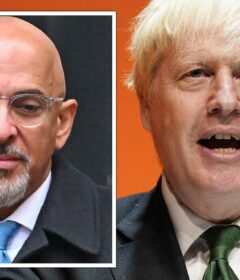