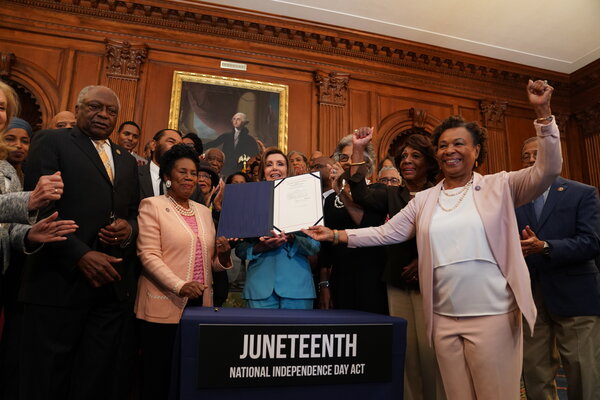 President Biden is scheduled on Thursday to sign legislation making Juneteenth a federal holiday, the day after the House voted overwhelmingly to enshrine June 19 as the national day to commemorate the end of slavery in the United States.

The Senate rushed the measure through with no debate earlier this week after clearing away a longstanding Republican objection, and the House approved it on Wednesday by a vote of 415 to 14, with 14 Republicans opposed. Mr. Biden is expected to sign it at a ceremony Thursday afternoon where he and Vice President Kamala Harris are slated to speak.

Ron Klain, Mr. Biden’s chief of staff, said in a tweet on Thursday morning that most federal employees would observe the holiday on Friday, since it falls on a Saturday this year.

Juneteenth commemorates the end of slavery and is also known as Emancipation Day, Jubilee Day and Juneteenth Independence Day. Its name stems from June 19, 1865, when Maj. Gen. Gordon Granger in Galveston, Texas, issued General Order No. 3, which announced that in accordance with the Emancipation Proclamation, “all slaves are free.” Months later, the 13th Amendment was ratified, abolishing slavery in the final three border states that had not been subjected to President Abraham Lincoln’s order.

“Juneteenth celebrates African-American freedom while encouraging self-development and respect for all cultures,” said Representative Sheila Jackson Lee, Democrat of Texas and a lead sponsor of the legislation.