Bloomberg bows out of presidential contest but his money will stay

WASHINGTON (Reuters) – After a not-so-Super Tuesday, Michael Bloomberg is out of the presidential nomination contest. But the power of his $60 billion fortune is staying in.

Bloomberg on Wednesday switched from being a candidate to being a powerful backer of former Vice President Joe Biden, who dominated March 3 Super Tuesday voting in the race to challenge President Donald Trump in the Nov. 3 election.

Bloomberg, the 78-year-old former mayor of New York and one of America’s richest people, performed poorly at Tuesday’s polls, winning only the U.S. territory of American Samoa despite spending more than $500 million in an unprecedented ad blitz.

In announcing he was ending his presidential run, he also endorsed Biden, who like Bloomberg is a moderate and is now the leading contender to take on the self-described democratic socialist, U.S. Senator Bernie Sanders, for the Democratic Party nomination.

“I will work to make him the next president of the United States,” Bloomberg said of Biden in a statement.

It was not immediately clear how Bloomberg would support Biden. When asked what the support will look like, an official in Bloomberg’s former campaign pointed to his past pledge to keep campaign infrastructure in place through November to help Democrats defeat Trump.

Bloomberg addressed a crowd of supporters in New York, thanking his staff for their efforts but providing no details on how he would spend his money.

Biden’s deputy campaign manager Kate Bedingfield said it wasn’t clear how Biden’s campaign will work with Bloomberg. “All of those details are still to be worked out,” she said on a call with reporters.

Bloomberg had used advertising as part of his novel electoral strategy, in which he skipped the four early-voting states and instead focused on the 14-state Super Tuesday contest.

His ad campaign on Facebook, costing him about $63 million, appeared to go dark on Wednesday. No ads were listed as active on the social media platform’s political ad library.

Biden, 77, the former vice president, accomplished his Super Tuesday goal of muscling Bloomberg aside and consolidating support of moderates to turn the race into a one-on-one contest against Sanders.

Since entering the race on Nov. 24, Bloomberg spent freely from the fortune he built on his eponymous financial information company on an ad campaign that vaulted him into the top tier of the Democratic field.

He showed what an avalanche of cash could and could not do. 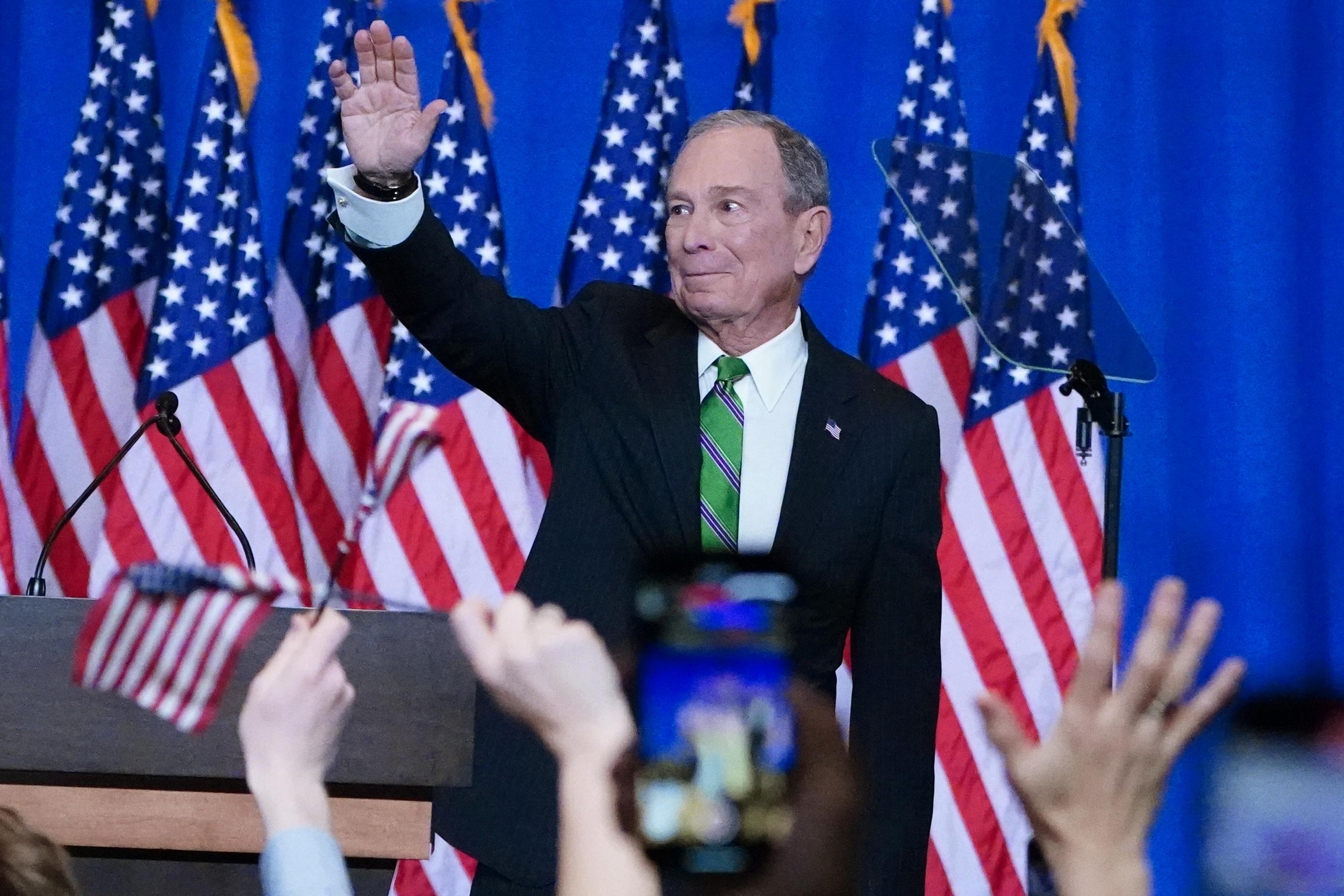 After Bloomberg blanketed the airwaves with promises that he could defeat the Republican Trump in November, his support among Democrats and independents in public opinion polls rose to around 15% from about 5% when he entered.

He hired thousands of staff and mounted a vigorous national tour focused on the 14 states that voted on Super Tuesday.

But he failed to win much more than 15% of the vote in any state on Tuesday. With counting still under way, Bloomberg’s vote tallies were enough to pick up some delegates to the party’s July convention – in Arkansas, California, Colorado, Tennessee, Texas and Utah.

Bloomberg’s campaign was dogged from the start by criticism over his past support of policies seen as racially discriminatory, including stop-and-frisk policing, which ensnared a disproportionate number of African-Americans and Latinos, as well as past sexist remarks.

Bloomberg apologized for stop-and-frisk a few days before he announced his candidacy.

His Democratic rivals attacked him in his first presidential debate on Feb. 19 in Nevada. U.S. Senator Elizabeth Warren lambasted him for having made crude jokes about women in years past and Sanders accused him of trying to buy the election.

Outside his rallies – which were often smaller than those of his rivals – protesters regularly waved signs echoing Sanders’ claim. Inside them, Bloomberg detractors and enthusiasts alike ate from tables stocked with free food.

Bloomberg was assailed for his spending despite his pledge to use his personal fortune to support the eventual Democratic nominee, whoever it was.

When Bloomberg got into the race many months after other leading candidates, he said he was worried none of the other candidates could beat Trump.

“Trump would eat ‘em up,” he told CBS’s “This Morning” on Dec. 6. He increasingly pitched himself as the centrist alternative to Sanders. In the Feb. 19 debate, he described Sanders’ policies as “communism.”

Bloomberg’s political fortunes initially rose after Biden, who led in public opinion polls during much of 2019, performed poorly in the first three nomination contests: Iowa, New Hampshire and Nevada.

Bloomberg did not compete in those races, nor in the fourth contest in South Carolina, saying his late entry made it impossible to assemble a competitive election staff. 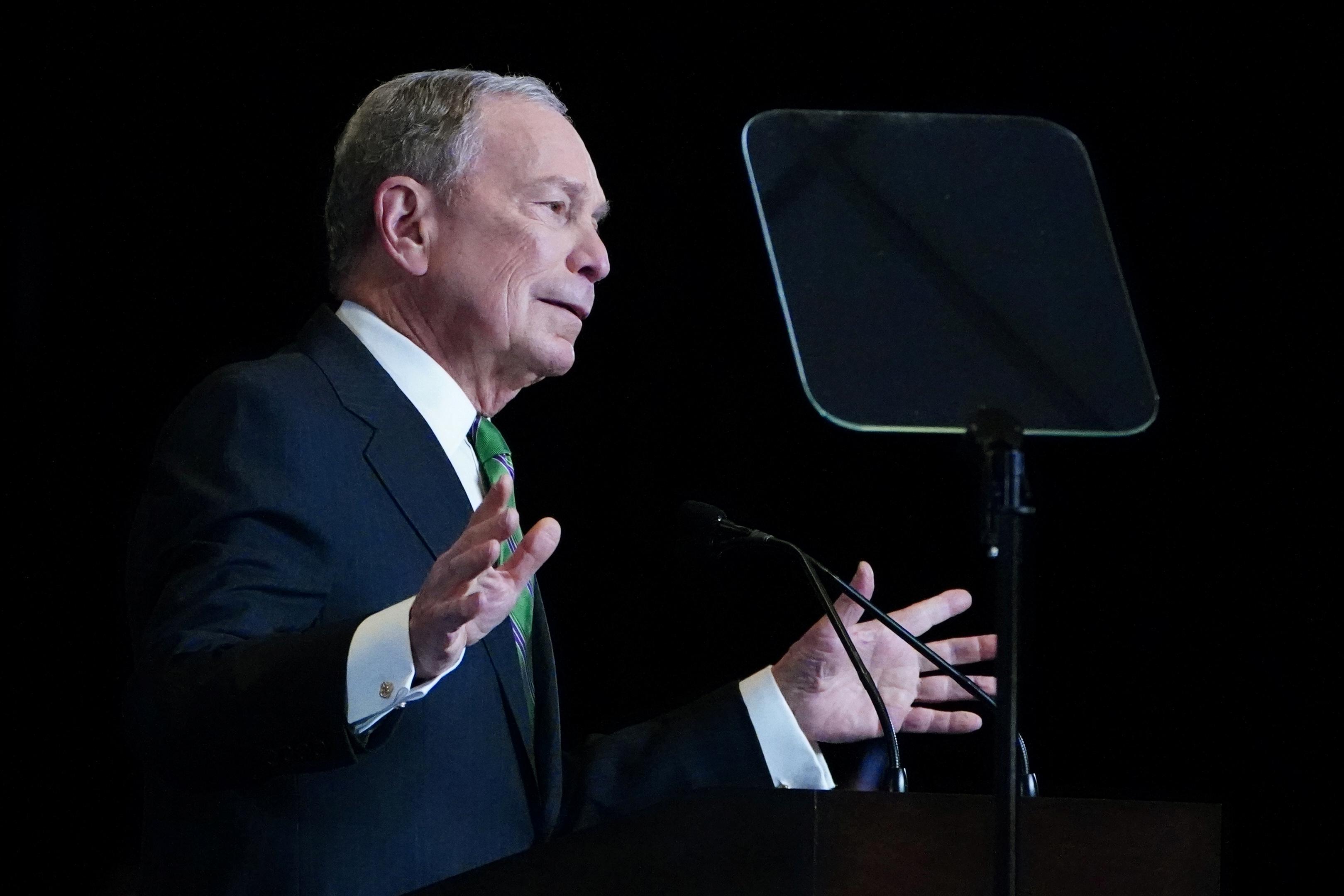 After spending much of his life as a Democrat, he switched to the Republican party in 2001 to run for mayor of New York. He became an independent in 2007, and switched back to the Democratic Party in 2018.

His past as a Republican also dogged him during his presidential run. Warren attacked Bloomberg at the Democrats’ Feb. 25 debate for giving money in 2012 to support the election campaign of South Carolina Senator Lindsey Graham, a Republican and a key ally of Trump.