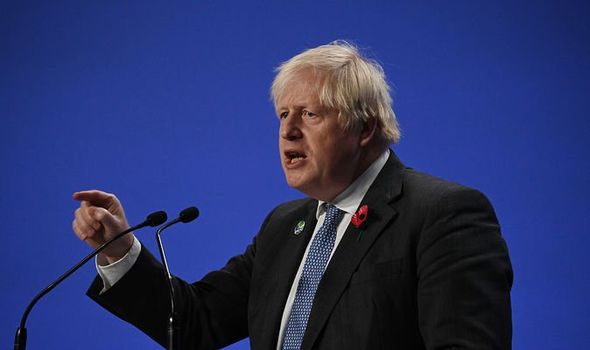 In a passionate plea, the Prime Minister urged his counterparts to “pick up their phones” and tell their COP26 negotiating teams to agree a deal to halve greenhouse gas emissions by 2030. He said: “The negotiations are getting tough. With only a few days left, there is still a huge amount to do.

“You cannot now sit on your hands as the world asks you to act ‑ because the world knows what a mess our planet is in.”

Mr Johnson returned to the United Nations summit in Glasgow in a bid to inject more urgency into the final days of talks.

With the gathering due to conclude tomorrow, officials and campaigners fear a seven-page draft text for an agreement falls short of the commitments needed to limit temperature rises to 1.5C this century.

Writing in the Daily Express today, naturalist and TV presenter Chris Packham says: “There is a lot of fear that the posturing will fail to translate to real action.”

At a COP26 news conference, the Prime Minister said the summit had brought the world “closer than it has ever been to signalling the beginning of the end” of climate change.

He described it as “the greatest gift we can possibly bestow on our children and our grandchildren and generations unborn”.

He added: “At COP26, in these final days, we just need to reach out together and grasp it.”

Mr Johnson said failure to agree a significant deal would be “colossal ‑ an absolute disaster for the planet”.

He added: “It’s clear that after a surge of really positive, game-changing announcements last week ‑ on methane, on finance, on forests in particular ‑ we are now firmly in the hard yards, the nuts and bolts of international climate diplomacy. The line is in sight, but if we’re going to get there we need a determined push to get us over the line.

“We need to be more ambitious and we need more credible plans.

“We have to bridge the gap between where we are and where we need to be if we’re going to cut emissions in half by 2030. We need to pull out all the stops.”

Mr Johnson feared leaders were threatening to “default” on the action needed now.

But he said they had “no excuse” after hearing from nations suffering devastating effects of climate change.

He said: “The world has heard leaders from every country, continent, stand here and acknowledge the need for action.

“The world will find it absolutely incomprehensible if we fail to deliver that. And the backlash from people will be immense and…long-lasting.

“We all agree what needs to be done, we just need the courage to actually get on and do it.”

The draft agreement urged countries to “revisit and strengthen” emissions-cutting targets for 2030 in their action plans by the end of 2022 to limit global warming to 1.5C.

It also called on governments to accelerate the phasing-out of coal and subsidies for fossil fuels. And it urged developed countries to at least double climate finances for developing countries.

Greenpeace UK’s Kate Blagojevic said Mr Johnson’s pleas to leaders to “pull out all the stops” would be dismissed by countries threatened by droughts and extreme weather as “insincere midweek muzac”.

But COP26 President Alok Sharma said: “We all know what is at stake in these negotiations and indeed the urgency of our task.

“What we agree in Glasgow will set the future for our children and grandchildren. And I know no world leader…will want to fail them.”

COP26, numerically alone, tells you we’re at least on our 26th attempt to do something about climate change.

I think there’s more than widespread scepticism. There is a lot of fear that the posturing will fail to translate to real action.

But what has been so heartening is the fringe events around COP26 and meeting a lot of people who are extremely able and very keen to get started on getting the world into a better state.

I think whatever happens here, it’s been a useful focus for not just the delegates in Glasgow but for the whole world to think about climate change and biodiversity loss.

This conference, I hope, has helped people realise we need to come together to make a difference.

I very much consider this event to be one of the last stands that we’re taking.

I think, if there are significant failures here, it won’t be long before our decision makers are held to account by the assistance of planet Earth.

There’s not a corner of the world that isn’t represented here.

Everyone has grave concerns about the impact of climate change on their lands and their people.

I’m not pessimistic because we have a toolkit full of solutions. We just need to roll them out far more quickly and urgently.

Chris Packham is a naturalist and TV presenter