Home » Politics » Brexit: Ulster pact must have consent from all, insists Boris Johnson

Brexit: Ulster pact must have consent from all, insists Boris Johnson

He said there had to be east-west as well as north-south consent, after red tape on goods moving from Great Britain exposed fresh divisions between unionists and nationalists. Mr Johnson said the protocol, which keeps the Irish land border open but imposes extra paperwork on supplies from the rest of the UK, should guarantee the peace process and the 1998 Good Friday Agreement. He said: “There has got to be a balance and symmetry in that. We want to ensure the protocol upholds the wishes of both communities and has the consent of both.”

The arrangements are designed to keep the region in the EU’s single market for goods to preserve friction-free business on the island.

But loyalist leaders have withdrawn support for the Good Friday Agreement, which largely ended decades of violence.

The UK Government has extended until October some grace periods of light-touch regulation on goods arriving in Northern Ireland from Great Britain. The EU has threatened legal action.

Mr Johnson said: “We think it is lawful, indeed we think it is right, in view of the impact on the peace process and the Good Friday Agreement and the need to have consent from both communities.” 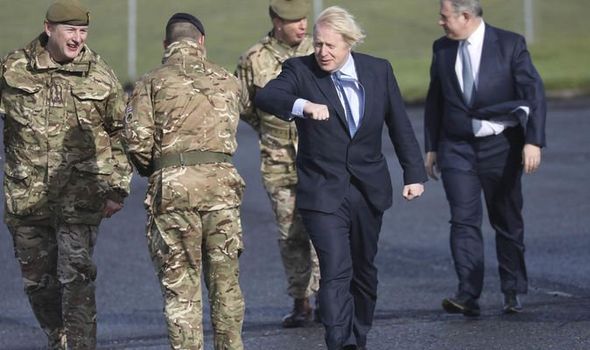 Saying Mr Johnson had been in “listening mode” and “alive to the issues”, she said: “Rather than protect the Belfast Agreement and its successor agreements, the protocol has created societal division and economic harm.”

Mrs Foster’s Sinn Fein power-sharing partner Deputy First Minister Michelle O’Neill, refused to welcome Mr Johnson to Belfast after a request for a political meeting with her and her party leader Mary Lou McDonald was not accepted.

Mr Johnson also visited RAF Aldergrove in Co Antrim, where he met military staff who have been helping during the pandemic.

The Prime Minister warmed up for his Northern Ireland trip by going for a morning run in London with his dog Dilyn.