The Prime Minister suggested he could deploy the “nuclear” measure unless people obey the rules. Mr Johnson’s threat came as he dramatically postponed easing the current lockdown restrictions after the rate of infection doubled during July. Plans to allow wedding receptions to have up to 30 people and a pilot scheme to bring crowds back to sports events have also been delayed.

The PM said he was “squeezing the brake pedal” because the number of cases has begun to accelerate across the country.

He vowed not to stand by and allow the virus to “cause more pain and heartache”.

Mr Johnson stopped short of enforcing tighter restrictions but hinted he could do so, a move he had previously likened to using a nuclear deterrent, if infections continue to rise.

He said: “At this stage, we are not changing the rules on social contact nationally.

“I don’t want to tell people to spend less time with their friends.

“But unless people follow the rules and behave safely, we may need to go further.”

The decision immediately set alarm bells ringing among the business community, who said it would be a “hammer blow” to the economy. 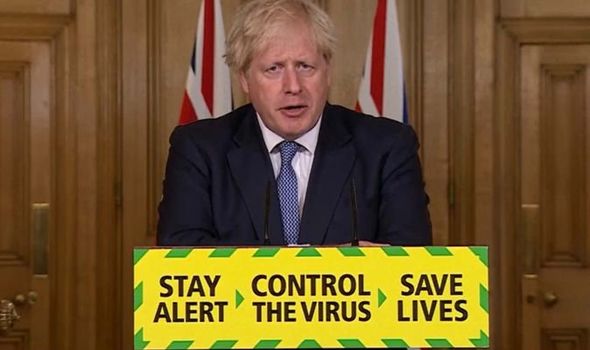 Speaking in Downing Street Mr Johnson announced that most of the measures which were to be lifted in England today would now be put on ice for at least two weeks.

That means the scheduled return of casinos, ice rinks, bowling alleys and close contact services like beauticians has now been pushed back to August 15.

Face coverings will also become mandatory in indoor settings such as museums and places of worship from August 8. The British Chambers of Commerce said the move would be a blow to firms trying to get back on their feet.

And industry leaders from the beleaguered hospitality trade branded it “devastating” for pubs, restaurants and holiday resorts across Britain.

BCC co-executive director Claire Walker said: “While tackling the public health emergency must be the priority, these announcements – made at short notice – will be a hammer blow to business and consumer confidence at a time when many firms were just starting to get back on their feet.

“Business communities need as much clarity as possible from Government if they are to plan ahead and rebuild their operations in the coming months.

“Ministers must also consider extending support to all firms, many of whom will be forced to close for an even more prolonged period, as well as targeted measures to help businesses placed under localised lockdowns.”

“However, we were warned that restrictions will need to be responsive to any resurgence in transmissions.

“If the rules for businesses are going to be stop-start – which is understandable – then business support from Government needs to reflect that fact.

“The job retention scheme, bounce back loan scheme and tax breaks have had a big impact to date, and it would be wrong to wind down support while restrictions are increased.”

Chief executive Kate Nicholls said: “We understand that safety is the priority, but it is still devastating news for hospitality businesses. They have spent a lot of time and money, which they can ill afford to lose at the minute, getting ready to reopen. For those people who work in those sectors, the security of their jobs remains uncertain.”

The PM’s announcement came after local lockdown measures were announced in parts of the North-west of England and parts of West Yorkshire, banning people from different households meeting indoors or in gardens following a spike in virus cases.

He said the decision was taken because coronavirus cases have started to “creep up” to 4,200 new infections every day, up from 2,000 per day at the end of June.

He said: “As we see these rises around the world, we can’t fool ourselves that we are exempt.

“We must be willing to react to the first signs of trouble.

“We cannot be complacent and I won’t stand by and allow this virus to threaten to cause more pain and more heartache in our country.”

The PM also warned that there would be a “greater police presence” to ensure face coverings were being worn when required.

He urged people to continue to wash their hands and to social distance, saying it was the “only real utensil” that the UK had without a vaccine as other countries struggled to stop a second wave. The move comes after the Office for National Statistics yesterday revealed the number of coronavirus cases had increased, with 35,700 people infected with the bug.

The new statistics suggest around 4,200 new cases were recorded per day through July 20 to July 26.

This is up from an estimated 2,800 new cases a day in the previous week.