Dominic Cummings blasts the civil service as a ‘disaster zone’

And he said he made Boris Johnson vow to back civil service reform before agreeing to work in Downing Street. In his first public appearance since leaving Downing Street, the former No 10 chief said unnecessary bureaucracy destroyed effective operations and drove out the best people. In a brutal attack on Mr Hancock’s handling of the Covid jabs programme, Mr Cummings, 49, told the Commons Science and Technology Committee: “It’s not coincidental that the vaccine programme worked the way that it did.

“To do that we had to take it out of the DoH, we had to have it authorised very directly by the PM and strip away all the normal nonsense that we can see is holding back funding therapeutics.

“In spring 2020 you have a situation where DoH was just a smoking ruin in terms of procurement and PPE and all of that. You had serious problems with the funding bureaucracy for therapeutics on Covid. So that was the kind of context for it.”

He added: “Patrick Vallance [the Government’s chief scientific adviser] then came to No 10 and said this shouldn’t be run out of the Department of Health, we should create a separate task force. We also had the EU proposal, which looked like an absolute guaranteed programme to fail debacle.

Mr Cummings’s comments came as he was grilled by MPs over the Government’s £800million “high-risk, high-reward” Advanced Research & Invention Agency (Aria). He championed the idea of an independently run research body before his dramatic departure in November. 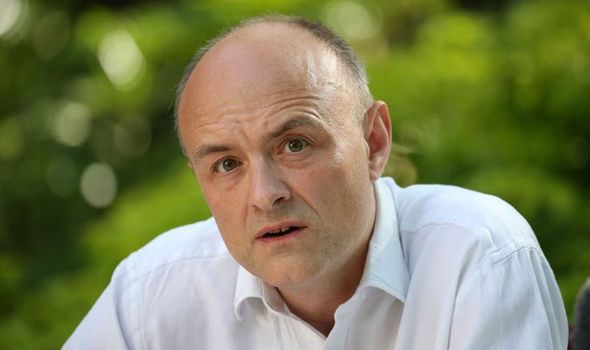 He said as the country emerges from lockdown, there needed to be an “urgent very, very hard look” at “what went wrong and why” during the pandemic.

Mr Cummings said: “One of the most obvious lessons is the incredible value potentially of getting science and technology stuff right, the disaster that can come if you don’t get it right.” It was this “horrific Whitehall bureaucracy” that he said he wanted to strip away when he backed the Aria agency.

Mr Cummings told MPs: “The Prime Minister came to speak to me the Sunday before he became prime minister and said would I come in to Downing Street to try to help sort out the huge Brexit nightmare.

“I said, ‘Yes, if first of all you are deadly serious about actually getting Brexit done and avoiding a second referendum; second, double the science budget; third, create some Aria-like entity, and fourth, support me in trying to change how Whitehall works and the Cabinet Office works because it is a disaster zone’. And he said, ‘Deal’.”