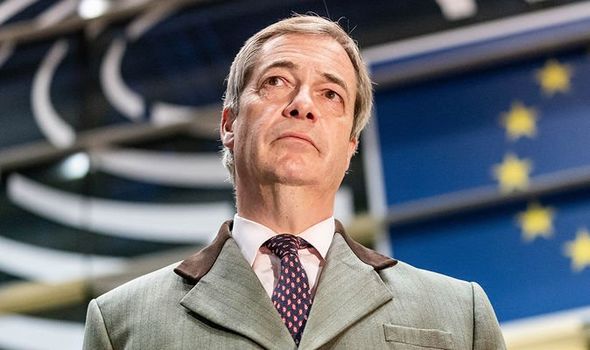 The shot across the bow from former Brexit Party leader turned GB News host Nigel Farage comes as an exclusive poll for the Sunday Express shows that more than half of those surveyed believe the migrants should be returned straight back to France.

According to the Redfield and Wilton poll of 1,500 people 56 percent believe that the migrants who are usually trafficked by criminal gangs and make the dangerous crossing in small boats, should be returned immediately.

Only 16 percent opposed returning the migrants to France.

Mr Farage said: “The British people have good common sense and want our borders controlled. This issue is destroying trust in this Brexit government in a big way.”

A source close to the Home Secretary admitted to being surprised that the results was “only 56 percent” with public opinion inflamed over the illegal crossings.

Priti Patel has been hampered by the Human Rights Act and international law in stopped the flow of illegal migrants with the figure in the last year expected to hit 65,000.

She is considering plans to set up an offshore processing centre in another country to send the migrants while their asylum claims are being considered.

The Home Secretary is also looking at using the military to police the Channel.

But even though international agreements state that migrants can be returned to the last safe country they departed, the UK Government has not returned them to France because they claim to have come from somewhere else.

However, the issue is causing increasing frustration on the Tory backbenches with many fearing they will lose their seats because voters will go to other parties on the right with stronger migration control policies such as Reform led by Richard Tice or Laurence Fox’s Reclaim Party.

Ipswich MP Tom Hunt, deputy chairman of the influential Common Sense Group of Conservative MPs which has campaigned for much tougher immigration measures, said: “Based on the emails and comments I’ve been getting from constituents I’m surprised it’s just 56 percent.

“Whether by intercepting the boats and taking them straight back to France or offshore processing we need a new approach urgently.

“The message should be clear. Don’t bother trying to get here illegally because you’ll be immediately dispatched back to France or another country for offshore processing.

“They should be claiming asylum in France or the first safe country they reach. If they refuse to do so it’s hard to view them as anything other than an economic migrant.”

Ashfield MP Lee Anderson, another leading Common Sense Group member, said: “If you surveyed my constituency you would get 90 percent or more in favour of sending them straight back to France.

“The problem is we are a soft touch in this country. We give them free hotel accommodation when they arrive, free health care, benefits. No wonder they are so desperate to come.

“The Government needs to follow my proposal of having offshore processing centres where their applications can be dealt with before they are sent home.

“If we did that we would see the numbers drop quickly.”