Home » Politics » For Manchin, a Divided Senate Is a ‘Golden Opportunity’ for Action

For Manchin, a Divided Senate Is a ‘Golden Opportunity’ for Action

WASHINGTON — A year ago, Joe Manchin III was ready to quit.

As the most conservative Senate Democrat, he saw nothing but dysfunction and inaction when he looked around on Capitol Hill. “This place sucks,” he repeatedly declared. As he often has since arriving in Washington, he openly mulled leaving to try to reclaim his old job: governor of West Virginia.

Instead, he stayed for a second term. Now, with President-elect Joseph R. Biden Jr. preparing to govern from the middle in a Congress whose thin majorities will force him to compromise on almost every priority, Mr. Manchin, a centrist, suddenly finds himself at the center of relevance in the nation’s capital.

In his office on a recent afternoon, seated not far from a framed quote from President John F. Kennedy stressing independence from political party, Mr. Manchin, 73, was feeling energized. He paged through a proposal he was developing for a new coronavirus relief deal and said he was imagining a more moderate course for Congress.

“I think we have a golden opportunity to bring the country back together and for us to work in the middle,” Mr. Manchin said excitedly. “I’ll tell you the reason why: The numbers are so close with what the Democratic House members lost. For Nancy Pelosi, she’s going to have to work with people that have a more moderate view than some of the people that pushed her from the left.”

If Democrats are able to win two runoffs in Georgia in January and take control of the Senate, any plans to enact a liberal agenda — such as increasing the number of Supreme Court justices — will have to go through Mr. Manchin. Likewise, if Republicans win at least one of the Georgia races, allowing them to maintain Senate control, they will need centrists in both parties to help block progressive items or pass compromise legislation.

That is the situation that Mr. Manchin said he considered more likely. He is already preparing for a power dynamic that he asserted would give him and three moderate Republicans — Susan Collins of Maine, Lisa Murkowski of Alaska and Mitt Romney of Utah — a big role in determining what happens at the dawn of Mr. Biden’s presidency.

With Vice President-elect Kamala Harris empowered to break ties, Mr. Manchin noted that it would take only two Republican defections to hand Democrats a majority on any given measure.

“It behooves everybody to start working together,” he said during a wide-ranging interview in his office. “If they don’t, it doesn’t take many of us to say, ‘Guys, we’ve given all of you a chance. We haven’t done our job for the last 10 years, and we’re going to start.’”

In recent days, Mr. Manchin has been working to corral support for a new coronavirus stimulus package, racing around the Capitol asking his colleagues what price range they are comfortable with and directing his chief of staff, Lance West, to draw up proposals. Mr. Manchin said he thought about $1.2 trillion might be acceptable to finally reach a deal — about half of what his party’s leaders had been pushing for before the election.

He has been in talks with a bipartisan group of senators to try to forge a deal. They include the three Republican moderates, as well as Senator Bill Cassidy of Louisiana; Senator Angus King, independent of Maine; and the Democratic senators Richard J. Durbin of Illinois, Jeanne Shaheen of New Hampshire and Mark Warner of Virginia.

“Something needs to be done before Joe Biden becomes president,” Mr. Manchin said. “I’ve got people who aren’t going to make it to February or March.”

He is also ready to do battle with the progressive left, whose ire he drew when, in an interview this month, he responded to a question about some liberals’ calls to defund the police with the phrase, “Defund, my butt.” 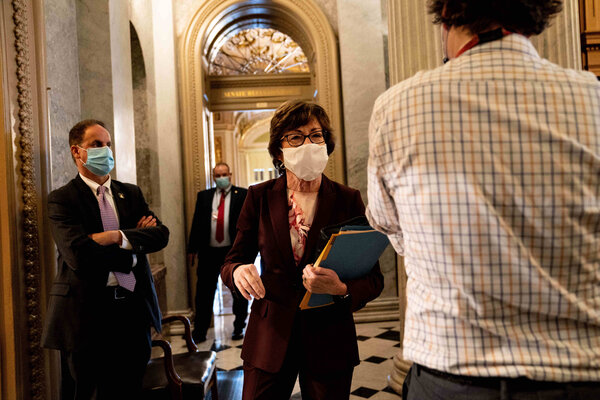 In response, Representative Alexandria Ocasio-Cortez, the progressive firebrand from New York, posted a photo on Twitter of her glaring at Mr. Manchin as he applauded during President Trump’s second State of the Union address.

“I guess she put the dagger stare on me,” Mr. Manchin said. “I don’t know the young lady — I really don’t. I never met her. I’m understanding she’s not that active with her bills or in committee. She’s more active on Twitter than anything else.”

That amounts to a sharp insult in a chamber where legislative prowess is prized. Mr. Manchin said he would stand firm against the agenda that the left flank of his party is pushing.

Mr. Manchin is also a staunch opponent of another step for which progressives have advocated, having loudly spoken out against a move to change Senate rules so that the majority could muscle through legislation with a vote of 51, rather than requiring that bills meet a 60-vote threshold to advance. Should Democrats win control of the chamber, the change would allow Mr. Biden to circumvent Republican opposition and push through his policy priorities.

“I can assure you I will not vote to end the filibuster, because that would break the Senate,” Mr. Manchin said. “If you’ve got to blow up the Senate to do the right thing, then we’ve got the wrong people in the Senate.”

Instead, Mr. Manchin said he and a group of like-minded senators in both parties — including many of those with whom he is discussing a new relief package — were eyeing a different change to the rules to empower the rank and file. Their idea is to allow any bill approved by a committee with bipartisan support to advance to the floor. That would dilute the unilateral power of the majority leader — currently Senator Mitch McConnell, Republican of Kentucky — to control which measures advance.

“Before we know definitely who is going to be the majority leader, we should make the changes of how the Senate should work,” Mr. Manchin said of the proposal, which is exceedingly unlikely to be successful.

Still, John C. Kilwein, the chairman of the political science department at West Virginia University, said Mr. Manchin would be “incredibly important” in the event of a 50-50 Senate. His stances would also serve as useful cover for Mr. Biden and Senator Chuck Schumer, Democrat of New York and the minority leader, from criticism they are likely to face for not fully embracing the progressive agenda.

“He dashed progressives’ hopes already of doing away with the filibuster and packing the court,” Mr. Kilwein said.

In some ways, Mr. Manchin is a throwback to a bygone era. A gun owner who grew up in the small town of Farmington, W.Va., and lives on a houseboat while in Washington, he keeps photographs of children killed in the 2012 Sandy Hook Elementary School shooting on his office wall. Teaming up with Senator Patrick J. Toomey, Republican of Pennsylvania, Mr. Manchin tried in 2013 to craft some modest gun safety measures to prevent such mass killings from happening again, but their efforts stalled amid bipartisan opposition.

He often describes having learned to govern with “common sense” from watching small-town officials navigate problems like whether to put in or take out a stoplight.

Charles S. Trump IV, a Republican state senator from West Virginia who has known Mr. Manchin for three decades and is not related to the president, said the senator took after his uncle A. James Manchin, an “icon of West Virginia politics.” The elder Mr. Manchin was an entertaining politician who rid the state’s countryside of thousands of junked cars and old tires.

As the state’s working-class rural white voters — who once voted for Democrats partly because of strong ties to labor unions — shifted to the right, few Democrats could continue to win in West Virginia. The president won the state by nearly 40 percentage points this year. But Mr. Manchin held onto his seat in 2018, surviving the steepest re-election challenge of his career partly on the strength of the trust he has built with constituents over decades.

Mr. Trump, the state senator, recalled how Mr. Manchin as governor cut short a trip in 2006 to attend the Sugar Bowl in Atlanta, where he planned to cheer on the West Virginia University Mountaineers, when there was a mine disaster back home.

“He came straight home,” Mr. Trump said. “He knew it would be important to the people during a crisis that he was there.”

This year, Mr. Manchin crossed party lines when he became the only Democratic senator to endorse Ms. Collins in her fourth re-election attempt against a strong challenger, Sara Gideon, whom many in Congress expected to win. When Ms. Collins defied the polls, Mr. Manchin was one of the first to call and congratulate her.

“He’s courageous,” Ms. Collins said. “I admire he does the things he believes are right, even if he gets a lot of grief from the Democratic leader for it.”

Ms. Collins said she looked forward to working with Mr. Manchin on issues such as reducing the price of prescription drugs and a broad infrastructure package. But the obstacles are steep, with powerful groups on both sides of the political spectrum “demanding 100 percent compliance” with their views, she said.

Ms. Murkowski said she hoped a functioning Senate was not “a pipe dream from a bygone era.”

“For those of us more in the moderate camp, it’s a very important role that needs to be played, and I’m looking forward to playing a part in that,” she said. “I’m tired of the bitter partisan divide we’ve seen. I want to try to figure out how we are governing again for all the country, not just for the Republicans.”