WASHINGTON — Marjorie Taylor Greene had just finished questioning whether a plane really flew into the Pentagon on Sept. 11, 2001, and flatly stating that President Barack Obama was secretly Muslim when she paused to offer an aside implicating another former president in a crime.

“That’s another one of those Clinton murders,” Ms. Greene said, referring to John F. Kennedy Jr.’s death in a 1999 plane crash, suggesting that he had been assassinated because he was a potential rival to Hillary Clinton for a New York Senate seat.

Ms. Greene casually unfurled the cascade of dangerous and patently untrue conspiracy theories in a previously unreported 40-minute video that was originally posted to YouTube in 2018. It provides a window into the warped worldview amplified by the freshman Republican congresswoman from Georgia, who in the three months since she was elected has created a national brand for herself as a conservative provocateur who has proudly brought the hard-right fringe to the Capitol.

In the process, Ms. Greene, 46, has also created a dilemma for Republican leaders, who for months have been unwilling to publicly rebuke or punish her in any way for her inflammatory statements, in part for fear of alienating voters delighted by her incendiary brand of politics and conspiratorial beliefs.

After avoiding the issue for months in the hope that it would resolve itself, Republicans are now facing calls from Democrats to expel Ms. Greene from Congress, pressure from a prominent group of Jewish Republicans to discipline her, and private consternation from within their own ranks.

Their reticence to take action is yet another example of how Republican leaders have allowed those forces to fester and strengthen. Some leaders have privately said they are eager to move past the fringe movements and the charged messaging used by President Donald J. Trump that fueled the assault on the Capitol on Jan. 6.

Representative Kevin McCarthy, Republican of California and the minority leader, has yet to say anything personally about Ms. Greene’s comments or conduct, even after a week in which a slew of problematic social media posts and videos have surfaced from the years before she was elected. In them, Ms. Greene circulated and endorsed a seemingly endless array of hate speech and conspiracy theories explicitly rooted in Islamophobia, anti-Semitism and the belief that government actors were secretly behind a sweeping range of violence.

Ms. Greene suggested in 2018 that a devastating wildfire that ravaged California was started by “a laser” beamed from space and controlled by a prominent Jewish banking family with connections to powerful Democrats. She endorsed executing Democratic lawmakers, including Speaker Nancy Pelosi. She served as a prolific writer for a now-defunct conspiracy blog called “American Truth Seekers,” writing posts with headlines including “MUST READ — Democratic Party Involved With Child Sex, Satanism, and The Occult.” And she argued that the 2018 midterm elections — in which the first two Muslim women were elected to the House — were part of “an Islamic invasion of our government.”

Ms. Greene has repeatedly claimed in multiple videos and social media posts that several school shooting massacres were “false flag” events perpetrated by government officials in an attempt to drum up support for gun control laws. In an October 2020 video surfaced on Friday by Mother Jones, she said that the “only way you get your freedoms back is it’s earned with the price of blood.”

Ms. Greene is perhaps best known for having endorsed QAnon, the pro-Trump conspiracy movement that claims that Mr. Trump was facing down a shadowy cabal of Democratic pedophiles. (She told Fox News last year that she “chose a different path,” and a spokesman, Nick Dyer, told The New York Times this week that she did not support QAnon.)

Sent a list of detailed questions about her beliefs and postings, Mr. Dyer declined to respond to any of them. In her own statement posted on Twitter on Friday afternoon, Ms. Greene assailed the “radical, left-wing Democrat mob” and reporters she said were trying to smear her, and claimed she was profiting politically and financially from the outrage she has provoked, saying that every negative news report “strengthens my base of support at home and across the country.”

She also issued what amounted to a threat to top Republicans who might be contemplating punishing her, warning that they would pay steep consequences.

“If Republicans cower to the mob, and let the Democrats and the fake news media take me out,” Ms. Greene said, “they’re opening the door to come after every single Republican until there’s none left.” 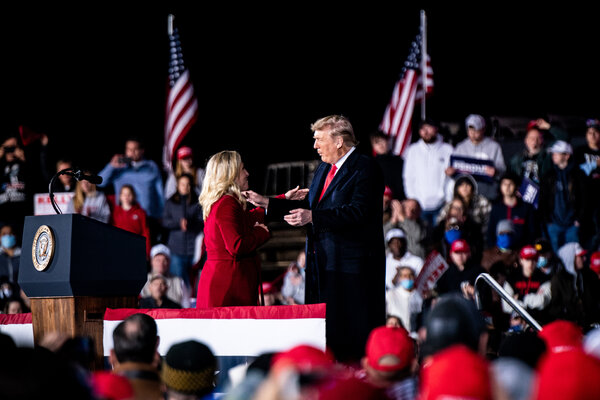 “She repeatedly used offensive language in long online video diatribes, promoted bizarre political conspiracy theories, and refused to admit a mistake after posing for photos with a longtime white supremacist leader,” the group said. “It is unfortunate that she prevailed in her election despite this terrible record.”

A spokesman for Mr. McCarthy told Axios this week that newly surfaced Facebook posts written by Ms. Greene and reported by CNN, in which she discussed executing top Democratic politicians, were “deeply disturbing” and that Mr. McCarthy planned to “have a conversation” with her about them next week.

But Mr. McCarthy’s silence so far reflects, in part, the sway Mr. Trump still has over the Republican Party and its leaders. The former president has praised Ms. Greene effusively and refused to condemn QAnon, despite being asked to disavow it repeatedly while in office.

In her own telling, Ms. Greene became more outspoken about her politics in 2016, after she sold the CrossFit gym she owned and felt she no longer needed to worry about alienating her customers by stating her beliefs.

She began traveling to Washington for conservative events, including a prayer rally hosted by the White House, and to lobby lawmakers against passing gun safety measures. On one such trip, Ms. Greene accosted David Hogg, a student who had survived a 2018 school shooting in Parkland, Fla., who was also on Capitol Hill, but to lobby in support of stricter gun laws. In a video that CNN unearthed this week, Ms. Greene follows Mr. Hogg as he walks toward the Capitol, calling him a “coward” and accusing him of “using kids” to promote his own political agenda.

When Ms. Greene decided to run for Congress, she initially started her campaign in a Georgia district held by Representative Lucy McBath, a Democrat. But after Representative Tom Graves, a Republican, announced he would retire, Ms. Greene moved her campaign to his more conservative district. She eventually placed first in a crowded primary race, and advanced to a runoff election against Dr. John Cowan, a mild-mannered neurosurgeon.

On the campaign trail, Ms. Greene presented herself as a deeply conservative, pro-Trump Christian mother and business owner, arguing that her work in the construction industry had imbued her with the toughness that comes from working in a male-dominated field. She railed against the ascendant progressive wing in Congress, emphasized the importance of the Second Amendment while toting an AR-15, and warned of “thousands” of immigrants “pouring over” the southwestern border.

Ms. Greene largely veered away from the conspiratorial on the trail, though she did cut a campaign ad claiming that “‘Deep State’ actors tried to sabotage President Donald J. Trump before he even took office” and claimed on her campaign accounts that George Soros, the billionaire investor and Democratic donor, was “bankrolling left-wing movements worldwide who want to destroy Israel.”

The messaging raised alarm at the time among House Republican leaders and some members of the Georgia delegation who worried that if elected, Ms. Greene could create a grave problem for their party. But they never mobilized to defeat her. While the top three House Republicans condemned a series of racist videos Ms. Greene made, surfaced by Politico, only Representative Steve Scalise of Louisiana, the No. 2 Republican, endorsed Dr. Cowan. Mr. McCarthy and Representative Liz Cheney of Wyoming, the third-ranking leader, stayed neutral.

Privately, according to a person familiar with their thinking, top Republicans hoped that outside groups would swoop into the primary race in support of Dr. Cowan and weaponize Ms. Greene’s incendiary comments against her, dooming her candidacy. But the outside effort never materialized.

Instead, Ms. Greene’s campaign received an important boost when the political arm of the ultraconservative Freedom Caucus endorsed her, as did Representatives Andy Biggs of Arizona, the group’s chairman, and Jim Jordan of Ohio, a founder. She handily won the runoff in August and cruised to victory in November.

That left Republican leaders hoping that, once sworn in, Ms. Greene would clean up her act, disavowing her past comments and dialing back her outlandish rhetoric.

Instead, she charged into Congress and immediately faced scrutiny for her support of the “Stop the Steal” campaign that falsely claimed that Mr. Trump had won the 2020 presidential election.

She referred to Jan. 6, the day Congress was slated to formalize the election results, as Republicans’ “1776 moment” in the lead up to the violent storming of the Capitol by pro-Trump rioters. After the rampage, she pledged that Mr. Trump would “remain in office” and that attempts to remove him from the White House constituted “an attack on every American who voted for him.”

Days later, she announced she would file articles of impeachment against President Biden.