Home » Politics » Harris and Pelosi make history standing behind a president during a formal address to Congress.

Harris and Pelosi make history standing behind a president during a formal address to Congress. 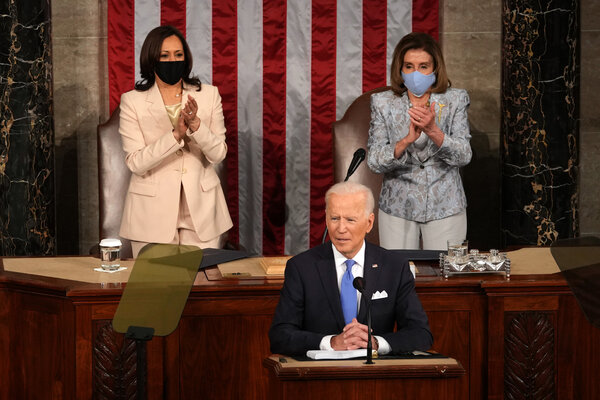 President Biden kicked off his address to a joint session of Congress with a string of words that no American president has ever said before: “Madam Vice President and Madam Speaker.”

For the first time, the president is delivering his speech while standing in front of two women — Vice President Kamala Harris and Speaker Nancy Pelosi of California. While Ms. Pelosi has spent several State of the Union addresses sitting on the podium behind the president, this is Ms. Harris’s first time.

The two women greeted each other with a friendly elbow bump before the president arrived.

For an event that is wrapped up in pomp and circumstance, the images from such nights can leave a lasting impression. And this tableau — a visual representation that the first and second in line of presidential succession are both women — depicts the progression of women in American politics.

Hours before the speech, when asked on MSNBC about the historic moment, Ms. Pelosi said that while it’s “exciting” it’s also “about time.”