The competition for the Democratic mayoral nomination in New York City is wide open. It’s the kind of race that ranked-choice voting is meant to help, by letting voters support their top choice without forfeiting the opportunity to weigh in on the most viable candidates.

It’s also the kind of race that might test one of the major risks of ranked-choice voting: a phenomenon known as ballot exhaustion. A ballot is said to be “exhausted” when every candidate ranked by a voter has been eliminated and that ballot thus no longer factors into the election.

With so many viable candidates and most New Yorkers using ranked choice for the first time, all of the ingredients are in place for a large number of exhausted ballots. If the race is close enough, it’s a factor that could even decide the election.

Ranked-choice voting has been implemented by cities and other local governments in eight states, and statewide in Maine. It will be used in the New York mayoral race for the first time this year, allowing voters to rank up to five candidates in their order of preference.

If no candidate receives a majority of first preference votes, the race is decided by an instant runoff: The candidate with the fewest first-place votes is eliminated, and the votes of those who preferred the eliminated candidate will be transferred to those voters’ second choices. The process continues until one candidate wins a majority of the remaining ballots.

But such a system is complicated. It asks voters to make many more decisions than they would usually need to make, with a new and unusual set of rules. As a result, many won’t rank the maximum number of candidates. It creates the possibility that the election outcome might be different if every voter had filled out a full ballot.

A recent Manhattan Institute/Public Opinion Strategies surveys showed signs that ballot exhaustion might play a significant role in New York’s mayoral election. The poll, which asked voters to complete the full ranked-choice ballot, found Eric Adams leading Andrew Yang in a simulated instant runoff, 52 percent to 48 percent. Lurking behind the top-line results was a group comprising 23 percent of respondents who had ranked some candidates but had not ranked either Mr. Yang or Mr. Adams. If those voters had preferred Mr. Yang, the outcome of the poll might have been different.

A 23 percent ballot exhaustion rate would be quite high, but it would not be without precedent. In the 2011 San Francisco mayoral race, 27 percent of ballots did not rank either of the two candidates who reached the final round. And on average, 12 percent of ballots were exhausted in the three ranked-choice special elections for City Council held this year in New York City. 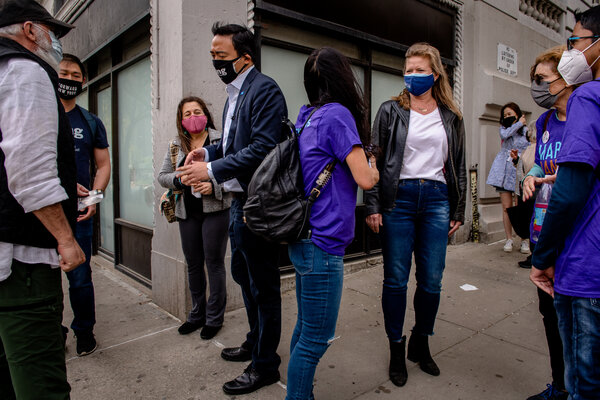 Even a smaller percentage of exhausted ballots can be decisive in a close race. One analogous case is the special mayoral election in San Francisco in 2018, when London Breed narrowly prevailed by one percentage point. In that race, 9 percent of ballots didn’t rank either Ms. Breed or the runner-up, Mark Leno.

It is impossible to know for sure, but there are plausible reasons to believe that Mr. Leno would have won the election if every voter had ranked one of the two final candidates. Mr. Leno, for example, won transferred votes — those cast by voters who had not selected either Ms. Breed or Mr. Leno as their first choice — by a margin of 69 percent to 31 percent; he would have won if the exhausted ballots had expressed a similar preference.

The large number of exhausted ballots in ranked-choice elections might be a bit of a surprise, given that the format is supposed to ensure that voters don’t waste their ballots by supporting nonviable candidates. In the archetypal case, ranked choice might allow voters to support a minor-party candidate, like Ralph Nader, without any risk of endangering their preferred major-party candidate, whom they could safely rank second.

But voters won’t always have the same clarity about which candidates will make the final round of voting as would have had in the 2000 presidential election, when Mr. Nader finished third as the Green Party candidate with almost three million votes. Even without ranked-choice voting, primary elections often feature fluid, multicandidate fields in which clear favorites are not nearly as obvious as a Democrat versus a Republican in the general election.

For good measure, ranked-choice voting tends to expand the number of options available to voters, clouding what might have otherwise been a relatively clear final choice. Interest groups and ideological factions have less incentive to coalesce behind a single candidate in a ranked-choice election, since they know their voters can still consolidate behind a single candidate on Election Day.

Partly as a result, the number of exhausted ballots tends to be highest in wide-open races, in which voters have the least clarity about the likely final matchup.

In the three special elections for New York City Council seats in which ranked choice has been used, the numbers of exhausted ballots were higher in races without a strong candidate on the first ballot. When the leading candidate had just 28 percent of the vote on the first ballot in the 15th District, for instance, 18 percent of voters had not ranked one of the top two candidates.