Labour’s shadow foreign secretary Lisa Nandy was highly critical of the British Government’s decision to cut the UK’s foreign aid budget on LBC. However, the Wigan MP faced a grilling from host Nick Ferrari over whether the money would be better put to use in her own constituency. The clash grew increasingly fraught as Mr Ferrari pressed the Labour MP on her party’s support for “throwing £3 billion across the world that we’re trying to save.”

Boris Johnson’s Conservative Government plans to “temporarily” cut the share of national income which is spent on international development.

The move could see foreign aid cut from 0.7 percent to 0.5 percent.

Ms Nandy told LBC: “The Chancellor is coming to the House today to lecture MPs about fiscal responsibility, having presided over one of the biggest wastes of money with the Covid contracts.

“Billions spent on PPE procurement for things that couldn’t be used in the end, billions given to friends of ministers without any proper procurement process and no track record in delivery.”

Mr Ferrari asked: “Why wouldn’t you rather see that money spent on the good people of Wigan?”

“The good people of Wigan is that they’re deeply affected by things that happen all over the world,” replied Ms Nandy.

The host fired back: “How are they affected by flatulent cattle in Colombia?

“Or police corruption in Kenya?

How does that affect the people of Wigan?”

Mr Ferrari accused Lisa Nandy of wanting to throw “£3 billion across the world that we’re trying to save.”

“I’m criticising you for someone who’s very grounded…you love and represent the people of Wigan.

“How are you telling them that they need to fund anti-corruption courses in Kenya?”

He demanded: “Tell me now, you can’t Lisa, you can’t…why is it important to crack down on corrupt cops in Nairobi for Mrs Jones in Wigan?”

Ms Nandy replied: “Well, because creating a more stable political system in other countries around the world directly deals with the rise of extremism, hatred, terrorism, and these are things that have never been controversial.

“There has been a cross-party consensus on this, the politics was taken out of it for a long time.

“Yet instead we’ve got the only Government in the G7 that is cutting aid in the middle of a pandemic.”

MPs are due to discuss the proposed cuts on Tuesday after Chancellor Sunak sprung an urgent debate on the issue on them on Monday. 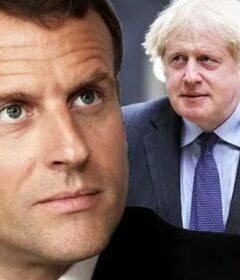