Ms Moran, 37, ended months of speculation last week by confirming she would join the race when nominations open in May.

But acting leader Sir Ed, 54, has swerved saying whether he wants the full-time job.

Speaking exclusively to the Mirror, he said: “We have a big crisis in the country, called the coronavirus.

“I think it’s incumbent on Liberal Democrats as a responsible party to play our role in tackling that.

“I think distractions about our leadership at the moment are just that – they’re not what people want to hear.” He added: “Distracting people at the moment is the wrong thing to do.

While staying tight-lipped about his intentions, he dropped a big hint he will join the contest, declaring: “I am acting leader and I am quite happy with doing that job.”

Party activists still shell-shocked from their election drubbing last December are likely to face a choice between Sir Ed, who was Energy Secretary during the Conservative coalition, and Ms Moran, who was elected in 2017. “Experience is an under-valued asset in politics,” he said.

“Sometimes patience is the right strategy … I have worked under a number of leaders and I’ve seen what’s worked and what hasn’t.”

During the election campaign, she boasted she could become Prime Minister – before losing her seat when she was dumped by voters.

She faced tough questions over her role as a minister – and Sir Ed would face similar scrutiny over his time in government. “Given this Tory Party has gone to the right in my view on many areas, we need to be very clearly, explicitly, an anti-Conservative Party,” he insisted.

“It’s clear to me that we have to be a progressive, anti-Conservative party – frankly, that’s what I always have been, I’ve fought the Tories all my life.”

When it was pointed out he was a coalition minister for five years, including three in the Cabinet, he hit back: “Yeah and I fought them in the Government.

“I fought the Tories every single day and I beat them a lot of the time.

“I didn’t learn to love them, I can tell you that. 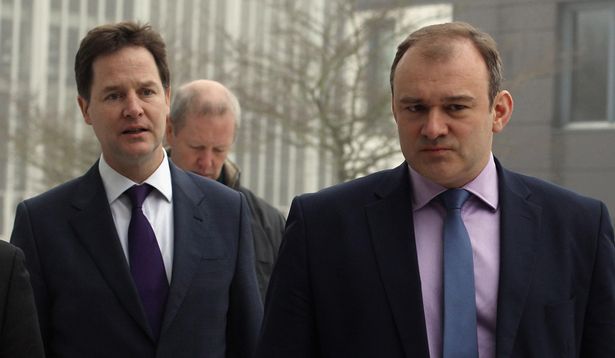 “Having seen what they are like, I am even more determined to take them on.

Sir Ed accused his party of failing to learn lessons from its 2015 meltdown, when it sank from 48 MPs to eight, and the 2017 poll, when it won just 12 seats.

It currently has 11 MPs.

Sir Ed, who was Ms Swinson’s deputy, described the general election as a “trauma” – and distanced himself from the Lib Dems’ controversial plan to revoke Brexit without a second referendum. Ms Swinson pressed the policy despite warnings it would alienate Leave supporters and some Remainers.

“I didn’t contest it because I think Jo and the party activists who were promoting it, they needed to push it forward,” he said.

“It will be examined as an issue in the general election review.

“But I supported it, it was in the manifesto and I backed that.

“But I still believe it’s very important that we reach out to Leave communities. I believed that then, I believe that now.” He refused to say whether the Lib Dems would campaign to take the UK back into the EU, or trigger another referendum.

He believes focusing on climate change is key to a Lib Dem fightback, saying: “It will be one of my main themes – there will be one or two others, should I decide to stand.”

“I have campaigned for 30 years on the environment,” he said.

“Climate as an issue has come way up the opinion polls in a way in which we used to dream of.

“It’s an issue we can connect to voters with better now than we have ever been able to.

“Now’s the moment for us to be the climate champions which I believe we are and always have been.”