Lord Frost calls for change to NI protocol – ‘Opportunity to move past difficulties!’

In an upcoming speech Lord Frost, the Brexit Minister, will tell diplomats this week to end the ‘sausage war’ with the European Union by changing the Northern Ireland Protocol. The protocol allows the border between Ireland and Northern Ireland to remain open after Brexit.

The European Commission is set to table proposals on Wednesday, allowing British ‘national identity goods’ to keep flowing across the Irish sea into the province, which overturns EU’s ban on chilled meats including sausages.

During Brexit negotiations, all sides agreed that protecting the 1998 Good Friday agreement was an absolute priority, but the speech in Lisbon will argue an amended agreement is necessary to improve relations with Brussels.

According to the Daily Mail, in his speech, Lord Frost is expected to say: “No one should be in any doubt about the seriousness of the situation.

“That is why we are working to reflect the concerns of everyone in Northern Ireland, from all sides of the political spectrum, to make sure that the peace process is not undermined.

“The EU now needs to show ambition and willingness to tackle the fundamental issues at the heart of the protocol head on.”

He will add: “The UK-EU relationship is under strain, but it doesn’t have to be this way.

“By putting the protocol on a durable footing, we have the opportunity to move past the difficulties of the past year.

“Without new arrangements in this area, the protocol will never have the support it needs to survive.”

A UK government source told the Daily Mail: “Whether in London, Dublin, Brussels or Belfast, nearly everyone now agrees that the protocol isn’t working as it should.

“That is a big change from the start of the year and we are glad the Commission is now working on solutions.

“The real question is whether the EU is prepared for the scale of changes needed. The prize on offer is a stronger UK-EU relationship which is focused on the future.”

The source added: “Tinkering around the edges just won’t work. If the EU can’t show ambition and agree to significant changes to the protocol, we will have to use Article 16 to make sure arrangements are in place that do safeguard the Belfast [Good Friday] Agreement and the peace process.”

Vice-President of the European Commission Maros Šefčovič previously announced the EU hopes to bring forward new proposals for the Northern Ireland Protocol which he believes will be the basis for fresh talks with the UK to solve the crisis. 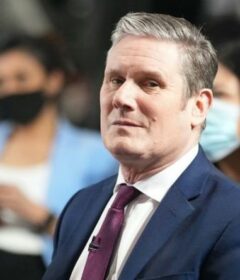