A humiliation at the ballot box in May would derail SNP hopes for second independence referendum, and Mr Johnson will use his flagship speech at the Scottish Conservatives’ online conference to energise Tory troops. The collapse in relations between first minister Nicola Sturgeon and her predecessor Alex Salmond has rocked Scottish politics, and recent polls on independence have seen the No vote back in the lead. Former Scottish Conservative leader Ruth Davidson yesterday (SAT) claimed the country had passed “peak Nat” with the “nationalist bandwagon” now “backfiring”. She accused the SNP of an “increasing stench of sleaze and scandal”  and appealed to people who have never voted Tory to back the party and deny Ms Sturgeon a majority. 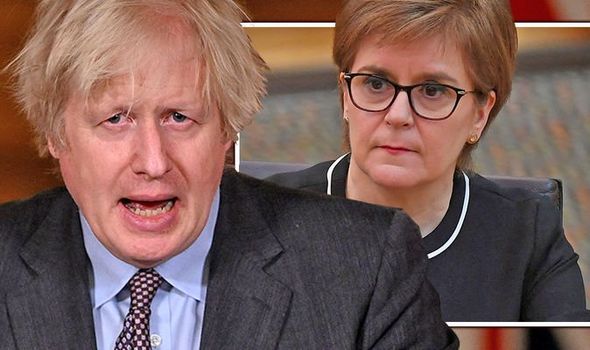 Until recently, there were strong expectations that the SNP could win an outright majority in the Edinburgh Parliament, and successive polls suggested Scotland would vote to leave the UK in a referendum. But Ms Davidson said an SNP majority is no longer a “‘nailed-on’ near-certainty”.

Ms Sturgeon is now under intense scrutiny of her handling of harassment complaints against Mr Salmond, and her deputy John Swinney last week faced a no confidence vote.

Tories are pushing for the findings of an investigation into allegations Ms Sturgeon broke the ministerial code to be published ahead of the election. If she was found to have misled the Scottish Parliament she would come under strong pressure to stand down.

Mr Johnson will tell the party today: “[It] is up to the Scottish Conservatives to again stop the SNP from winning a majority in May just like they did in 2016.” 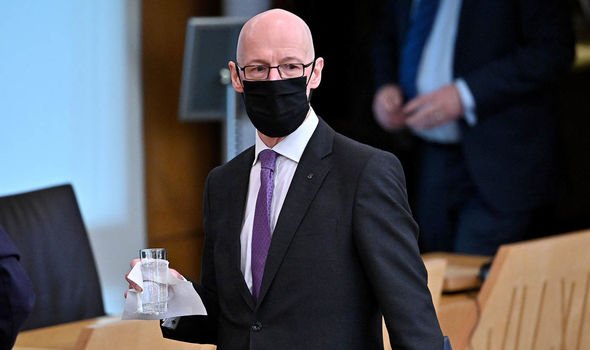 Praising Ms Davidson and newly elected Scottish leader Douglas Ross, who has backed the Express’s Unite The Kingdom crusade, he will say: “I know that with Douglas and Ruth, our very own dynamic duo, leading the campaign that we will find that the SNP are not as invincible as the pundits believe.”

Scottish secretary Alister Jack will use his speech today to stress the benefits for Scotland staying in the union.

He will describe the roll-out of Covid-19 vaccines as “a truly astonishing achievement” and “a task on a scale that dwarfs anything since the war”.

Mr Jack will describe the members of the armed forces, NHS staff, key workers and volunteers who have supported the vaccine effort as “the best of British”.

Making the case that the SNP’s woes have affected the quality of government in Scotland, he will say: “Time and again, the SNP have told fairy stories while playing fast and loose with the rules, imperilling the very foundations of the devolution settlement. We have seen an arrogant Scottish Government, distracted by internal bickering, taking the public for fools.”

Warning of the consequences of another independence vote, he will say: “It is chilling with the monumental task of recuperating from a pandemic still ahead, supposedly serious politicians can spend even a moment contemplating the reckless folly of another referendum.”