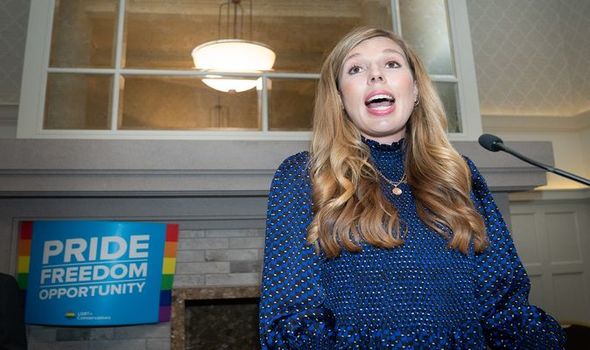 Heavily pregnant, she praised the Prime Minister while addressing a Pride reception organised specially for the Tory conference. With Mr Johnson and his sister Rachel in the audience, Carrie told the packed crowd: “As a backbencher, Boris broke the whip to vote in favour of repealing Section 28, as mayor of London he supported same-sex marriage.

“As foreign secretary he lifted the ban on British embassies abroad flying the pride flag, and as Prime Minister he has appointed the great Nick Herbert as the UK’s first special envoy on LGBT rights. And last year he extended same-sex marriage to Northern Ireland.”

She added: “Boris also wanted me to remind you that as mayor he led the Pride parade wearing a rather fetching pink Stetson, which I think we should encourage him to do again.” Mrs Johnson, 33, said it was “blatantly untrue” that being LGBT and a Tory is “somehow incompatible”.

She arrived at the conference in black trousers and a scarlet jacket costing £59.99 from Zara then changed into a blue dress for her speech. It is believed to be the first by a prime minister’s spouse at a conference event.