Home » Politics » Ramsey Clark, Attorney General and Rebel With a Cause, Dies at 93

Ramsey Clark, Attorney General and Rebel With a Cause, Dies at 93

Ramsey Clark, who championed civil rights and liberties as attorney general in the Johnson administration, then devoted much of the rest of his life to defending unpopular causes and infamous people, including Saddam Hussein and others accused of war crimes, died on Friday at his home in Manhattan. He was 93.

In becoming the nation’s top law enforcement official, Mr. Clark was part of an extraordinary father-and-son trade-off in the federal halls of power. His appointment prompted his father, Justice Tom C. Clark, to resign from the United States Supreme Court to avoid the appearance of any conflict of interest involving cases in which the federal government might come before that bench.

To fill Justice Clark’s seat, President Lyndon B. Johnson appointed Thurgood Marshall, who became the first African-American to serve on the Supreme Court.

Mr. Clark, a tall, rangy man who shunned a government limousine in favor of his own beat-up Oldsmobile, set an ambitiously liberal course as attorney general. Days after taking office, he filed the first lawsuit to force a school district — Dale County, Ala. — to desegregate or else lose its federal school aid. He went on to file the first voting rights and school desegregation suits in the North. 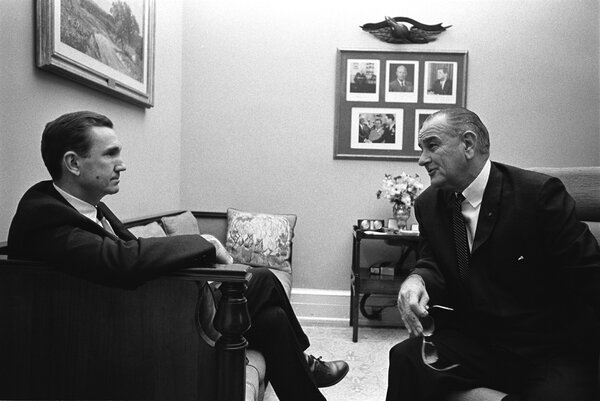 He also ordered a moratorium on federal executions and prison construction; banned wiretaps in criminal cases; and refused to enforce a law that was intended to countermand the Supreme Court’s restrictions on the questioning of criminal suspects under the so-called Miranda law.

Mr. Clark became such a liberal lightning rod that Richard M. Nixon, in his 1968 presidential campaign, repeatedly won applause by vowing to fire him. Indeed, Nixon had made him such an issue in the campaign that President Johnson blamed Mr. Clark, with whom he had had an almost fatherly relationship, for Nixon’s slim victory over the Democratic candidate, Vice President Hubert H. Humphrey.

After the election, Johnson stopped speaking to Mr. Clark and did not invite him to his final cabinet luncheon.

With Nixon in the White House, Mr. Clark went into private legal practice and soon devoted more and more of his time to representing the disadvantaged and the unpopular, including Alaskan Natives, war resisters, rioters at the Attica prison in New York State and Lyndon LaRouche, the perennial presidential candidate and conspiracy theorist.

He went beyond lawyering. In 1972, with the war in Vietnam dragging on, Mr. Clark met with Communist officials in Hanoi, the capital of North Vietnam, and publicly criticized American conduct of the war. That began a pattern: In 1980, months after Iranian revolutionaries had attacked the United States Embassy in Tehran and taken Americans hostage, he went to that city with nine other Americans, in violation of a travel ban, to help resolve the crisis and participate in a conference in which he criticized the United States for having supported Shah Mohammed Reza Pahlavi before he was deposed.

Six years later he met with Col. Muammar el-Qaddafi in Libya and denounced United States airstrikes against that country.

In November 1990, as the United States prepared for the Persian Gulf war, Mr. Clark, who had criticized the American deployment of forces in the gulf, consulted with Saddam Hussein in Iraq. The next year he filed a complaint with the International War Crimes Tribunal accusing President George Bush of war crimes.

In 2011, he condemned NATO’s bombing campaign against Qaddafi’s government. In 2013, he said Iran had no intention of building a nuclear bomb and denounced sanctions against that country. Later, he protested lethal attacks by unmanned American drone aircraft on other nations.

Mr. Clark defended these trips and these statements, saying that a citizen’s “highest obligation” was to speak up when his government had violated its own principles and “not point the finger at someone else.”

Saying that everybody deserves the best defense counsel, Mr. Clark lent his legal talents to Hussein as well as Slobodan Milosevic, the former Yugoslavian president accused of war crimes; a Rwandan pastor accused of abetting a massacre; the former boss of a Nazi concentration camp; and Sheikh Omar Abdel Rahman, who was convicted in the 1993 bombing of the World Trade Center.

His critics contended that he was in effect supporting the forces of evil, not the standards of justice. John B. Judis wrote in The New Republic in 1991 that Mr. Clark had “turned into a legal 911 for a tawdry collection of accused terrorists and neo- or ex-Nazis” and that he had “gone far beyond representing them in court.”

Nevertheless, in 2008, the United Nations General Assembly awarded Mr. Clark its Prize in the Field of Human Rights, which it gives every five years to human rights defenders. The U.N. commended him for speaking out against abuses by the United States in its campaign against terrorism. Past recipients included Eleanor Roosevelt, Nelson Mandela and the Rev. Dr. Martin Luther King Jr.

William Ramsey Clark was born on Dec. 18, 1927, in Dallas to Judge Clark and Mary (Ramsey) Clark, whose father was a justice on the Texas Supreme Court and head of the Federal Reserve Bank of Dallas. (She lived to 100, dying in 2002.) Ramsey spent his early years in Los Angeles and later remembered becoming fiercely opposed to capital punishment in the fifth or sixth grade.

In 1949, he married Georgia Welch, a classmate at Texas. (She also earned a master’s, in political science, at Chicago.) They had two children, Ronda Kathleen Clark and Thomas Campbell Clark I. Mrs. Clark died in 2010. Their son died in 2014.

Ronda Clark was born deaf, epileptic and profoundly intellectually disabled, and Mr. Clark cited her many times as an inspiration for his humanitarian efforts.

“Ronda is our great joy,” he said in an interview with The Dallas Morning News in 1996. “But more than that, she’s a great teacher. She has shown us the importance of patience, of discovery and love.”

His daughter survives him, as do a sister, Mimi Gronlund, and three granddaughters.

Beginning in 1951 and for the next decade, Mr. Clark worked alongside cousins and uncles in a Dallas law firm. He lost only one case, and helped form the city’s first legal aid society. In 1960, he worked on the presidential campaign of Senator John F. Kennedy, who, after he was elected, named him an assistant attorney general on the recommendation of Johnson, the new vice president and a longtime friend of the Clarks’.

Envoy to the Deep South

At the Justice Department, Mr. Clark rode herd over litigation concerning preservation of natural resources. Attorney General Robert F. Kennedy repeatedly sent him to the South to be a point man in the civil rights struggle there, not least because of his Texas drawl. Mr. Kennedy called him “the preacher” because of his opposition to Mr. Kennedy’s aggressive use of wiretaps to catch mobsters.

In 1965, Mr. Clark was named deputy attorney general, the No. 2 job in the Justice Department under Attorney General Nicholas deB. Katzenbach. In that post, Mr. Clark was the chief federal government officer present at the Selma-to-Montgomery civil rights march in 1965. That same year he was appointed chairman of a task force that investigated urban unrest after the Watts riots in Los Angeles. He helped draft the landmark Voting Rights Act of 1965.

He was named acting attorney general in October 1966, after Mr. Katzenbach left the Justice Department to be an under secretary of state. He was officially named attorney general the following March.

The closest historical correlate to his father’s resignation from the Supreme Court to make way for him was when Charles Evans Hughes was appointed chief justice in 1930. His son, Charles Jr., then resigned as solicitor general, the lawyer who represents the federal government before the court.

As the Vietnam War came to dominate the Johnson administration, Mr. Clark later said, the president was well aware of his opposition to it and expelled him from the National Security Council, where attorneys general often sit.

But at other times Mr. Clark seemed to support the war. In 1967, he told the president that antiwar protesters had been infiltrated by Communists, the historian Robert Dallek wrote in 1998 in “Flawed Giant: Lyndon Johnson and His Times, 1961-1973.” Former Secretary of State Dean Rusk wrote in his memoirs that he had sat next to Mr. Clark in cabinet meetings for years and had never heard him criticize the war.

As late as 1968, while campaigning for Johnson in Wisconsin — before the president stunned the country by announcing that he would not seek the Democratic nomination again — Mr. Clark shouted at protesters, telling them that they should take their grievances to Hanoi.

That same year, in Boston, he began the prosecution of five antiwar activists, charging the famed pediatrician Dr. Benjamin Spock, the Yale chaplain William Sloane Coffin Jr. and three other men with conspiring to undermine selective service laws. Four of the so-called Boston Five were convicted, but two of the convictions were overturned on appeal. The remaining defendants, Mr. Coffin and the author Mitchell Goodman, were ordered retried, but the government dropped the case.

A Sense of Guilt?

Some have postulated that Mr. Clark’s later radicalism grew out of a sense of guilt over this prosecution.

“Standing by, being attorney general during the Vietnam War without resigning, is not a particularly heroic position to have taken,” Melvin Wulf, Mr. Clark’s former law partner, said in an interview with The New York Observer in 2005. He wondered aloud if Mr. Clark’s more recent, controversial actions represented “atonement.”

In 2003, in the magazine Legal Affairs, David McReynolds, a longtime member of the War Resisters League, said he believed that Mr. Clark had been “haunted” by the prosecution of the Boston Five.

Three years after that prosecution, Mr. Clark defended the Harrisburg Seven, antiwar activists led by the Rev. Philip Berrigan, the radical Roman Catholic priest. They were charged with 23 counts of conspiracy, including plotting to kidnap Henry A. Kissinger, then the national security adviser.

The prosecution took five weeks to present its case. Mr. Clark, arguing for the defense this time, took just minutes to make his.

“Your honor, the defendants shall always seek peace,” he said. “They continue to proclaim their innocence. The defense rests.”

The jury deliberated for 59 hours before declaring itself hung. The entire case was later thrown out by a federal appeals court.

Mr. Clark became an office seeker in 1974, when, as a Democrat, he tried to unseat Senator Jacob K. Javits of New York, a Republican. Holding to his principled positions, Mr. Clark often told voters what they did not want to hear. He advocated gun control legislation in speeches to hunters and told defense industry workers that their plants should be closed. He lost convincingly. He ran again for the Senate in 1976 but came in third in the Democratic primary behind Daniel Patrick Moynihan, the nominee, and Representative Bella Abzug.

Mr. Clark was the author or co-author of several books, including “The Fire This Time: U.S. War Crimes in the Gulf” (1992) and “The Torturer in the Mirror” (2010), with Thomas Ehrlich Reifer and Haifa Zangana.

He was also one of the most quotable public figures of his generation, many of his pronouncements tending toward aphorism:

“The measure of your quality as a public person, as a citizen, is the gap between what you do and what you say.”

“There are few better measures of the concern a society has for its individual members and its own well being than the way it handles criminals.”

“A right is not what someone gives you; it’s what no one can take from you.”