With blonde hair and red boots to match her lipstick, Shonette Bason-Wood is a force of nature.

After raising four children as a single mother, she quit her teaching job to set up a motivational teaching company which quickly turned over up to £250,000 a year and employed eight staff.

But then the pandemic hit and turnover dropped by two thirds.

“My business went from thriving to literally full stop within a matter of five days from the first lockdown,” she explains.

“I felt like everything I built – that baby that I had grown – had all gone and I did think about the end, I genuinely did. And I’ve got four children who I absolutely adore, who are adults and that’s what brought me back – and my dog as well.” 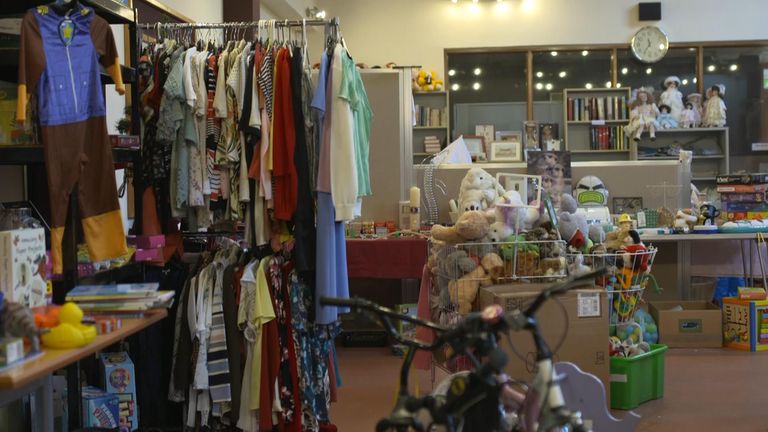 Ms Bason-Wood furloughed her staff, but was ineligible for support herself so she took a job in a factory to make ends meet.

“I was putting out my CV and having to dumb down my qualifications because people don’t want somebody who has run their own business because they’re probably going to be super bossy. I couldn’t even get delivery driver jobs.

“But I’m not a person who can just sit and cry and hug my pillow, and the factory was the place that was hiring.”

Ms Bason-Wood runs a charity that has fed 350 families this Christmas in Teesside, but she is now facing hardship herself. “I feel like I’m swimming, swimming, swimming, grabbing onto life rafts, letting go, going for another life raft and it’s like, ‘can someone get me back to my beautiful life please?’

“Now reality is creeping in, so I’m thinking, shall I give my car up? What am I going to do about my house? What things can I cut back? And that’s a real scary situation.”

This week, Sophy Ridge on Sunday visited Middlesbrough to investigate the COVID jobs crisis. According to the Institute for Public Policy Research, areas of the North East are experiencing levels of unemployment not seen since 1994, with Blackpool, Middlesbrough and Hull worst affected.

More than 800,000 people have lost their jobs since the start of the pandemic, with hospitality and retail the worst impacted sectors, but the true impact is unlikely to be felt until the furlough scheme is withdrawn. So far the young and low paid (often in jobs that can’t be done from home) have borne the brunt of the economic crisis.

But there is evidence that an increasing number of middle-class people – like Ms Bason-Wood – are struggling too. Before the crisis just 10% of universal credit claimants were from the top fifth of earners and 9% in the second highest bracket. But since COVID struck, the proportion has risen to 14% and 15% – with 29% of people claiming the benefit now from the higher-income brackets.

Paul Johnson, of the Institute for Fiscal Studies, told me “we have had the worst year of economic growth pretty much in history” and next year there is a risk that some of the two million people who have been furloughed since March “don’t actually have a job to go back to”.

He also believes there could be long-term shifts to the economy that could change the way we work forever.

“Usually when big changes happen, big crises occur. What they do is make things happen quicker than they would have done and I think probably that’s what’s happened here. There was a bit of a move to working at home, there was clearly a move from high street to online retail, there may be other changes which go in a bit of a different direction.”

One consequence of the move to working from home could be firms recruiting more from overseas.

“It may be that firms discover that if people do this stuff from home, why do they have to be in the UK at all, so there may be a change in the location of some of those jobs,” Mr Johnson said.

COVID-19 has changed how we work and shop, with Zoom calls and online delivery now part and parcel of our lives.

Of course, these changes were happening anyway, but the pandemic has hit the fast-forward button.

As with all economic shifts – particularly ones that are happening at breakneck pace – the shifts will be devastating for many.

Watch Sophy Ridge On Sunday live from 8.30am on Sunday with guests including Michael Gove and Lisa Nandy, followed by Sophy Ridge: The Take at 9.30am