The senator went from Donald J. Trump’s public enemy to his impassioned defender. Now he’s a golfing regular at Mar-a-Lago, advising the former president on his future. What is behind one of the unlikeliest partnerships in politics?

Lindsey Graham’s moment, it seemed, came on the evening of Jan. 6. With crews still cleaning up the blood and broken glass left by the mob that just hours before had stormed the Capitol, he took the Senate floor to declare, “Count me out” and “Enough is enough.”

Half a year later, a relaxed Mr. Graham, sitting in his Senate office behind a desk strewn with balled napkins and empty Coke Zero bottles, says he did not mean what almost everybody else thought he meant.

“That was taken as, ‘I’m out, count me out,’ that somehow, you know, that I’m done with the president,” he said. “No! What I was trying to say to my colleagues and to the country was, ‘This process has come to a conclusion.’ The president had access to the courts. He was able to make his case to state legislators through hearings. He was disappointed he fell short. It didn’t work out. It was over for me.”

What was not over for the senator from South Carolina was his unlikely — to many people, confounding — relationship with that president, Donald J. Trump.

For four years, Mr. Graham, a man who had once called Mr. Trump “a race-baiting, xenophobic bigot,” exemplified the accommodations that so many Republicans made to the precedent-breaking president, only more vividly, volubly and candidly.

But Mr. Graham’s reaffirmed devotion has come to represent something more remarkable: his party’s headlong march into the far reaches of Trumpism. That the senator is making regular Palm Beach pilgrimages as supplicant to an exiled former president who inspired the Capitol attack and continues to undermine democratic norms underscores how fully his party has departed from the traditional conservative ideologies of politicians like Mitt Romney, Liz Cheney and Mr. Graham’s close friend John McCain.

To critics of Mr. Graham, and of Mr. Trump, that enabling comes at enormous cost. It can be seen, for example, in Republicans’ efforts to torpedo the investigations of the Capitol riot and in the way the party, with much of its base in thrall to Mr. Trump’s stolen-election lie, is enacting a wave of vote-suppressing legislation in battleground states.

Mr. Graham, of course, describes his role in far less apocalyptic terms. Even as he proclaims — from under the hard gaze of a half-dozen photos of Mr. McCain — that the Republican Party is now “the Trump party,” even as he goes on Fox to declare that the party can’t “move forward” without the man who twice lost the popular vote, Mr. Graham casts himself as a singular force for moderation and sanity. 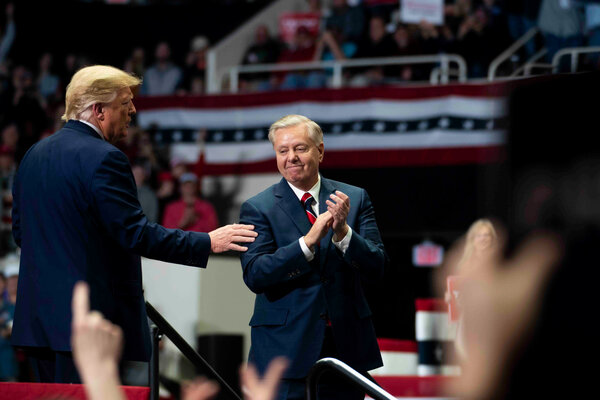 He alone can fix the former president, he believes, and make him a unifying figure for Republicans to take back both houses of Congress next year and beyond. To that end, he says, he is determined to steer Mr. Trump away from a dangerous obsession with 2020.

Many of Mr. Graham’s old friends on both sides of the aisle — and he still does not lack for them — grudgingly accepted as political exigency his original turn to Mr. Trump. His deviations from conservative orthodoxy, they understood, had left him precariously mistrusted back home. Now, though, they fear he has reached a point of no return.

“Lindsey is playing high-risk politics,” said Senator Dick Durbin, a liberal Democrat from Illinois who considers Mr. Graham a friend. “He is pinning the hopes of the Republican Party on a very unstable person.”

Over the last four years, pundits and political analysts have endlessly teased the question. Yet what emerges from interviews with more than 60 people close to him, and with the senator himself, is a narrative less of transformation than of gyration — of an infinitely adaptable operator seeking validation in the proximity to power. It is that yearning for relevance, rooted in what he and others described as a childhood of privation and loss, that makes Mr. Graham’s story more than just a case study of political survival in the age of Trump.

Raised just this side of poverty and left parentless early, Mr. Graham, 66, has from his school days chosen to ally himself with protective figures he calls “alpha dogs,” men more powerful than himself — disparate, even antagonistic, figures like Mr. Trump and Mr. McCain, the onetime prisoner of war so famously disparaged by Mr. Trump. Indeed, toward the end of his life, Mr. McCain privately remarked that his friend was drawn to the president for the affirmation.

“To be part of a football team, you don’t have to be the quarterback, right?” Mr. Graham said in the interview. “I mean, there’s a value in being part of something.”

It was in that role, amid unrelenting pressure from Mr. Trump and his sons, that Mr. Graham called Georgia’s top elections official in November to inquire about the vote tally in the state, which Mr. Trump lost by nearly 12,000. That call is now part of a criminal investigation of the Trump camp’s actions in Georgia.

Yet nothing Mr. Graham does or says seems enough to satisfy the Trumps. That has left the self-described conciliator struggling to generate good will on both sides of the political divide.

In mid-November, as he was publicly urging Mr. Trump to keep up the election fight, Mr. Graham made a previously unreported phone call to President-elect Joseph R. Biden Jr., to revive a friendship damaged by his call for a special prosecutor to investigate the overseas business dealings of Mr. Biden’s son Hunter.

It was short, and not especially sweet, according to three people with direct knowledge of the exchange. Mr. Graham told Mr. Biden that, in attacking Hunter, he had done only the bare minimum to satisfy Trump supporters back home. (A Graham spokesman disputed that account.)

Mr. Biden, who viewed Mr. Graham’s statement as an unforgivable attack on his family. responded by saying he would work with any Republican, but dismissed the approach as Mr. Graham trying to have it both ways, two people close to the president said.

“Lindsey’s been a personal disappointment,” Mr. Biden said a few days later, “because I was a personal friend of his.”

It is a truism of political biography that golf affords a window into both style and soul. And it has certainly played an important role in sustaining the precarious but durable Trump-Graham partnership. (That bond was on display in May, when the two men staged a Trump Graham Golf Classic fund-raiser, with an entry fee of $25,000.)

Still, the senator’s frequent impromptu trips to Mar-a-Lago remain a bit of a puzzlement to the former president.