In 1988, when James Zogby, the founder of the Arab American Institute, pushed Democrats to include a mention of Palestinian sovereignty in their platform, party leaders responded with a clear warning, he recalled: “If the P-word is even in the platform, all hell will break loose.” Eager to stave off an angry confrontation at the convention, the issue was shelved without a vote.

Now, with violence in Israel and the Palestinian territories forcing the issue back to the forefront of American politics, divisions between the leadership of the Democratic Party and the activist wing have burst into public view. While the Biden administration is handling the growing conflict as a highly sensitive diplomatic challenge involving a longstanding ally, the ascendant left views it as a searing racial justice issue that is deeply intertwined with the politics of the United States.

For those activists, Palestinian rights and the decades-long conflict over land in the Middle East are linked to causes like police brutality and conditions for migrants at the U.S.-Mexico border. Party activists who fight for racial justice now post messages against the “colonization of Palestine” with the hashtag #PalestinianLivesMatter.

With President Biden in the White House, traditional U.S. support for Israel is hardly in question from a policy perspective; he has made his support for the country clear throughout his nearly 50 years in public life. Still, the terms of the debate are shifting in Democratic circles.

On Thursday, a group of leading progressive members of Congress offered a rare break from party unity, giving fiery speeches on the House floor that accused Mr. Biden of ignoring the plight of Palestinians and “taking the side of the occupation.” Representative Alexandria Ocasio-Cortez of New York directly challenged the president, who had asserted that Israel had a right to defend itself. “Do Palestinians have a right to survive?” she asked in an impassioned address. “Do we believe that? And if so, we have a responsibility to that as well.”

The statement was signed not just by groups focused on Middle Eastern and Jewish issues but by groups dedicated to causes like climate change, immigration, feminism and racial justice — a sign that for the party’s liberal faction, the Israeli-Palestinian conflict has moved far beyond the realm of foreign policy.

“The base of the party is moving in a very different direction than where the party establishment is,” Mr. Zogby said. “If you support Black Lives Matter, it was not a difficult leap to saying Palestinian lives matter, too.”

Leaders of the country’s biggest pro-Israel lobby, American Israel Public Affairs Committee, or AIPAC, say they are confident of their support from the White House and Capitol Hill, pointing to continued congressional backing of several billion dollars in aid to Israel annually. Before Ms. Ocasio-Cortez and other liberals took the House floor on Thursday, other Democratic lawmakers offered their “unwavering and steadfast support” for Israel.

“Please don’t be fooled by false choices: Israel or Hamas,” Representative Ted Deutch, a Democrat from Florida, said in a floor speech. “If I am asked to choose between a terrorist organization and our democratic ally, I will stand with Israel.”

The Biden administration did not respond to a request for comment about the criticism from the left.

For decades, both parties offered almost unquestioning support for Israel, with words like “occupation” and “Palestine” considered far outside the acceptable debate in official Washington. But left-wing Democrats no longer shy away from such terms.

“We oppose our money going to fund militarized policing, occupation and systems of violent oppression and trauma,” Representative Cori Bush of Missouri, a Black Lives Matter activist now in her first term in Congress, said in her own floor speech on Thursday. “Until all our children are safe, we will continue to fight for our rights in Palestine and in Ferguson.”

Representative Rashida Tlaib of Michigan, a Palestinian-American from Detroit, referred to herself as “a reminder to colleagues that Palestinians do indeed exist, that we are human,” before condemning “Israel’s apartheid government” from the House floor.

The debate within the Democratic Party reflects a longstanding divide among American Jews, a mostly Democratic and secular group, who are enmeshed in their own tussle over how to view the Israeli-Palestinian tensions. An older generation sees Israel as an essential lifeline amid growing global anti-Semitism, while young voters struggle to reconcile the right-wing policies of the Israeli government with their own liberal values.

A survey released in the past week by the Pew Research Center found that two-thirds of American Jews 65 and older described themselves as emotionally attached to Israel, compared with 48 percent of Jewish adults under 30.

“The rise of identity politics made this almost inevitable,” said Daniel Gordis, senior vice president at the Shalem College in Jerusalem. “It looks like weak against the strong, the disenfranchised against the enfranchised, the stateless against the state.”

He argues in his most recent book, “We Stand Divided,” which examines the rift between American Jews and Israel, that the history of Jews and Israel should not be viewed through the same lens as the racial and political history of the United States. Israel’s experience is distinct, he said, because of Judaism’s biblical ties to its land and because the country was founded in part as a refuge from anti-Semitism after the Holocaust.

For some Jewish Democrats who consider themselves firm supporters of Israel, the relationship between former President Donald J. Trump and Israel’s right-wing prime minister, Benjamin Netanyahu, added a crassly partisan element to an already complicated issue. The former president closely aligned his administration with the embattled prime minister and delivered a long-sought Israeli goal of moving the American Embassy to Jerusalem.

In return, Mr. Netanyahu promoted Mr. Trump among Republicans and conservative Christians in the U.S., lifting his standing with the evangelical leaders who wield so much influence over the voters who proved vital to Mr. Trump’s electoral support. 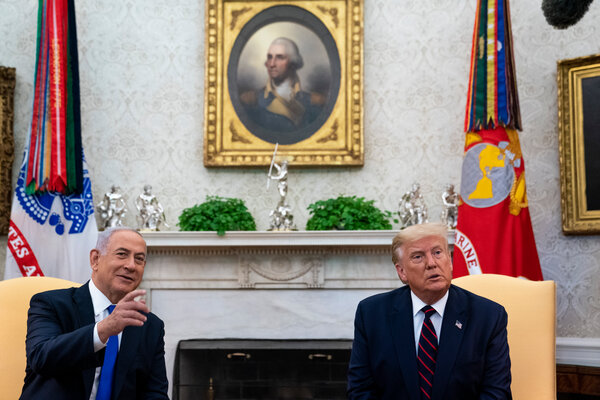 As many as a quarter of Jews in the United States vote Republican, the survey showed, a marked increase in the last several years. The shift has been driven largely by Orthodox Jews, whose numbers remain small but continue to grow.

The Pew survey showed that among Republican Jews, nearly three-quarters said they felt a strong attachment to Israel, while only 52 percent of Jewish Democrats expressed the same belief. Jewish Democrats are also much more likely to say that the United States is too supportive of Israel.

The shifting views on Israel and the Palestinians have not gone unnoticed by Jewish Democrats. In synagogue email exchanges and private WhatsApp groups, American Jews fret about whether there is wholehearted support for Israel in the party, posting details about solidarity marches and encouraging their members to stand united.

In his suburban Philadelphia congregation, Rabbi Shai Cherry worries that support for Israel has become even more divisive.

With the rise of Ms. Ocasio-Cortez and the left, and “the unalloyed support” for the Netanyahu government on the right, he said in an interview, there is a sense that “liberal American Jews are being squeezed.”

Like many of his congregants, he questions the policies of the Netanyahu government, but he said that now was not the time to debate finer points of policy. This past week, he sent an email to his congregants urging them to “stand united against those who wage war on the very existence of our one and only Jewish state.”

During his first four months in office, Mr. Biden devoted little attention to the Israeli-Palestinian conflict, an intractable issue that had bedeviled his predecessors. But the violence in recent days, the worst in years, has proved just how difficult that will be. And now, Mr. Biden finds his administration buffeted by conflicting forces within his coalition.

“Neglect is not a policy,” said Jeremy Ben-Ami, the president of the pro-Israel, pro-peace advocacy group J Street, who would like to see Mr. Biden more engaged in the region.

As the fighting has exploded, Mr. Biden has relied on a familiar playbook: full-throated support for Israel’s right to defend itself, and no mention of the Palestinians. He has expressed regret for deaths on both sides and has voiced hopes for “restoring a sustainable calm.”

Even advocates like Mr. Zogby admit that AIPAC maintains its hold on official Washington.

“Their influence in Congress is still enormous, but they’re losing ground all around them,” he said. “Can they still get a letter signed by 300 members? Of course they can. But is that where the debate is in the party?”

Some of the country’s most generous donors to Israeli causes and Democratic politics say they’re worried about the newer voices within their party.

“I’m a Democrat, and unfortunately there is an extreme left wing of the Democratic Party that could use some education on what’s in our American interest,” said Haim Saban, a prominent party donor who recently joined a nonpartisan organization started by Jared Kushner, Mr. Trump’s son-in-law, to promote relations between four Arab states and Israel. “On Israel there should be no argument. It’s the only democracy in the region and our staunchest ally in the region.”

In some ways, the shift in the Democratic Party began under the Obama administration, when Democratic officials, including Mr. Biden, pressed for the Iran nuclear deal. Mr. Netanyahu defied President Barack Obama’s wishes and spoke against the deal to a joint session of Congress, at the invitation of Republicans. The appearance angered many Democrats, particularly supporters of Israel who oppose Mr. Netanyahu’s policies.

Ron Dermer, the former Israeli ambassador to the United States, suggested in the past week that Israel should focus more on the “passionate and unequivocal” support of evangelical Christians instead of American Jews, who he said were “disproportionately among our critics.”

But many Jewish progressives say their criticism comes from a place of love and idealism. They argue that the Israeli and American governments would be wise to tune out some of the partisan language and move beyond what they call the false choice of being either pro-Israeli or pro-Palestinian.

“What most American Jews desire is to see Israelis and Palestinians living in dignity, in a just and equitable society,” said Rabbi Sharon Brous, the leader of IKAR, a large progressive synagogue in Los Angeles. “It is imperative that we support a third way,” she said, “recognizing the generational trauma and suffering of both peoples and creating a just and shared future for everyone.”