While Latinos played a major role in Democratic victories last year, Donald Trump’s outreach to them proved successful in states around the country, not just in certain geographic areas. 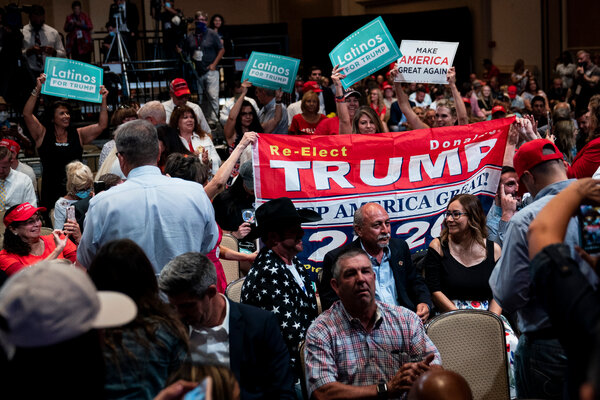 By Giovanni Russonello and Patricia Mazzei

Even as Latino voters played a meaningful role in tipping the Senate and the presidency to the Democrats last year, former President Donald J. Trump succeeded in peeling away significant amounts of Latino support, and not just in conservative-leaning geographic areas, according to a post-mortem analysis of the election that was released on Friday.

Conducted by the Democratically aligned research firm Equis Labs, the report found that certain demographics within the Latino electorate had proved increasingly willing to embrace Mr. Trump as the 2020 campaign went on, including conservative Latinas and those with a relatively low level of political engagement.

Using data from Equis Labs’ polls in a number of swing states, as well as focus groups, the study found that within those groups, there was a shift toward Mr. Trump across the country, not solely in areas like Miami or the Rio Grande Valley of Texas, where the growth in Mr. Trump’s Latino support has been widely reported.

“In 2020, a segment of Latino voters demonstrated that they are more ‘swing’ than commonly assumed,” the report stated.

Ultimately, Mr. Trump outperformed his 2016 showing among Latino voters, earning the support of about one in three nationwide, even as Joseph R. Biden Jr. won those voters by a roughly two-to-one margin over all, according to exit polls.

All told, close to 17 million Latino voters turned out in the general election, according to a separate analysis published in January by the U.C.L.A. Latino Policy & Politics Initiative. That represented an uptick of more than 30 percent from 2016 — and the highest level of Latino participation in history.