The deliberations over the long-shot bill center on three Electoral College votes the Constitution gives to the seat of government. 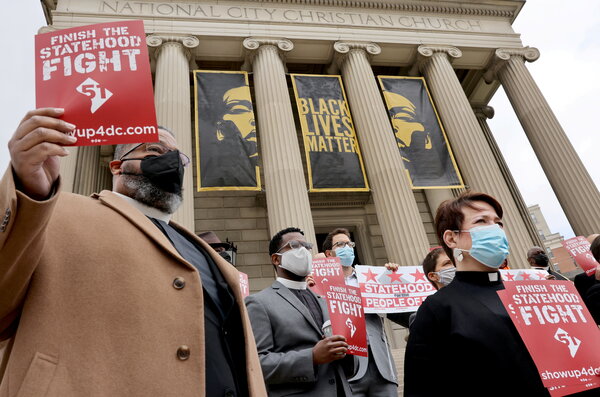 By Charlie Savage and Emily Cochrane

WASHINGTON — The Biden administration has quietly approached congressional Democrats about a potential change to their high-profile but long-shot effort to transform most of the District of Columbia into the nation’s 51st state, according to executive and legislative branch officials.

The bill, which passed the House last month but faces steep odds in the Senate, would admit the residential and commercial areas of the District of Columbia as a new state and leave behind a rump federal enclave encompassing the seat of government, including the Capitol, White House, Supreme Court, other federal buildings and monuments.

The deliberations center on the Constitution’s 23rd Amendment, which gives three Electoral College votes to the district in presidential elections. If it is not repealed after any statehood, the bill would try to block the appointment of the three presidential electors. But the administration is said to have proposed instead giving them to the winner of the popular vote.

Officials familiar with the discussion spoke on the condition of anonymity, citing the political delicacy of the matter at a time when Republicans have been raising legal and policy objections to granting statehood to the District of Columbia’s 700,000 residents. Such a step would create two additional Senate seats that Democrats would most likely win, as well as grant a vote to the lone representative in the House.

But a White House lawyer acknowledged the interbranch dialogue among Democrats, saying: “Admitting D.C. as a state is comfortably within Congress’ power — arguments to the contrary are unfounded. But we also think there are ways to allay the concerns that have been raised, and that’s why we’re working with Congress to make the bill as strong as possible.”

In late April, the White House endorsed the statehood bill in a policy statement. But a little-noticed line also hinted that part of the legislation, known as H.R. 51, had given President Biden’s legal team pause.

“The administration looks forward to working with the Congress as H.R. 51 proceeds through the legislative process to ensure that it comports with Congress’ constitutional responsibilities and its constitutional authority to admit new states to the Union by legislation,” it said.

If political conditions ever shift enough that the Senate someday approves granting statehood to the District of Columbia — which would become the smallest state by land area, though its population exceeds Vermont and Wyoming — Republican-controlled states are widely expected to sue to challenge its constitutionality.

The Supreme Court might dismiss such a case on the grounds that it raises the sort of question that the politically elected branches must decide. In 1875, it rejected a case challenging the 1845 retrocession to Virginia of a former part of the district partly on such logic. But if the justices were to reach the legal merits, they would confront several novel issues.

Democrats are said to generally agree that two legal objections Republicans have raised to the bill — that Maryland might have to approve statehood because the land was in that state’s jurisdiction before 1790, and that it might be unconstitutional to shrink the size of the federal enclave holding the seat of government — are less serious threats. They see those arguments as not supported by the explicit text of the relevant portions of the Constitution.