Toronto police say they are searching for two male suspects after an arson at a collision reporting centre in Scarborough early Wednesday.

Emergency crews were called to the building on Howden Road, near Birchmount Road and Lawrence Avenue East, around 1 a.m.

Police said it’s believed the suspects broke through the glass doors of the building, poured gasoline on the carpet, and lit it on fire.

No one was inside the building when crews arrived at the scene and no injuries have been reported.

Officers have not provided suspect descriptions.

Police said they were gathering video evidence at the scene Wednesday and are asking any witnesses to contact investigators. 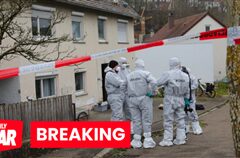