CAPE TOWN (Reuters) – When panic over the coronavirus spurred a run on hand sanitizer in Cape Town, gin maker Andre Pienaar realized there was something he could do with all the waste alcohol his small distillery produces. 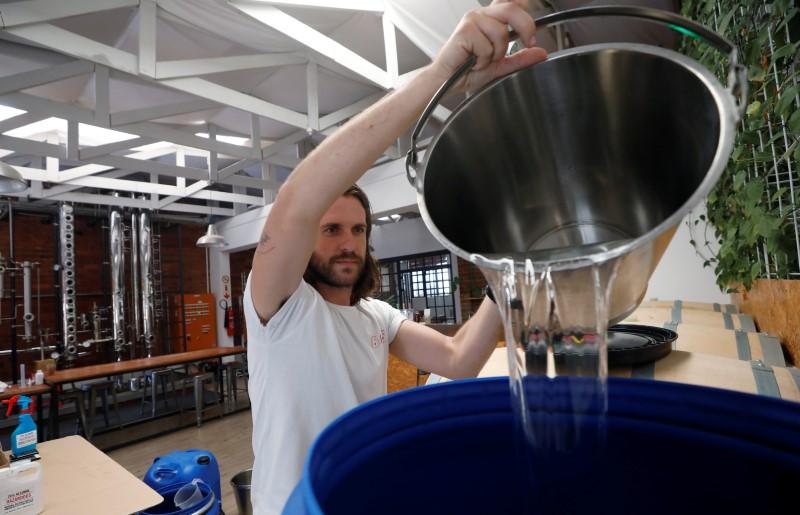 He had 140 liters of the 70 percent ethanol waste – called “gin heads” in the trade – just sitting around, so he posted on social media that anyone who needed some could have it for free to turn into the hand wash at home.

“The response was crazy. It was finished in three hours and there was a limit of one liter per person,” he told Reuters. He has now started selling the ethanol his Pienaar and Son Distilling Company is still producing.

“There is nothing on the shelves for people other than soap at the moment. It is just another option to help protect people,” he said.

Across Africa, dwindling supplies of sanitizer and surgical masks could prove a boon for entrepreneurs seeking to plug shortages. Amateur chemists in Nigeria and Kenya are mixing up hand wash, while enterprising tailors in Rwanda are sewing their own masks.

Health officials warn that wearing masks in public won’t protect you from the virus, and say sanitizer only works if it’s more than 60 percent alcohol – and even then soap and water are better.

But those warnings have not stopped customers flocking to Alexander Nshimiyimana, a tailor based in Kigali’s main market. He is using kitenge, a kaleidoscopic local fabric, to make masks that are not only cheaper but much prettier than the standard hospital-style ones.

The continent of 1.3 billion has recorded only around 1,100 cases in 43 countries, with 39 deaths, a fraction of the more than 305,000 people infected and more than 13,000 deaths worldwide. But there are concerns that Africa’s creaky health infrastructure could be overrun as the virus spreads.

“A mask will not protect you from the infection, it will protect others if you wear it from getting infected should you have symptoms. So in this respect also a piece of cloth works,” James Ayodele, spokesman of the Centre for Disease Control (CDC) Africa office.

Ayodele said that the CDC also advised against making sanitizer at home because it contains alcohol at a potentially dangerous high concentration.

“Sometimes, when you are out you cannot wash your hands. sanitizers can … make a difference,” she said