An airy restaurant in the Rockaway Hotel, a brick-and-mortar location for King David Tacos, and more restaurant news. 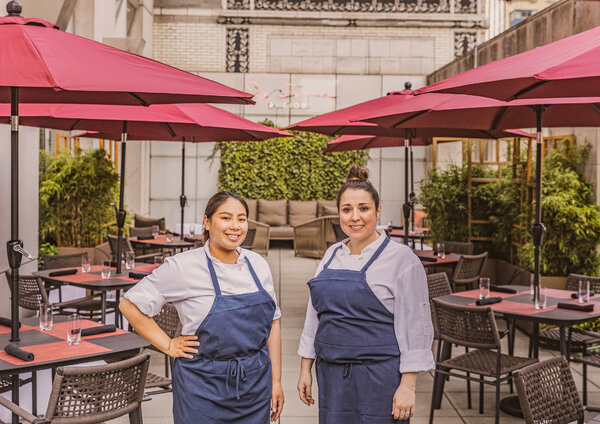 The Langham, a luxury hotel in Midtown Manhattan, is home to Ai Fiori, a serene Italian restaurant on its second floor. Now, an underused terrace on the 11th floor is being turned into an outdoor dining area, protected by red umbrellas, warmed with heaters and featuring a close-up view of the Empire State Building. It will serve cocktails and offer a dinner menu that’s an abridged version of the menu at Ai Fiori. The chef is Lauren DeSteno, the executive chef for Ai Fiori and a corporate executive chef for the Altamarea Group, where she oversees fine dining for restaurants including Ai Fiori and Marea. The chef Michael White, who was a founding partner of the restaurant group, is no longer involved with the company, according to Ahmass Fakahany, the founding partner who runs the company. Mr. White did not respond to inquiries from The Times. Now, Mr. Fakahany has been concentrating on promoting the women in his organization. “We have so much talent there,” he said. (In addition to Ms. DeSteno, Molly Nickerson has been the executive chef at Marea for the past two years, and Rachel Pancho is Ai Fiori’s pastry chef.) Osteria Morini and Nicoletta are the exceptions, in the hands of Bill Dorrler, also a corporate executive chef who oversees the many Morinis in the company’s portfolio. For the new terrace, Ms. DeSteno, 38, a Culinary Institute of America graduate who worked at Eleven Madison Park and has been with Altamarea for 12 years, has created a multilayered artichoke lasagna made with spinach pasta and a cloud of pecorino. She has not worked in Italy but has visited often. Her responsibilities with the company have also taken her to Dubai, the United Arab Emirates, and elsewhere in the Middle East. (Opens Thursday)