Some couples bond over music, movies or travel. For Nora Ganley-Roper and Adam Polonski, it was Scotch whisky.

When they started dating six years ago, Ms. Ganley-Roper, a manager at Astor Wines & Spirits in Manhattan, and Mr. Polonski, a senior writer at Whisky Advocate magazine, found they were both big admirers of Scotland’s independent bottlers, which purchase barrels of whisky from single-malt distilleries and sell them under their own label, sometimes after blending them together.

“I was writing a story about Scottish independent bottlers and asking myself, why isn’t anyone doing this in the U.S.?” Mr. Polonski said.

In 2018, they quit their jobs, put their things in storage and went on a yearlong road trip, touring as many distilleries as they could; along the way they got engaged. They eventually settled near Burlington, Vt., where they founded Lost Lantern, their attempt to bring the independent-bottler tradition to the United States. 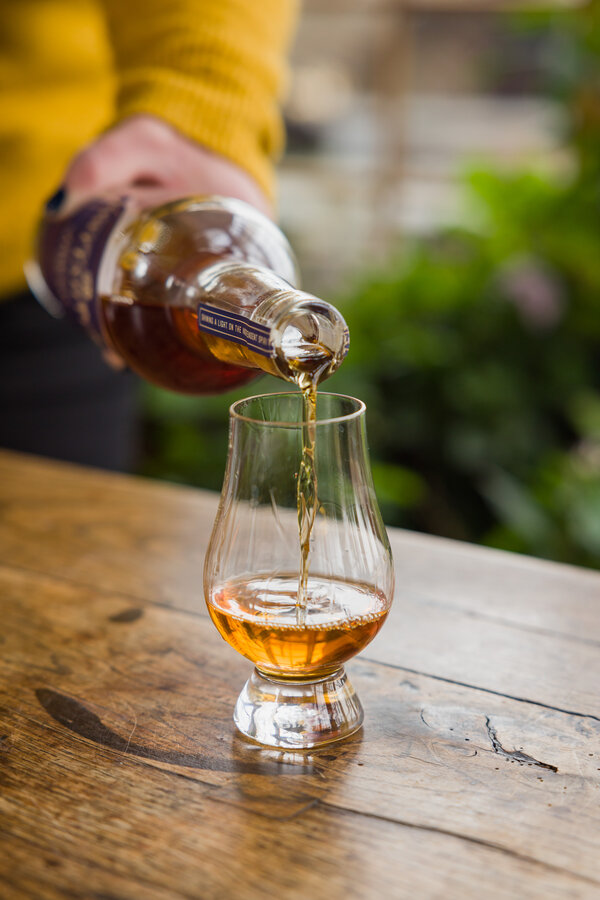 While blenders and independent bottlers dominate the Scotch industry, there has never been anything quite like them in the United States. That is starting to change: Joining Lost Lantern are companies like Barrell Craft Spirits, Four Gate Whiskey, Crowded Barrel Whiskey Company and Pursuit Spirits. In 2018 William Grant and Sons, the company that owns Glenfiddich single-malt Scotch, released Fistful of Bourbon, a blend of whiskey from five different American distilleries.

These companies address a growing problem in American whiskey. A decade ago, there were just a few hundred distilleries in the country; today there are more than 2,000, many of them too small to distribute their spirits nationally. That means that while liquor store shelves are overflowing with choices, they present an uneven cross-section of what is actually being made.

Companies like Lost Lantern, which often have wider distribution, bring order to the chaos by assembling those whiskeys into blends, or by offering single-barrel picks from distilleries that otherwise fly below the radar.

In October, Lost Lantern released its first blend, what Ms. Ganley-Roper and Mr. Polonski call a “vatted” whiskey composed of single malts from six distilleries, as well as four single-barrel picks from three other distilleries. In March, it released five more single-barrel picks, all bottled at cask strength, without cutting the whiskey with water. Another blend is on the way.

Lost Lantern is transparent about where its whiskey comes from — in fact, part of its mission is to shine a spotlight on small distilleries that many whiskey fans might otherwise miss. Among its first single-barrel releases were a corn whiskey made by Ironroot Republic, in Texas, and a bourbon from Cedar Ridge, in Iowa, two well-regarded distilleries that sell almost all their whiskey in-state.

“It gives us a chance to talk about these distilleries that, unless you’re really plugged in, you don’t know much about or have much access to,” Ms. Ganley-Roper said.

Mr. Polonski said that while some distilleries were apprehensive at first, they soon realized there was a huge upside to selling barrels to Lost Lantern: Not only would it win attention for their whiskey, but the implicit seal of approval that comes with being a Lost Lantern selection would give them an advantage over competitors.

Ms. Ganley-Roper and Mr. Polonski also hope that through its blending and single-barrel bottling programs, Lost Lantern can deepen a discussion already brewing around the emergence of styles unique to certain parts of the country.

Many New York State distilleries, for example, make intensely spicy, richly sweet rye whiskeys (including New York Distilling Company, one of Lost Lantern’s sources), while several distilleries in Texas and the Southwest smoke their grains over mesquite (a practice followed by two other Lost Lantern sources, Santa Fe Spirits, in New Mexico, and Balcones, in Texas).

“We believe in the regionality of whiskey, and we believe that certain choices can really showcase where a whiskey is from,” Mr. Polonski said.

Historically, American blended whiskey has been held in low regard, in large part because regulations allow it to contain as little as 20 percent whiskey, with the rest being neutral grain alcohol — vodka, basically.

But like Lost Lantern’s vatted whiskey, blends can also be simply a combination of various types of whiskey from distillers in various parts of the country — a possibility that offers a wide-open field for innovation.

That’s the idea behind Barrell Craft Spirits. In 2012 its founder, a former tech entrepreneur named Joe Beatrice, and his wife toured Tuthilltown Spirits, a craft distillery in Gardiner, N.Y. He came away thinking he could do the same thing.

Then reality hit: the upfront costs, the paperwork, the waiting for whiskey to age. “It took me exactly five days to realize I wasn’t going to be able to build a distillery,” he said.

What he could do, though, was buy barrels from distilleries, then blend them. He founded Barrell in 2014 in Louisville, Ky., and immediately began to build a massive “library” of whiskey, representing a palette of flavor profiles to draw on.

It can take Mr. Beatrice and his team a month to create a blend, which they release as a one-time production, never to be repeated (though Mr. Beatrice said he plans to start offering some regularly released whiskeys soon).

Done right, blending is like cooking, taking whiskeys with different flavor profiles — honeyed, spicy, caramel, smoky — and combining them into something cohesive and original.

“For us, it’s all about nuance, and finding new flavors and profiles,” Mr. Beatrice said. The goal of blending, he said, is to tease those out, “so that the whole is more than the sum of its parts.”

This kind of blending, aiming to create new flavors, not just cheaper whiskey, is common in Scotch. Compass Box, a company founded by an American expatriate named John Glaser, has turned out dozens of highly acclaimed blends, ranging in price from $35 to about $800.

Such an approach may be where American whiskey is headed. Every distillery has a house style, which can be both a mark of distinction and a limitation. And most distilleries have an incentive to keep their products consistent, year after year.

Companies like Lost Lantern and Barrell offer the opposite. To them, distilleries are making the raw ingredients, which they use to create a final, more complex whiskey. For drinkers always looking for something new, blenders and independent bottlers could offer a constant source of surprise.

It’s still a new idea in America, said Ms. Ganley-Roper, one that takes some whiskey fans aback — but just for a bit.

“We love that moment when people go in all apprehensive,” she said, “and then, suddenly, they say, ‘Aha!’”