Italy now has the highest number of coronavirus-related deaths outside China, having surpassed Iran. 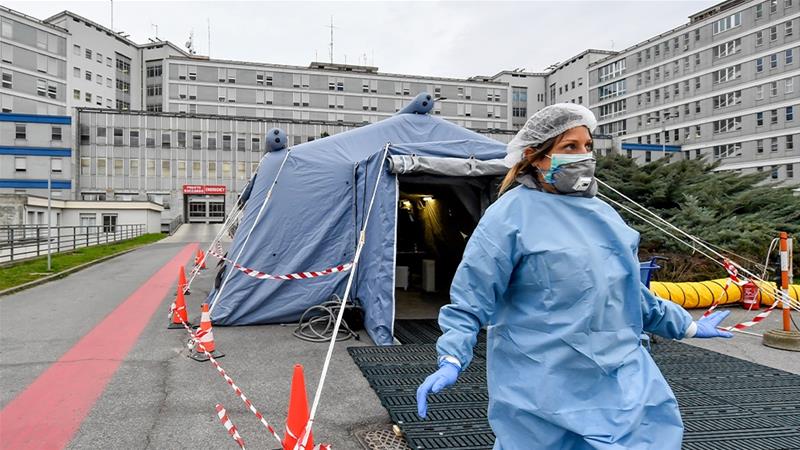 Italy’s health authorities are considering setting up a new quarantine red zone to try to contain the coronavirus outbreak in Europe’s worst-hit country, after the death toll and the number of cases jumped.

Twenty-seven people died of the highly contagious illness in Italy over the past 24 hours, bringing the total number of dead to 79, the Civil Protection Agency said on Tuesday.

As of Tuesday evening, Italy had the highest coronavirus death toll outside China, having surpassed Iran where at least 77 people have died.

The increase in deaths in Italy was the largest since the outbreak surfaced 12 days ago in the wealthy northern regions of Lombardy and Veneto.

It remains centred in the north, with Lombardy by far the worst affected, but it has since spread south and infections have now been confirmed in all but one of Italy’s 20 regions.

Shortly after the contagion first came to light on February 20, the government imposed a quarantine on two areas – one encompassing 10 Lombardy towns southeast of Milan, and another, smaller red zone in the region of Veneto to the east.

Inhabitants are blocked inside the affected towns and police prevent any outsiders from entering.

One of the dead was aged 55, the youngest patient so far to have succumbed to the illness in Italy. Another was a 61-year-old doctor who was not known to have underlying health problems, unlike the vast majority of previous victims.

“None of us can be sure about the future evolution of the disease. This is an important week to understand what will happen,” Angelo Borrelli, head of the Civil Protection Agency, told a news conference.

A high concentration of new cases has emerged around the city of Bergamo, northeast of the financial capital Milan, and the head of the National Health Institute told reporters a new red zone may be imposed there to try to stem the rise.

Among the new cases announced on Tuesday were two magistrates who worked in Milan’s courtroom and a newborn baby in Bergamo. It was not clear how the child contracted the virus.

The outbreak has heavily disrupted daily life in Italy’s most affluent and productive regions, with schools closed and many public events cancelled including fashion shows and top-flight football matches.

Vinitaly, one of the world’s largest wine fairs that is held annually in the northern city of Verona, announced on Tuesday it was postponing the 2020 edition from April to June.

Industry lobby Confindustria forecast on Tuesday that the economy, which was already teetering on the edge of recession before the outbreak, would contract in both the first and second quarters of this year.

National Health Institute chief Silvio Brusaferro urged Italians to wash their hands frequently, remain at least a metre (about a yard) apart, refrain from hugging each other and avoid crowded places.

“The most important recommendation is to adopt lifestyles that can help us interrupt transmission channels,” he said.

The Vatican on Tuesday acted to quell speculation that Pope Francis had contracted the illness after he cancelled a Lent retreat for the first time in his papacy.

The pontiff is suffering only from a cold and is “without symptoms related to other pathologies”, it said in a statement.

The disruption to the football season has upset millions of fans and sparked quarrelling among the sport’s administrators.

Inter Milan football club chief Steven Zhang labelled the president of Serie A a “clown” due to last-minute decisions made by league officials about whether matches should be played. He accused League officials of caring more about fixture lists than public health.

The head of Italy’s Olympic committee, Giovanni Malago, called for the arguing to stop.

“This does Italy no honour,” he told La Repubblica newspaper in an interview. “We have to tackle this in an adult way because we are facing an event that is not just rare, it’s unique.”