The weather front will affect most of the southern parts of the country on Thursday, with heavy rain showers and strong gales. Thanks to a high-pressure band, temperatures in the south will be mild for the most part of Thursday and Friday, but in contrast, the north will experience a big freeze, prompting BBC Weather forecaster Carol Kirkwood to warn the country will pretty much split in two. Ms Kirkwood warned: “Here is our weather front, it’s been with us all week, it’s not going anywhere yet.

“And on Thursday, it peaks and it starts to come a little bit further north.

“So we hang on to the mild air represented by the yellow ahead of the weather front.

“But on the other side of it, look at that: blues everywhere as it’s turning colder.

“So here we have our weather front with the cloud and also the rain – again don’t forget pivoting north – in south-west England and also Wales. 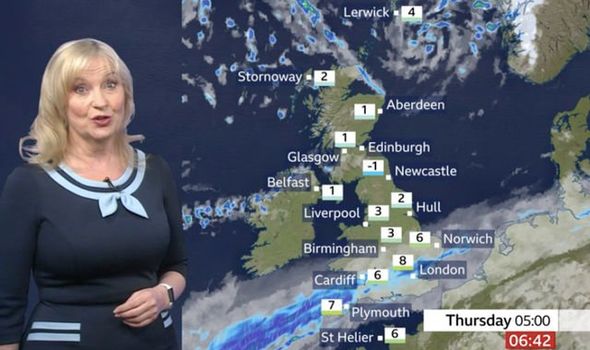 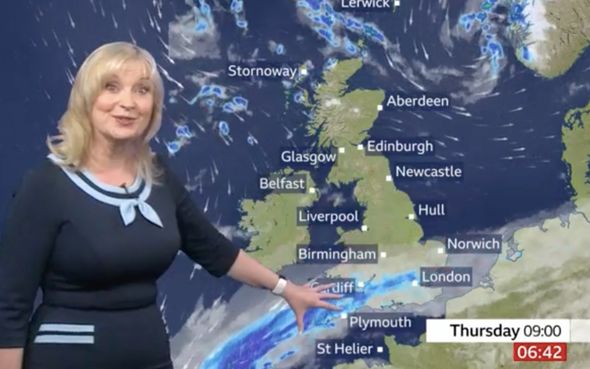 “We could see some patchy rain in the Midlands and even across parts of Essex for example.

“But as we push further north for the rest of England, north Wales, Northern Ireland and Scotland, you have a brighter day in prospect with some sunshine and still a little showers peppering the north and the west.

“The other thing about Thursday is that the wind are going to pick up, particularly through the English Channel. That will continue through the course of the night and also into Friday.”

She added that on Friday the lingering weather front in the south will “split the country in two” as winds and heavy rain will continue to batter southern England and western Wales.

Overnight between Wednesday and Thursday, temperatures may plunge to -1C in the north, while the south will see lows of 8C.

The Met Office has warned of a three-way split in the weather through the course of Wednesday.

They warned: “It’s a three-way split in Wednesday morning’s weather.

“A cold start in the north with showers on the way.

“Mild and cloudy in the south, and some rain in the middle.” 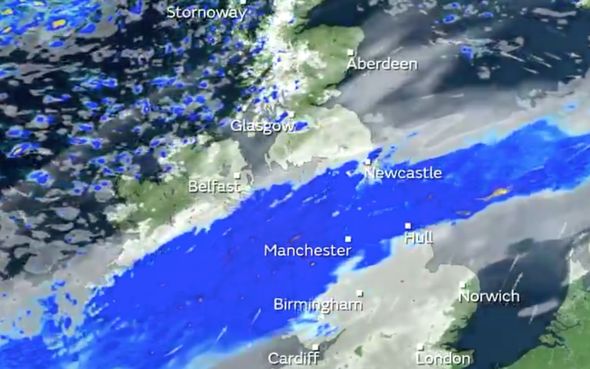 Temperatures reached 17C on Tuesday during what was the warmest day of the year so far. But by the end of this week, temperatures will nosedive to -3C in the UK and cold air will cause rain to pour.

There will be scattered snow showers in the north and east, with the -3C low hitting the south and north.

There will be frost and temperatures of 8-10C for the rest of the UK.

Temperatures are expected to improve next week, bringing much needed warmer temperatures to the UK.

The Weather Outlook forecaster Brian Gaze said: “The 18C warmest days of the year are possible before the chill, as floods finally ease.”